e=0. What Does That Mean for the Seasons?

Currently, Earth's eccentricity (orbital shape) is 0.0167086. Zero is a perfect circle whereas One is parabolic escape orbit and any greater becomes a hyperbola. And in the theory of the Milankovitch cycles, Earth's eccentricity varies between 0.000055 and 0.0679 over a period of 100,000 years. This affects the seasonality of planet Earth, as an extreme ellipsis can result in longer seasons.

Let us assume that Earth's eccentricity today does not exist, leaving it instead in a perfectly circular orbit. 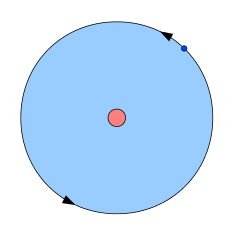 What would a circular Earth orbit mean for the seasons and the climate?

The eccentricity of Earth (e~0.0167086) means that the planet orbits in an ellipsoidal path that is 147.1 million kilometers away from the sun at its closest and 152.1 million kilometers away at its furthest (the maximum is 3.4% larger than the minimum). The energy output of the sun (as a blackbody radiator) is proportional to the Sun's temperature of approximately $5800K-6000K$ at the surface, which results in a power output of approximately $4.0×10^{26}\ W$. If we want to know how much solar power hits earth we typically look at the Watts-per-square-Meter Earth recieves. At a certain distance $r$ from the sun, the power per surface area is proportional to: $$ P_{total}/A_{total}=P_{total}/(4\pi r^2) $$ If you plug in the numbers for $P_{sun}$ and both $r_{min}$ and $r_{max}$ you'll get the following values: $$ 1471.04\ W/m^2 \ (at \ minimum \ distance)\\ 1375.92\ W/m^2 \ (at \ maximum \ distance) $$ and notice that that is a total change of less than 7%, which doesn't seem like nearly enough difference to cause sweltering summers and freezing winters in so many different places on Earth.

The Earth is tilted on its axis by $23.5^{\circ}$. The axis points toward Polaris (the North Star) throughout the year, which means that during part of our orbit the Northern hemisphere will be tilted a little more toward the Sun, and during the other half of the year the Southern hemisphere will be tilted more toward the Sun. However, we already know that distance changes don't change the $W/m^{2}$ received by much at all when we look at orbit changes, and orbital tilt is only going to change distances by a much smaller amount that eccentricity, so what is going on?

What does that all mean?

It means that fictional spacefarers or worldbuilders will have to be careful in choosing (or designing) their new Earth-like homes.

Difference in energy reaching us:

Using the relationship that $E \propto \frac{1}{r^{2}}$ we can compare the energy change at these different points.

This gives us an idea of the temperature difference between the circular and elliptical orbits. The earth's core provides some of our heat so this isn't a direct relationship, we need to add a constant for the Earth's sunless-temperature.

Gathering this sunless temperature, however, is rather difficult and would involve a lot of assumptions. We have that the power the Earth provides is $47TW$, however this heat transfer to the surface doesn't translate easily into a temperature.

Not the answer you're looking for? Browse other questions tagged hard-science climate orbital-mechanics seasons .

3
Getting Day-Night Cycle and Seasons for my Dyson Outies
4
How This Alternate Solar System Influences the Milankovitch Cycle
7
The (Alternative) Reason for the Seasons: Highly Eccentric Orbit
0
What would make a planet have 8 discernable seasons?
0
ELEVEN Inner Planets?! What Will the Ice Ages Be Like?
12
Is it possible to have a planet that has seasons and is also cold at the equator and hot both poles?
36
Fantasy map that has minimal land at the equator. What does this mean for rainforests and the world as a whole?
5
How Would These Planets Affect Earth's Eccentricity?
4
Could co-orbital planets also be double planets?