ELEVEN Inner Planets?! What Will the Ice Ages Be Like?

A Milankovitch cycle is defined in Universe Today as

a cyclical movement related to the Earth’s orbit around the Sun.

There are three elements to a Milankovitch cycle that affects the amount of solar heat and with it, the Earth's climate:

Precession as well as tilting are the reasons why regions near and at the poles experience very long nights and very long days at certain times of the year. For example, in Norway, the Sun never completely descends beneath the horizon between late May to late July.

In an alternate universe, orbiting a yellow G-type main-sequence star are not four Inner Planets, but eleven. 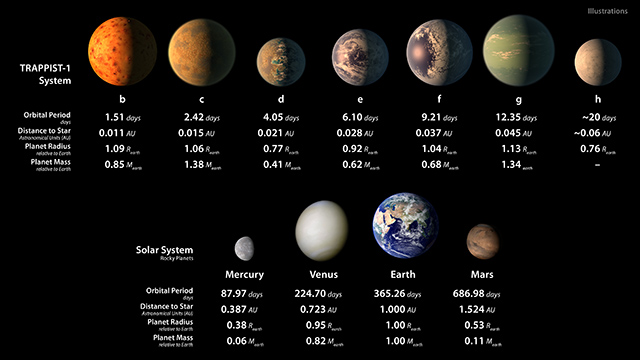 How will the changes listed above affect Earth's nightscape and its Milankovitch cycles?

You are missing at least one important feature. Size. "Oh Be A Fine Girl, Kiss Me" is one mnemonic for main sequence stars. O stars are the largest. Then comes B, A, F, G (our star), K, and M. The Trappist star is an "ultra-cool dwarf." Dwarf stars are smaller than M. There is a nice Wikipedia article: https://en.wikipedia.org/wiki/Star

You also need to consider if you have a binary or trinary system. However, working out reasonable orbits for even a binary is well past my abilities.

Stars change size with age: In about 5 billion years (give or take a few million), our star will run out of hydrogen to burn. It will then expand. Mercury, and Venus will be vaporized and Earth might suffer the same fate. Even if Earth survives, everything on it will not.

While Earth orbit is well within a class O star, it would be possible to move planets to get them into the Goldilocks zone for a particular star. The sky will be influenced by the gaseous composition of the atmosphere and the color of the star.

The answer is not any more complex than an identical question involving only a change in the Earths' moons' changing to a) more massive and b) more distant.

The insertion of Trappist-1 worlds as "Inner Planets" is Moot. They simply could not persist as solid bodies for more than a few minutes around our own sun at the distances stated. Gasses, whether atmospheric, or as a super dense mantle as our own gas giants have, would boil off almost instantly. Rocky, denser worlds would last longer, but as stated above, with more than 36x the energy that Mercury receives, a solid guess of a few minutes seems reasonable.

A no point would any of this affect any part of Earths' pre-existing Climate.

As far as your actual Milankovich Cycle question, it is limited to the changes that would occur with the difference in gravitational force, exerted on the Earth. Our own Moon exerts a force of N= 1.982E+20 whereas the new satellite would have a reduced force of N= 1.01E+20. While no change is without a "ripple effect", this small change in lunar gravitation would not affect the eccentricity, axial tilt or precession of Earth, and would have zero effect on the amount of solar energy at Earth's surface. Despite the snazzy graphic attached, there would likely be zero changes to Earths' Milankovitch cycle.

Not the answer you're looking for? Browse other questions tagged reality-check climate orbital-mechanics solar-system seasons .

4
How This Alternate Solar System Influences the Milankovitch Cycle