On Earth, land vertebrates generally have four limbs. Other creatures such as insects can have more limbs, but those creatures tend to be small. I'm thinking of creating an alien ecosystem with relatively large, vertebrate-like creatures (larger than insects and with some kind of endoskeleton). Is it realistic for those creatures to have more than four limbs (six is good enough) and if so, what conditions would make it more likely for such a thing to evolve? To be clear, I am not interested in four-limbed creatures evolving extra limbs (from what I've read, that would be quite difficult, perhaps impossible), but creatures that have six or more limbs from their common ancestor.

I have seen some information on this topic, such as:

Why would an animal need six legs?

What seems to be missing much of the time, however, is numerical calculations. I would like to have, as much as possible, hard data on aspects such as stability (especially under different gravity conditions), a nervous system's ability to control multiple limbs, and the energy cost of extra limbs. Another issue that seems to be dealt with even less often is the number of fins that is useful for a fish or fish-like creature. As land-dwelling vertebrates on Earth evolved from a four-finned creature, and some similar process may happen elsewhere, especially on Earth-like planets, data about the usefulness of more fins to a fish-like creature should be useful as well.

Hexapod mobility is something that's currently being studied in robotics. Ding et al. published a paper on the topic in 2010, where they discussed a variety of advantages that they saw in hexapod locomotion, such as:

A hexapod vertebrate would have similar advantages over a tetrapod vertebrate. For slow moving creatures, hexapod gaits would likely require less neural mass, since they're very statically stable. Faster moving creatures with more developed brains would likely rely on quadrupedal locomotion for speed, using the remaining two limbs as manipulators.

Beyond the question of feasibility in a terrestrial creature, the other pertinent question is whether six-limbed fish (or fish-like ancestors) would evolve. The most similar creatures to an ancestral fish, in terms of size, body plan, and ecological role, are likely the eurypterids, or sea scorpions. Like early vertebrates, eurypterids were mostly bilaterally symmetric free swimming creatures that used their limbs as paddles. Free swimming eurypterids generally had a single pair of primary swimming paddles, plus several pairs of crawling legs for moving along the bottom. Some eurypterids had an additional pair of grasping claws for manipulating their environments.

Interestingly, a similar gait has evolved in a modern fish: trigloporus lastoviza, though they've evolved a set of rays for locomoting across the ocean floor, rather than using their primary limbs. Ancestral hexapods would likely evolve on similar lines, but using primary limbs for sea floor locomotion instead of rays: four limbs for locomotion across the bottom of the ocean, an additional pair for swimming, and possibly an extra pair of limbs for manipulating their environments. Such an arrangement might even make it easier for them to transition to living on land, needing to transition only from crawling on the sea floor to crawling across the surface, rather than from swimming to crawling. The swimming limbs would likely either evolve to be used for locomotion or manipulation, or else be lost, leaving their descendants with four locomotion legs and two manipulators.

It is plausible with more copies of the Hox genes

The Hox genes control development along the head-to-tail axis of segmented animals such as vertebrates. They control a series of other genes that determine where limb buds begin to grow. 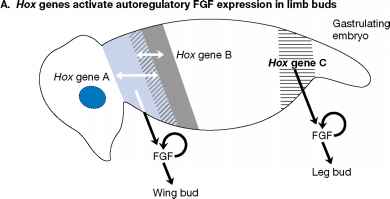 The Hox genes are highly conserved; that is, mutations among these genes are often fatal and therefore rarely seen. Most vertebrates have four clusters of Hox genes. However, a chromosome mutation such as translocation could theoretically duplicate some of the genes, producing extra copies which could produce another limb bud. This occurred in the telost fishes, which have 7 or 8 clusters of Hox genes, and which has produced a pre-mandible which these fishes use to protrude their jaws outward from their mouths.

There have been a variety of experiments transplanting limb buds onto embryos, using insects, amphibians, avians, and mice. See this 1907 paper. These limb buds develop into full limbs:

The intrinsic ability of the tissue itself to dictate the size of the growing organ was also highlighted in a transplantation experiment with two different sized salamanders where their limb buds were swapped. The limb buds of the larger species produced large limbs on the smaller hosts, and the limb buds of the smaller species produced small limbs on the large hosts (Twitty and Schwind, 1931). This result is consistent with the idea that limb buds are autonomous units programmed with the information necessary to produce the appropriately-sized appendage for the animal that will ultimately grow into an adult.

It is therefore plausible -- although rare -- that such a mutation could produce more than 4 limbs.

First a definition of limb from merriam-webster.com

a : one of the projecting paired appendages (such as wings) of an animal body used especially for movement and grasping but sometimes modified into sensory or sexual organs

The penis is definitely projecting, more or less. Does it qualify as a limb? According to the above definition, yes. Except it is not paired. You are skeptical. Then what if this sexual limb contained a rigid bone, like the arm? Bigger than an arm. A big bone. Like this walrus baculum, or "penis bone". 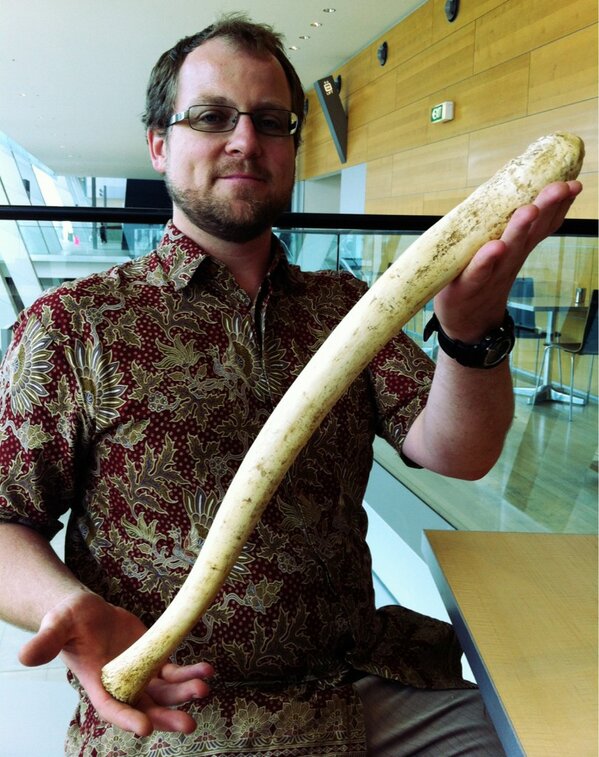 That is a sweet shirt, Dr Rowe.

A projecting fleshy part with a rigid bone inside of it is a limb by any measure, I think. Many (male) vertebrates have bacula and so qualify as 5 limbed, though most do not use this 5th limb for locomotion except in cases of extreme need.※ Could evolution further modify such a structure so that it might be useful for functions other than mating and possibly emergency locomotion? Might such a limb become prehensile, allowing the organism so endowed to, say, tip its hat in greeting? If it can happen to a tail or a finger, why not? The possibilities of the prehensile penis are ripe for exploration.

If I may add: calculations, schmalculations. Impossible in this circumstance. What are the numerical calculations relevant to evolving a tail? It is not just how big it is, but what you do with it, and what you choose to do depends on circumstance, ability, need and other variables. This changes not only generation to generation but minute to minute. It is not a process reducible to a single calculation.

※ I was hoping elephants, by virtue of the trunk, would qualify as 6 limbed. But like humans, elephants lack a baculum.

Not the answer you're looking for? Browse other questions tagged science-based creature-design evolution xenobiology .

2
Different vertebrates with four and six limbs?
11
What brain resources are needed per limb?
19
How to make my Beast-Of-Burden work?
4
Could a mammal evolve 6 legs?
8
Why would an animal need six legs?
7
How/why could dragons develop six limbs?
8
What sea-dweller did my hexaped Beast-of-Burdern evolve from?

5
Where is it most likely that an hexapod creature branched from the evolutionary tree
3
Could a tetrapod evolve from a hexapod?
3
On what conditions would a four-eyed creature evolve to have six eyes?
15
What would a hexapodal skeleton look like?
18
Would there be any major disadvantages for a species to have six legs instead of four?
7
Could a tetrapod Pegasus exist?
5
Could membranous wings work along with an exoskeleton?