Could membranous wings work along with an exoskeleton?

Essentially, my world has arthropod-like creatures with exoskeletons based on chitin, but while some are mostly like earth arthropods, one group specifically developed traits more observed in vertebrates, such as a jaw that opens vertically and structures slightly similar to lungs with air sacks, quickly diversifying into niches more commonly filled by vertebrates. However, I'd like at least one species of said vertebrate-like arthropods to be capable of flying similarly to pterosaurs, and by that I also mean having their wing structure and intricate membrane or patagium (which was made of skin, muscle, blood vessels and special fibers called actinofibrils, which helped stiffening the membrane in certain areas and minimize unwanted flapping), in something like the following sketch: 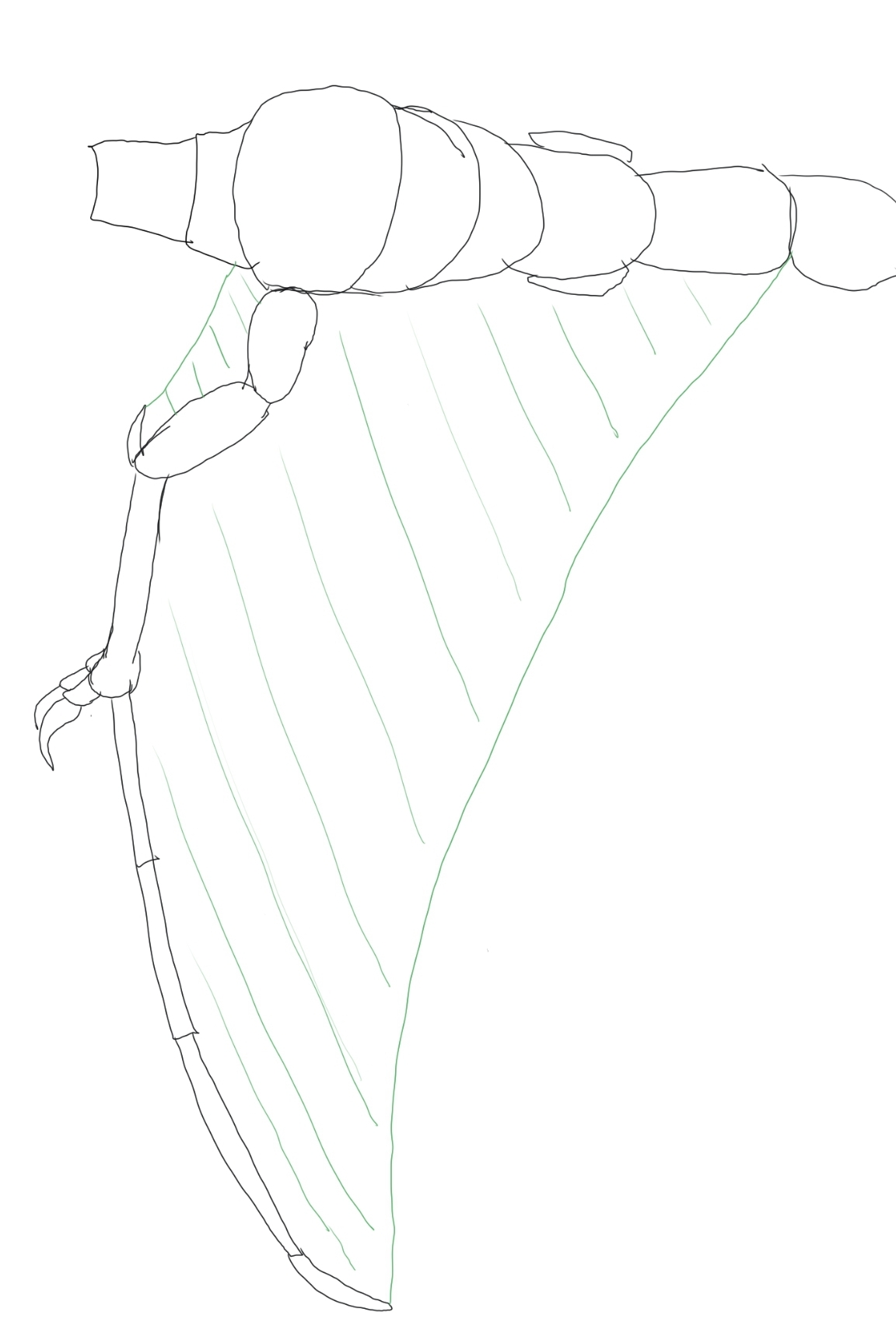 My main problem however is that powered flight only truly evolved about four times as far as we know, and all instances of limbs adapting into membranous wings belong to vertebrates, with arthropods having developed in a way that, as far as we know, didn't involve any limbs whatsoever and certainly don't rely into membranes to fly. Thanks to that, I'm struggling to find out whether something like the wings of a pterosaur could be replicated by a creature with an exoskeleton rather than an endoskeleton and skin. 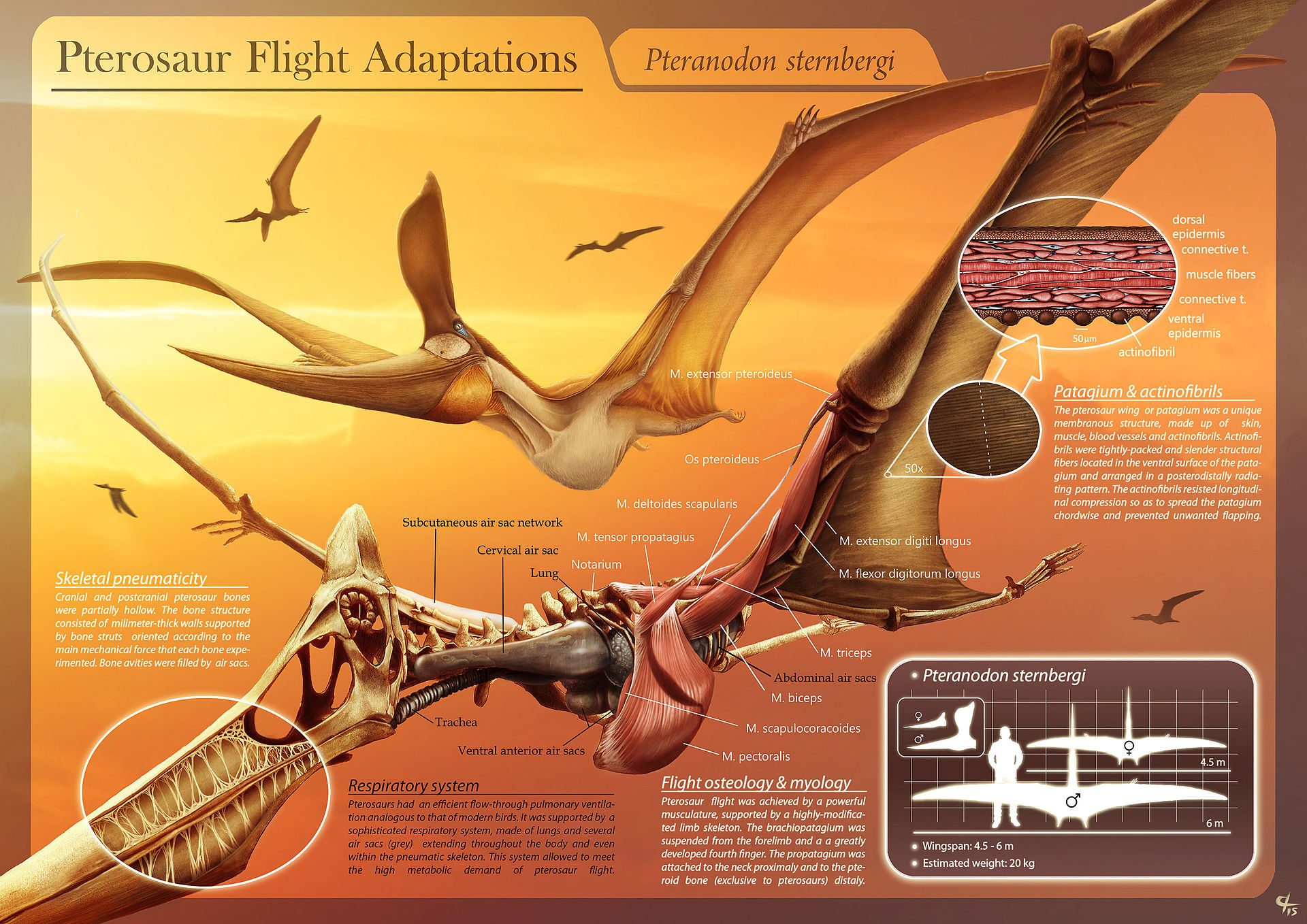 These creatures would ideally grow to be about a meter long, weighting roughly 8-10 kg and with a wingspan of roughly 2 meters. Their planet is similar to planet earth during the carboniferous period. They live mostly in open regions devoid of tall obstacles where vegetation doesn't hinder their flight. Their nymph stage is flightless and aquatic, with their wings only appearing at adulthood after they undergo a pupa-like stage, but I planned for them to live for a period of time of up to a few decades after reaching adulthood.

With that in mind, is there any way that a creature with an exoskeleton could specialize its limbs and part of its exoskeleton into functional pterosaur-like wings? My main concern is whether a membrane made of soft chitin (like observed in arthropod joints and the exoskeletons of some caterpillars and other larvae) layered with muscles would be able to work well enough or if I would need to essentially give them something akin to skin along with their exoskeleton. 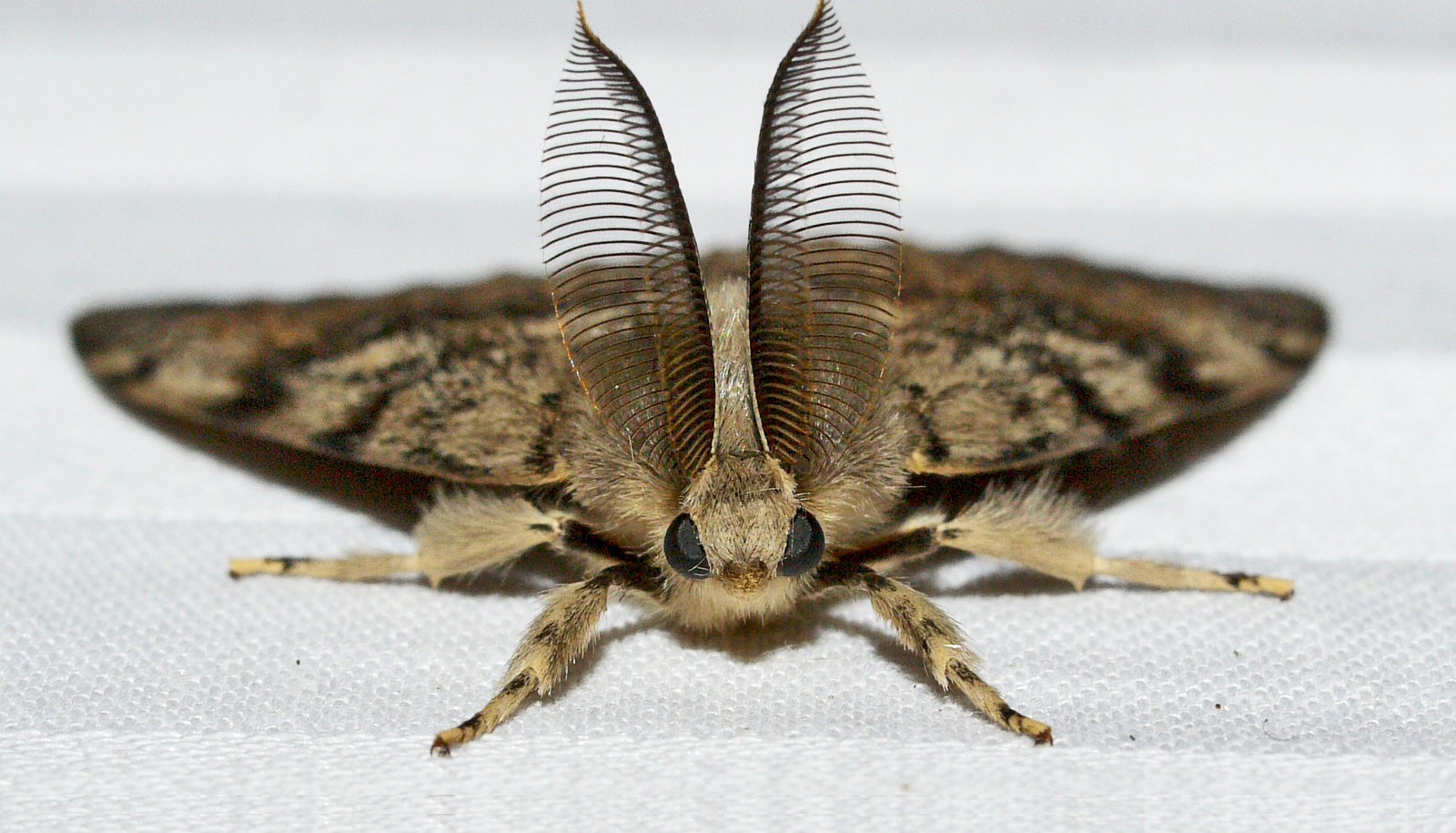 Insects have no troubles growing stuff on top of their exoskeleton in general, even dry, fluffy, and with live tissue as well. So, can it work as described in an adult insect-like creature? Yes

But insects rely on their exoskeleton for much more than just a shell. Their morph process relies on a lot of properties of the exoskeleton, their ability to shed it, their inability to expand it in general. And this is very important for them, as if they cant get from their early forms into their adult form, they cant exist.

This membrane you draw is outside of the exoskeleton, which means it must be thrown away during the morph. But mammals and birds membranes are alive, as their skin, insects 'skin' is not alive.

If you prefer the membrane to be alive, it must have channels through the exosceleton, like antennae.

If you prefer to keep the insect overall idea of keeping outside parts dead for protection, then membrane will be very short lived. Probably days at best.

So I assume membrane tissue is alive. Insects can do such a thing, like their antennae, but here is evolutionary problem. life almost never joins separate tubes from both sides. It is possible, like urinary tract or some blood vessels in humans, but chances of it are so rare that it just happened several times in history, and only for organ systems so old, that they define all mammals and even broader category. So i would exclude the possibility of some sort of well formed membrane with a few large openings in the exosceleton for nutrients. Too unlikely evolutionary.

So, options I see:

Short term, dead tissue wing, that is available after one of the moprhs, probably for breeding season. And then in a few days it falls off destroyed. Dead tissue cant stay flexible for a long.

Live tissue, two sided connection, but exoskeleton is no more exo, at least in that area. Lots of added infrasctructure will be needed to support the nutrient transfer, protection of it, gap into the inner body, and complex protection of it at the exosceleton edges to the gap. And gap will need to be along the whole membrane to allow gradual evolution, that is much more likely than connecting ends of a tube from both sides. Basicly this requires to reinvent the skin. It is still way more likely than the alternative with connecting tubes. And shed process to be able to grow will require to rip all of that away. Or grow from that gap to avoid the need to shed exoskeleton, but again, that is a huge evolutionary change. Or use it as a last stage of their life, never being able to morph again, and die shortly after.

Neither option is at the same time good and likely.

What you're going to want is a mesh or sheet of external or otherwise exposed muscular fibers that span the space between the limb and the main body. The extra muscles won't directly aid in flight(unless you're flapping in an horizontal in/out motion) but them having formed a 'membrane' that can be used to catch air while gliding or while flapping in a up/down motion will allow you to have some sort of membranous wing to make use of.

Their exposed nature will require them to be kept moist in a similar manner to gills lest you risk the cells drying out and getting damaged, the remedy to which I'll suggest being that whenever the wing limbs are furled or otherwise retracted then the exposed muscles retreat into a cavity in the body where various secretions will moisten it once more and keep the muscular fibers that make up the sheet/mesh of the wings healthy and functioning. The actual moistening fluid you might want to be oil-based though, as otherwise it might evaporate too quickly while in flight and will make your arthropods much more reliant on water sources and restrict them to environments near or with a lot of water.

Not the answer you're looking for? Browse other questions tagged xenobiology flight .

10
Alien Wings, a Different Design
14
How would a four or five winged creature, such as a microraptor, fly?
1
Bats With Pterosaur Wings
8
Can a feathered wing be also compliant?
6
Bee-like vertebrate flight surface
4
Humanoids with wings, how do they take off?
8
Scaling up the bat wing: still a good alternative for a large flying animal or inferior to a pterosaur wing?
7
Expected limits of adapting wings for burrowing
9
Compressible satellite ears?