On what conditions would a four-eyed creature evolve to have six eyes?

I'm designing an alien world on which its creatures evolved from four-eyed early life forms. However, there is a fair amount of other beings that have six or even eight eyes. How could such creatures develop six or more eyes out of just four? Did their eyes sort of slit up into more like a dividing cell? Or did their new pair of eyes gradually developed?

Note: Keep in mind, that the creatures of this world are vertebrates and not some sort of arthropods.

Adding more eyes to a rather complex species is not easy. The eyes of vertebrates differ very much from the rather simple eyes of insects and must have a certain form to be of any use. So your theory of eyes multiplying like cells doesn't work because the interim eyes loose their function. This is an evolutionary disadvantage and the mutated creature would probably die.

On planet Earth the only creatures with more eyes than usual (for their species) are connected Siamese Twins that have multiple heads. All of them (that I know of) have a harder time hunting and eating than their non-mutated conspecifics.

Another question is whether 6 eyes are any better than 4 eyes. There are many herbivores on Earth that have almost 360° vision with only two eyes (for example horses), so what is the evolutionary advantage of having 6? Growing eyes, the muscles that move them and the nerves connecting them to the brain is costly for a body. If a creature can survive with less eyes (and therefore save resources while growing up) it has a better chance of survival. So the evolution from 6 eyes to 4 is more likely than the other way around.

If there were ancestors with 6 eyes in the distant past that lost one pair over time, you could have rare mutations in their descendants that have reactivated the gene to produce 6 eyes. It works like (and would be as seldom as) humans being born with tails.

If spiders can do it, then your creatures can do it. Many species of spider have eight eyes, but some have six or fewer. See here for details. You're better off starting with eight in the common ancestor, then having some species that don't need such good 360° vision losing one or more pairs.

Can happen suddenly, in several ways.

In some organisms, extra eyes can easily appear. In the picture below, two extra eyes have fused to give a beetle a fully functional "third eye" in between the others.This was accomplished by knocking out a single gene which regulated the shape of the head. The amazing thing is that starting out with the wrong head shape, the rest of the self-organizing development works on top of that, building compound lenses and connecting neurons. 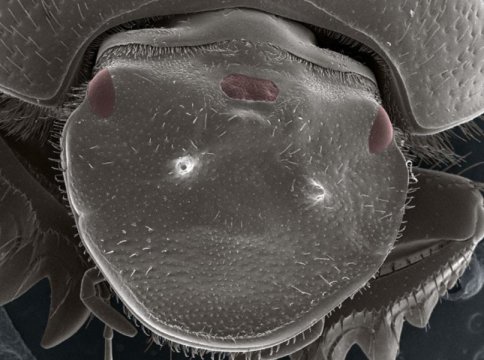 Another mechanism is seen in "Drosophilia", a fruit fly. We know that the flies' eyes and antenna develop from the same lump of about 23 cells, which split and differentiate into eye and antenna cells. A single mutation in the gene regulation cause all of them to develop to antennas, producing flies with no eyes and 4 antennas instead of two. Since antennas and eyes are so close in the development pathway, researchers speculate that they both evolved from the same organ. There may have been an organism with two "sense organs" on its head, then a mutation caused the animal to develop 4 sense organs. Through later mutations, the organs specialized into two eyes and two antennas.

So to answer your question: The extra eyes can appear suddenly, they don't need to gradually separate from the other eyes over several generations. If you are in need for an explanation, maybe a mutation in head or body shape caused extra eyes to be expressed (like for this beetle) or some organ that has a common origin with the eyes now get expressed as eyes (like in drosophilia)

If you want to read more, the term for developing organs in the wrong place is "ectopic organ". Eyes can even appear on a drosophilia's legs and wings, though in that case they're not properly wired up and nonfunctional. I do not recommend a google image search. :-)

Expanding on Mike's answer, according to this link spiders have eyes that more closely resemble peoples eyes, so I think some of the knowledge we have about spiders still applies here.

If your sun is intense and your world lacks a good atmospheric shield, ambient EM can be a problem for your life forms. They can grow thicker skins to deal with that, but eyes are inherently organs that have to be exposed to work. So you have a world where eyes are easily burned out. Solution: eyelids. Works great, except you only see in small bursts. Ah, but then a species develops multiple eyes, and the open and close eye lids in rotation. This provides downtime for the cells to do repairs without leaving the creature vulnerable to attack while blind. Imagine a human slowly blinking one eye then the other... now make it blink on eyes all the way around the head. Cool visual for a movie.

Since eyes on various levels will get different amounts of light, some species may develop specialized eyes, like ones under the chin that can see best in the dark.

Not the answer you're looking for? Browse other questions tagged creature-design evolution xenobiology .

61
What are the conditions in which a creature would evolve more than one brain?
3
How does an Alien world have Earthlike creatures?
22
Under what conditions would humanoids evolve eyes in the backs of their heads?
15
Could an organism see in infrared light as well as normal light, using its brain to process what it sees into a single image?
14
What would be the psychological differences between a human and an intelligent detrivore?
18
Would there be any major disadvantages for a species to have six legs instead of four?
7
Why would a blind creature evolve display features?
4
How can a creature evolve to have two separate food cycles?
3
Is my Bioluminescent, Four-legged, Bat Creature Possible?