Could a tetrapod evolve from a hexapod?

I'm thinking of an alien alien world that has a vast biosphere. Now the creatures of this planet have evolved to be hexapods though there are a few creatures that are tetrapods (only have four limbs). Now I though it would be more logical to assume that the tetrapods evolved from the hexapods, but I'm not sure if that could really happen. So, as the title says, can a tetrapod evolve from a hexapod?

Edit: On what conditions would a hexapod creature need to be "exposed to" in order to lose the extra pair of limbs? What would be the most likely reason as for why they became tetrapods and why would only a handful of them evolve like this?

Snakes lost their limbs because a certain gene may have turned-off their growth. The limbs are still defined by the DNA but are somewhat deactivated. A similar thing could happen to two out of the six limbs. The Earth analog is the greta oto butterfly.

"Could?" Of course it could.

"In what conditions?" Most likely a mutation.

Why? Because if all creatures have three pairs of legs, then you're kinda stuck with it. If your planet's biosphere has been dominated by hexapods the entirety of its existence, then all life would have been adapted to it. If it's efficient and it works, there is no need to change it.

Yes, what you are looking for has already happened (as @Christmas Snow and other mentioned, snakes are the brightest example). We humans have undergone a similar process when we lost the tail (you may want to look for vestigial organs, like the said tail-bone).

There are examples of creatures emerging from the sea, developing legs, only to get back in the sea and lose those legs (yea, I'm talking whales, dolphins and other sea-mammals).

Another example of limb loss (as pointed out by jamesqf) would be the flightless birds, like the ostrich, emu, and especially the kiwi: wiki. Though they still have vestigal wings, they are so small as to be practically invisible.

What you should be really asking yourself is why your creature have lost their pair of limbs. As is the case with whales, they lost the limbs because they were detrimental in the sea, or again, we humans have no much use for a tail once evolved the erect position.

So, your tetrapods should have a pretty good reason to have evolved four limbs when your enviroment clearly favours six.

I use "dragonoids" in the sense of a morphology similar to Western dragons - four legs and two wings, only without the wings.

As you suggest, it is far more likely for tetrapods to evolve from hexapods than the other way around. However, it is unlikely for an animal adapted to walking on six legs to lose one pair of legs without a compelling reason. After all, a species that is adapted to walking on six legs is not going to find it easier to get around on four, and you probably aren't going to go the snake route because burrowing with four legs isn't any easier than with six. A mutation that removes two legs from a hexapod isn't likely to outcompete its non-mutant siblings and is therefore unlikely to survive.

One compelling reason that could work could be that one branch of hexapods develops a highly specialized use for one of its pairs of limbs, and then loses this use but can no longer go back because the specialized limbs are too specialized. The most likely way for this to happen is if a branch of hexapods develops wings. Wings lose a number of important parts as they become specialized for flight, so it can be easier to get rid of a wing than to turn it back into a leg, which would explain why there are flightless birds with tiny wings (one, the now-extinct Moa, lost its wings entirely), but no birds that have returned to walking on all fours.

So you have a branch of small, bird-sized dragonoids that have already learned to walk on four legs. One branch of these dragonoids begins to grow bigger, and because these are not magical dragons there is a limit to how big they can get before they lose the ability to fly. Being big is still useful though, so it's not impossible for one branch of dragonoids to keep growing. But now the wings are completely vestigial and a waste of energy. So the dragonoids lose their wings. Later on, they branch out and diversify into a number of different four-limbed forms.

This is possible. Limb loss has happenned many times during evolution.

For example, it is currently thought that all arthropods evolved from this extinct myriapod, which would imply a lot of limb losing through the ages.

Do consider how evolution works. To go from six to four limbs, having just four has to provide some advantage comparing to the original six. That is the part that may be hard to justify. But let me give you some food for thought. This bug only has four limbs due to genetic mutation: 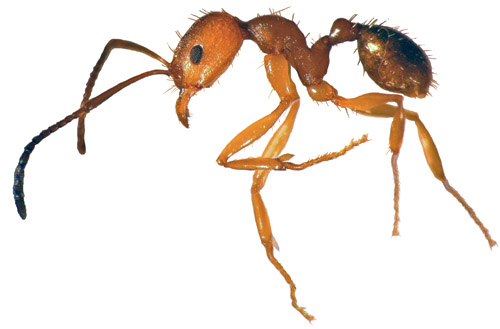 Source, along with the backstory of this find: http://www.myrmecos.net/2013/03/11/an-insect-with-only-four-legs/

Supposing this little ant can do well with just four legs, and if her caloric needs are reduced because of this, then four legs may become a trend in her species. And while proletarian ants don't reproduce, the bourgeoisie does, so if an antnest with lots of four-legged workers does better than others with six legs the genes for four legs will spread.

Ancestors of tetrapods are fishes with six fins. That’s the closest we can get to having hexapods.

Not the answer you're looking for? Browse other questions tagged reality-check creature-design evolution .

11
Vertebrate-like creatures with more than four limbs
3
On what conditions would a four-eyed creature evolve to have six eyes?
15
What would a hexapodal skeleton look like?
18
Would there be any major disadvantages for a species to have six legs instead of four?
5
Large flying creature on super earth?
7
Could a tetrapod Pegasus exist?
3
How would pinchers have to evolve to better manipulate tools?
18
Would an evolutionary predecessor for winged quadrupeds start with four legs and gain wings? Or start with two legs and wings and gain extra legs?
5
Dragon with pseudo-wings, is this viable?