Scanning for Resources and Mapping a Rogue Planet

EDIT: Thanks to Starfish Prime's answer to this it looks like the atmospheric ice would only be ~16m thick, and the water vapor is a rounding error. I have adjusted the layering to account for their answer.

I'm playing around with setting up an outpost on a rogue planet, and want to scan for deposits of various metals and minerals. Per Isaac Arthur's video on the subject, the original atmosphere will have frozen, covering the planet in layers of ice roughly following:

Per this article, there are many ways to scan for deposits. HiRise and CRISM only appear to scan the surface, and are also unsuited to this task. SHARAD in particular would reach, but I'm not sure if the snow, ice, and LOX would appreciably dampen its penetration.

I think Gamma Ray Spectroscopy is the best candidate, but given how small the wavelength is I don't know if it could penetrate the snow, ice, and LOX.

TL;DR: Is there any current (or extrapolated) scanning technology that would be able to scan for deposits in a planetary crust through 16 meters of ice and LOX, from orbit.

There are three important things here.

Now although the earlier requirements to look through a mile of ice have since been removed, but I'll mention this anyway: Radar images of the bed of the Greenland Ice Sheet. 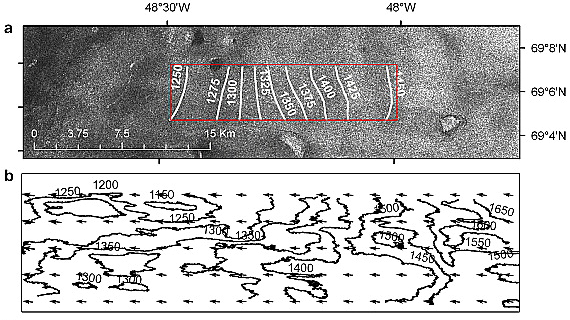 This is a synthetic aperture radar image assembled from scans by RADARSAT-1, a satellite which was launched in 1995, to give you an idea of how cutting edge this stuff is. The top image is the terrain of Greenland, and the lower contour map shows the depth of ice in metres above it.

Clearly it is possible to see through that much water ice (because I don't know if anyone knows if you can see through nitrogen ice this way... it seems likely but isn't guaranteed) and observe the terrain underneath, but that's all you'll be able to see. Smooshed subglacial terrain may be able to tell you something of interest (such as interesting signs of habitation or industry on the planet before it was ejected) but it won't tell you what sort of minerals might be available.

Next up might be magnetotellurics, a way of detecting disturbances in the planetary electrical or magnetic fields and using these to form a picture of subsurface structures. Though this is usually done on the surface (here's a plan to use this technique on a lander: A magnetotelluric instrument for probing the interiors of Europa and other worlds) characterisation of large scale geological features might be possible. Real world present day companies exist which use aircraft mounted magnetic and electrical field sensors demonstrating that contact with the ground is not essential for some survey work.

Resolution from orbit seems likely to be low, but might help identify regions of potential interest.

Gravimetry is the measurement of differences in gravitational field strength. It can certainly be done from orbit... the GRAIL satellites around the Moon and the GRACE satellites around the Earth performed detailed mapping of gravitational anomalies of the bodies they orbited, and this information will also be useful in establishing a baseline geological knowledge, identifying big and interesting masses in the crust of the planet and working out where to visit for more detailed investigation.

Finally, I'm gonna suggest reflection seismography. This is a modern-day geophysical exploration technique that you wouldn't expect to be able to use from orbit but:

You clearly have power to spare and there's nothing in your way.

Use LIDAR and related laser surveying devices to give you a good high-resolution view of the planet's surface, then get blasting. If it makes you feel better, you can class your orbital bombardment laser cannon as entirely peaceful surveying equipment... a kind of high-power LIDAR illuminator, if you will. You can carefully control the energy output, and use your "scanning" lasers to carefully measure refected seismic waves to plot underlying terrain shapes and geological features.

Unlike the passive investigation methods above, this very focussed probing can give you potentially quite high resolution subsurface imaging, and an excellent idea of what materials are actually down there, even from several hundred kilometres away (as you might expect to be, in a spacecraft).

Without some decent understanding of geology, interpreting the output of the laser seismometers will be challenging... this isn't a tricorder-like "bleep bloop dig here for uranium", but with sufficiently clever minds analysing the data you should be able to draw parallels with known geological features on other worlds and start making plans for a more hands-on investigation.

And lest you think this is purely scifi from someone known to have unreasonable opinions about lasers, I give you Seismology on small planetary bodies by orbital laser Doppler vibrometry.

Not the answer you're looking for? Browse other questions tagged science-based planets hard-science natural-resources .

6
What's the easiest way to locate resource deposits on a new planet?
4
How deep would the frozen atmosphere be?

13
Feasibility of conventional life evolving an a sub-zero climate
9
Exoplanetary Review: Rock Storms
4
Exoplanetary Review: Acid Rain
6
Geography and Appearance of an nitrogen/ammonia planet
11
Would Floating Islands Dampen Waves on a Water World?
11
What is the maximum orbital time for my moon around my planet?
4
Requirements for melting snow from orbit using EM radiation
6
How should the human respiratory system be changed to be able, in addition to oxygen, to breathe chlorine or hydrogen sulfide?