My (your) goal is to melt several tons of snow and ice in a small area using electromagnetic radiation beamed down from a spacecraft in orbit. The atmosphere that's in the way is vaguely Earth-like but with less oxygen and more nitrogen and carbon dioxide. The planet is comparable in radius to Earth.

I imagine the radiation would either need to be optical or radio to penetrate the atmosphere, but both these types of radiation are reflected by ice and would do very little to heat it, let alone melt it. Assuming an extremely advanced EM projection technology, that can create beams of energy with effectively perfect focus and massive amount of power:

What wavelength of radiation would be the best/most power-efficient choice for penetrating the atmosphere and melting the snow?

None. You want the radiation to be absorbed by the snow but not by the atmosphere. To get this information, you just need to compare the absorption spectra of air and snow/water, like it is done in the following chart (source) 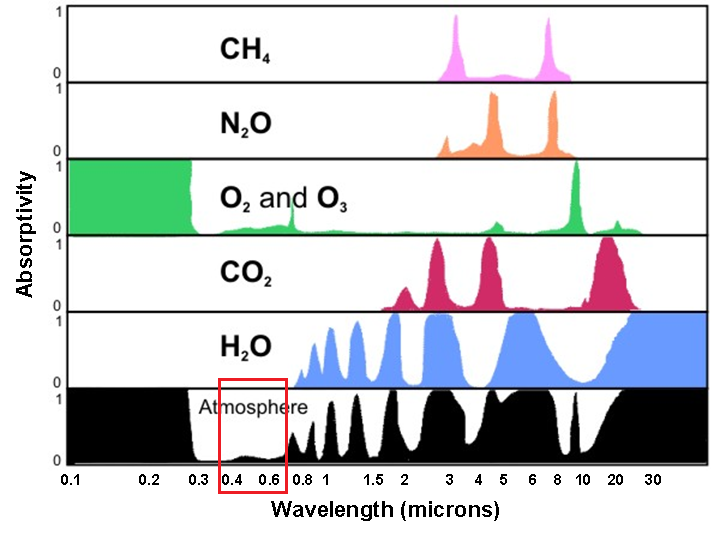 As you can see the absorpitivity of water and Earth atmosphere pretty much overlap, only around 5 microns water seems to be more opaque than air. But, being the absorptivity pretty high, you won't get a good result, since most of the beam will be absorbed by the air column.

You are better off painting the snow black, so that it absorb light more efficiently.

What order of magnitude of total energy would the emitted radiation be required to have to melt one ton of snow?

This is a trivial calculation, once you know the heat of fusion for water

The above calculation doesn't change during a blizzard. Since it will cool down the snow, it will impact the gross energy you need to supply, since part will be removed by the cooling down.

I googled a little something - an actual product that exists on Earth. Now, this product uses a halogen lamp to melt ice, and is advertised to be releasing the same kind of light as the sun.

Why did I bring this up? It's because a single wavelength of light won't be enough to melt ice. What you want is a mix of many different wavelengths, as shown by the graphs here. More importantly, consider the fact that this planet has an atmosphere. If it has an atmosphere as thick as Earth, the device you need needs to somehow disable/remove a part of the atmosphere for a direct hit. Otherwise, you need to consider what happens to the released E&M Radiation once it enters the atmosphere, because that's what's going to melt the ice. Problem with your laser idea is that while you could find the right wavelength to melt the ice, the atmosphere could block those wavelengths. South pole ice, for example, has a low absorbity at between 250-450 nm wavelengths of light, but this is useless if the atmosphere blocks it.

But I think this is all way too complicated. The game Spore has a heat-ray kind of like this that heats up planets to a level at which next-tier plants can grow (which will then stabilize the tier) but I've never liked it. I think what you need is to land something on the planet to heat it from the inside - literally pollute it like we're doing to our planet right now. Maybe some sort of robot that will burn hydrocarbons to the point that it causes global warming. It could take some time, but it could work. If you still like lasers, consider landing the robots to specifically laser the ice off directly, or to use the laser to heat up the atmosphere. Unless you make this large-scale, you also get to control how much of the planet melts this way.

Also consider messing with plate tectonics (if you have that ability). Large-scale volcanism can also be triggered given that it doesn't cause a nuclear winter. All options I've mentioned are very expensive, though.

EDIT: From comments we had a clarification that we are looking to melt a single structure that is covered by ice. For that reason, light between 200-500 nm would be good at melting off the ice if lasered in from within the atmosphere (ideally at a similar altitude/area to the ice, so the laser does not lose energy to other particles).

Ice and snow do not just reflect light and other E&M radiation, they let it pass through. So all you need is to heat up whatever is under the snow and and ice (hopefully not water).

In sunny days in February, the snow in my driveway melts way faster than on the lawn, and it melts from below. Precisely b/c the black surface of the driveway absorbs the heat of the sun a lot better than grass.

Radiant methods to melt snow are far and away the least efficient approach. Beam your microwaves to a battery charger, stick the battery into a snowblower, (and yes, people have built modded snowblowers which drive autonomously over a gridded area), and you're done.

Not the answer you're looking for? Browse other questions tagged hard-science atmosphere radiation ice lasers or ask your own question.

8
Attenuation of a laser in space?
10
If Earth Were Forged by Fire and Ice
16
How would a microscopic organism create kilometre long fibre optic cables from ice
11
What color should the snow be in this chlorine world?
15
Can I X-Ray a civilisation to death?
27
Would glacier 'trees' be plausible?
9
Does the beam quality factor M2 really ruin long range laser warfare in space?
7
1g Acceleration Spaceship Design
0
Scanning for Resources and Mapping a Rogue Planet