Feasibility of conventional life evolving an a sub-zero climate

My basic question is could life 'as we know it' (carbon DNA/RNA based, using water as the main solvent in metabolic processes) evolve on a planet where the temperature ranges from 16 degrees Celsius (at the equator in summer), to -120 Deg. C at the poles in Winter.

For anyone wanting more elaborate details:

The absolute average temperature is approximately -20 Deg C, the prior values representing the record high and low values.

Liquid water at the surface is primarily available from geothermal vents and snow melted by volcanic activity - both of which are spatially frequent and temporally consistent.

The planet has an solar orbital period of 1,050 hours (44 days), and negligible axial precession (IE the 'wobble' that causes Earth's seasons)

The planet has a rotational period, however, of 4,800 hours (200 days), and it's rotation counters it's solar orbit. This gives it an effective day of 3750 hours (156 days on Earth). The planet's day/night cycle consequentially defines its 'seasons.'

The planet's chemistry is Earth-like, mostly. The atmosphere is 68% nitrogen, 25% oxygen, 5% xenon, 1% argon, and trace gasses.

The planet itself is composed of 77% Silicon and silicates, 13% Iron, 5% carbon, carbides, and organic compounds, 3% Titanium, 2% Lanthanides, .07% ground water and perma-ice, and trace compounds.

The biology of the story
Or does it make sense?

The evolution I currently have starts with proteins boding into DNA/RNA slop and then single cell organisms in lakes and rivers, where geothermal activity creates temperatures as high 120+ Deg C (in places). It eventually evolves into complex land based organisms.

Owing to the relative scarcity of energy (for metabolic purposes) on the planet, biodiversity is significantly lower than earth. Perhaps 100 plant and animal species, plus an additional 1,000 bacteria species compromise the entire biosphere about five billion years after life first emerges. Cold climate adaptions can be assumed.

Intense competition for resources causes frequent evolutionary arms races and extensions, leading to most extant species occupying a particular niche very well, and having either innate weaponry or symbiotic properties.

Under the circumstances, does that story work an a biological front?

Well you certainly make life there very hard to thrive. The geothermal vents under the ocean are likely the best places to have life spawn and grow and evolve. Geothermal vents would be the only places with enough consistent energy and random chemicals to encourage metabolic processes. After that it could slowly spread out to the farther reaches of the ocean. 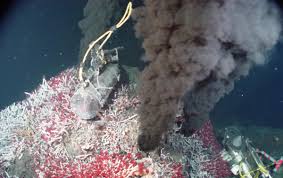 From wikipedia about biodiversity around geothermal vents.

Life has traditionally been seen as driven by energy from the sun, but deep-sea organisms have no access to sunlight, so they must depend on nutrients found in the dusty chemical deposits and hydrothermal fluids in which they live. Previously, benthic oceanographers assumed that vent organisms were dependent on marine snow, as deep-sea organisms are. This would leave them dependent on plant life and thus the sun. Some hydrothermal vent organisms do consume this "rain", but with only such a system, life forms would be very sparse. Compared to the surrounding sea floor, however, hydro-thermal vent zones have a density of organisms 10,000 to 100,000 times greater.

And for biodiversity here is another article about our vents. I'm pretty sure they are talking 300 hundred more advanced mulitcellular species, since I can't imagine that bacteria and algae aren't in the 1,000s if not 10,000s. These also happen to be species that I believe are only found at vents, not others that make their homes in more diverse locations.

Unique biodiversity More than 300 species have so far been identified in deep-sea hydrothermal vent ecosystems, of which over 95% are new to science. Many are restricted to a particular vent field, making each ecosystem unique. On average, a new vent species has been discovered every 10 days since vent ecosystems were first discovered in 1977.

And ancient too Amazingly, vent life has changed little over time. A whole new domain of life was discovered in vent ecosystems - Archaea, an ancient form of life most closely related to the first life on Earth.

You said nothing about a moon, which causes tides and it is believed that tides had a huge impact on life leaving the oceans. The tidal regions are places that are claimed by both the land and the sea, giving a great biome for intermediary lifeforms.

The long winters are going to be hard for animals to survive, at least on land. Oceans don't freeze solid, and the vents produce food and energy year around. The winters would likely cause most things to hibernate over the winter (day night cycle). This would likely mean things living on the land would be plants and lower life forms like insects.

With such a small amount of energy available (outside the vents) and long winters and no tidal action I would guess that the planet wouldn't be old enough to have 'vertebrate' level animals on land yet (if ever), maybe even only a few plants, such as lichen or moss and some insects having made it out of the ocean.

Also 1000 bacteria wouldn't be able to support the evolution of complex multi-cellular life forms even as simple as a bivalve. So I wouldn't try to put hard numbers on those, unless you just want a planet populated by a few different kinds of goo.

Here is another article about the diversity of insects and bacteria on the planet earth. It starts with insects and then does some extrapolation for bacteria but the numbers are very impressive.

The way you have the world set up, I would say yes. Bear in mind that I am an 'interested amateur', and haven't taken any biology since high school either, but I love reading about science, so all of this is based on my memory of what I've read, along with some google-foo.

Here's what leaped out at me from the details you gave:

Liquid water at the surface is primarily available from geothermal vents... spatially frequent and temporally consistent.

I'm assuming at least some of those vents are under water (nothing is going to stay frozen around a hot vent). There's where your life probably started; the combination of heat, and chemicals brough up by the vent, is a great setup for organisms that use chemosynthesis. There is at least one hypothesis making the rounds that life on Earth started at hydrothermal vents. Go take a look at Wikipedia's entry for hydrothermal vents, and be sure to read the sections on biological communities and on biological theories; your setup seems almost ideal for life (assuming that life could, in fact, originate in that type of environment).

I might argue about the biological diversity; thermal vents are tremendously diverse not just in terms of the number of different types of life at a particular vent, but in the variety of life at different vents.

Where you're likely to have much less diversity is the creatures that no longer live at the vents themselves; the less energy is available the fewer creatures and the fewer kinds of creatures you are likely to find, in my opinion (emphasis on opinion).

It might also be helpful to hit youtube and look for videos that show hydrothermal vents and the creatures that live there.

14
Does a planet's axial tilt and seasonal progression affect a planetary-ring system, as seen from the planet surface?
7
The (Alternative) Reason for the Seasons: Highly Eccentric Orbit
2
What rough climate and/or biome classifications would I assign to a planet with 31.1 degrees axial tilt?
6
In what ways would the earth's orbit/atmosphere/ocean currents have to be different in order to create summer with long nights?
4
How to determine surface temperatures at specific points
2
Life in the Temperate Zone of an Alternate Earth with an Axial Tilt of 42 Degrees--What Would the Seasons Be?
3
Is this fictional habitable exoplanet of Alpha Centauri A realistic?
3
Is This Desert Planet Realistic?
12
Plausibility check : a planet with tropical poles
10
Reality check: Can Polar CO2 lakes coexist with an equatorial H2O ocean?