How feasible and capable is a preindustrial land yacht?

This question is based in the desert world described in this question: Can my civilization be totally isolated by deserts?

A pre industrial society is adjacent to deserts and mountains to the East and West and a drying sea to the South. On the opposite shore of the sea is a vast salt flat area many hundreds of miles across. There are no oasis on the salt flat and it is very hot. It has never been crossed before even by camel train as the distance involved is too great. At some point a brave soul comes up with the idea of using some form of giant land yacht to attempt to cross the salt flat.

How plausible would such an undertaking be and roughly how far might such a yacht voyage into the salt flat?

Restrictions and assumptions This is a preindustrial society with no steam power. The planet can be thought of as a very dry Earth. The wind strength can be adjusted within Earthly bounds you may assume anything between a gentle breeze and a moderate gale is blowing and that the wind has a prevailing direction into the salt flat.

Pertinent considerations when answering (not a comprehensive list!): The weight that can be carried, the amount of water, the size, mass and resistance of the wheels, the size of the sail, the crew, the ability to turn and return to base, the stability of the vessel in high winds.

The Chinese claim to have built the first wind-driven carriages back in 552–554 AD as people transport for about 30 people in the 金楼子 (Book of the Golden Hall Master). Apparently, one was used as entertainment for the emperor. Around 610 this one appeared in the Chinese Manuscript "The Continuation of the world" (续世说): 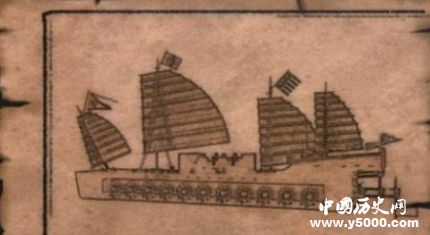 Apparently, some were still in use some 1000 years later when they appeared on maps the Europeans made, such as this 1583 one: 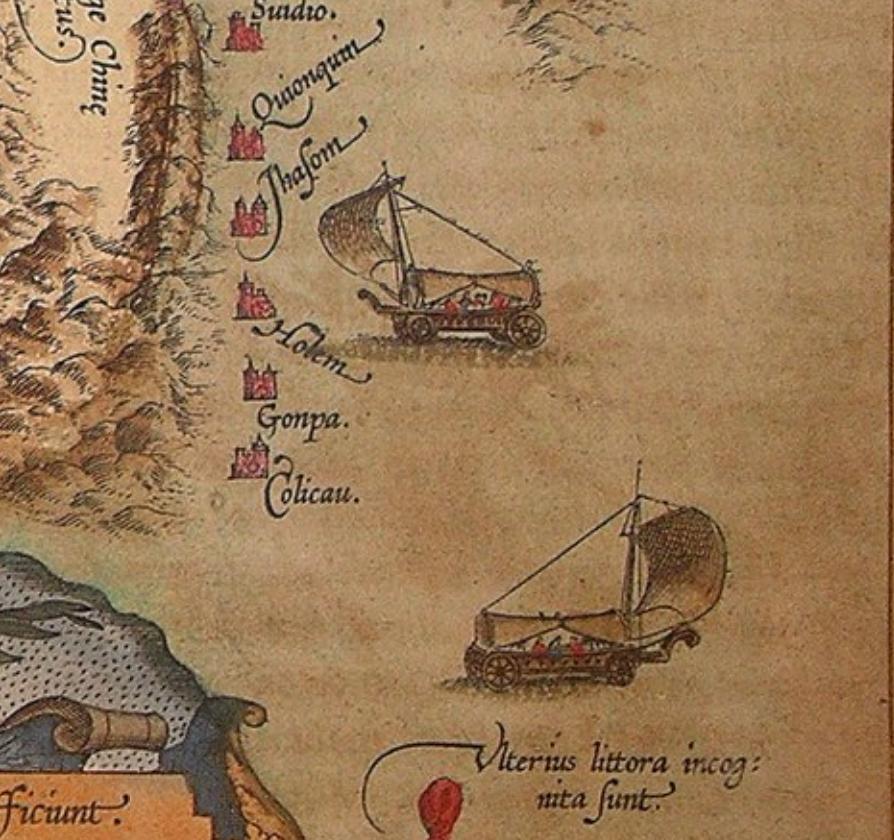 The first of these sources claims that it travels what accounts to several hundred kilometers per day for these large transports. But then again, Chinese manuscripts also do contain pictures such as sail-assisted carts and even in modern times, there was the "Chinese Wheelbarrow" - a sail on a single wheel with cargo strapped to it. This device was used en masse in 1797 when it was described by Andreas Everardus van Braam Houckgeest and still saw wide use in 1965 when Joseph Needham described it. 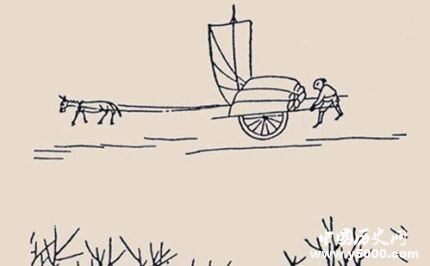 However, you need to think differently: the thing is not a moving city, it is a flat cart with large wheels. The flatter the thing is on the surface, the better.

When the Americans went west, some in Kansas used comparably small Wind wagons. About 350 pounds heavy, these carts would manage 15 to 40 mph, and the track Kansas City - Denver (600 miles as the crow flies) in 20 days, for an average of an effective 30 miles per day. This seems to include weak or not too favorable wind, a somewhat uneven terrain (the prairie is anything but perfectly flat) and not knowing the target direction perfectly.

So if you know the direction and have no obstacles, got a steady 40 mph out of the vehicle, and manage that for 8 hours, the absolute top reach per day for such a scouting cart could be about 320 miles.

However, as you go heavier, you also induce more drag. If we assume the Chinese 30-men cart from the map above as the basic setup, I estimate that larger landships could manage about 20 mph tops, but with a crew possibly could drive for the whole time there is light, so about the same total reach with the same wind. Assuming similar loads to mid sized Kraier (15-100 loads or cargo) or a large Schnigge (which had some 40 rowers and tops 90 people), we'd aim at 20 to 50 loads of cargo and a crew of 22, or 40 to 100 tons of total carried weight.

Instead of a single large ship, it'd be best to use an armada of smaller and medium vessels: using a few of the small and fast types to scout the way, while the larger ones do drive in a wide cordon to try to not get into each other's dust trail. This allows to re-shuffle the cargo as the supplies get drained over time and in case of vessels damaged in accidents. It also prevents getting totally stranded in case one vessel becomes inoperable.

Giant land yachts would be inefficient for such a society (and potentially impossible to build reliably). Single or double person lightweight vehicles intended for rapid short bursts in moderate wind conditions would be better.

Rather than building a giant vehicle (expensive and a huge loss if anything goes wrong) you build the small vessels. Easy to build and replace, better to maintain and entirely expendable if the unfortunate driver screws up and thoughtlessly dies — there's plenty more where they came from. Losing an entire large ship might make getting replacement ships too expensive and creates a bad image and might deter the idiots you need to drive them.

Assume minimal stability unless this culture has built up a long experience of building such craft (and they might, just for e.g. sporting events locally). Your biggest problem is likely strong components for axles, wheels and bearings (or sled skis if you go that route).

You are unlikely to try and venture the whole distance in one go. Instead you would create staging posts which you drop off supplies at for the final push. If at all possible you will try and find something that grows or lives out there that you can exploit and supplement supplies with. But you will definitely do it in stages, so that you can minimize risk at each point. You would also need to build experience with judging weather and wind conditions as well as the condition of terrain — it may look flat, but that doesn't mean there aren't hollows and soft parts.

Navigation could be a real problem. Wind-driven craft do not always have precise control over direction. This is another reason to build staging posts which can act as easier points to navigate and refer to. You would ideally want to build reasonably tall structures with something prominent at the top easily visible. In many ways your ability to see and navigate will be limited by the horizon and ideally your culture would need to develop some form of telescope or optical aid for your intrepid (crazy) explorers.

One partial solution to the problem caused by center of gravity having to be above ground: Use a Kite rather than a Sail-on-a-mast.

The kite's anchor rope can be in the middle of your vehicle, and very very low to the ground. This allows a strong pull with virtually zero tipping torque.

It also allows access to the less turbulent and stronger winds above the surface.

Not practical, unless the terrain is flat like Salt flats in Utah.

A preindustrial land yacht can roll out fine until it stops, and it has to be pushed again. Two factors - Stiction and lack of ball bearings are going to doom the land yachts. They sure can work fine as a proof of concept, but then from time to time its passengers would need to disembark and give it a good push. If we have more cargo than passengers, the yacht at some point would be stuck for good.

Sand deserts would levy enormous amount of stiction (have you ever pulled a cart on the beach?) Rocky deserts are more favorable, if the land it flat enough. And of course salt flats would be ideal.

Not the answer you're looking for? Browse other questions tagged science-based reality-check technology environment vehicles .

3
Can my civilization be totally isolated by deserts?
5
Living on a Windy Rainless Hemisphere

22
How much land area do my land-based animals (herbivores) need for food?
9
Space wizards city : Is it sustainable?
1
Post apocalyptic science based story
21
Land coral and filter feeding
1
How to maneuver and land a Zeppelin without engines
1
Creating a Hard and Feasible Molecular Disrupting Beam
4
How feasible would non-jawed vertebrates be on land?
4
How best to control the cost of iron and what it’s used for in my world?