How to maneuver and land a Zeppelin without engines

So my world is a fantasy setting (I wouldn't call it high fantasy) where a few hundred years ago a great empire invaded an island the size of Syracuse (due to overly aggressive flying natives attacking ships that sail a bit to close). When they first invaded the island they actually did quite well for wingless creatures, (the natives could only glide) but as they went farther inland the coastal mountains got higher and the advantage of gliding became ever more clear, their armies would always get destroyed before they reached the tallest ridge, to be able to get past the apparent wall the emperor declared a reward for someone who could come up with a form of airship to bombard stuff at and beyond the coastal range.

Of course somebody came up with the idea of a hydrogen filled Zeppelin, but without engines. Any form of engine would wait over a hundred years to be invented. My question is how would you land a Zeppelin (without deflating) and what would you use, instead of engines, to maneuver it? Also the culture doesn't have a good enough understanding of magic to use it for this problem.

A zeppelin is floating like a boat is floating. Engineless boats can be propelled by sails or oars.

Single-oar sculling is the process of propelling a watercraft by moving a single, stern-mounted oar from side to side while changing the angle of the blade so as to generate forward thrust on both strokes... In single-oar sculling, the oar pivots on the boat's stern, and the inboard end is pushed to one side with the blade turned so that it generates forward thrust; it is then twisted so that when pulled back on the return stroke, the blade also produces forward thrust. Backward thrust can also be generated by twisting the oar in the other direction and rowing. Steering, as in moving coxless sculling shells in crew, is accomplished by directing the thrust.

The pictures I found do not do it justice. My favorite sculling is the little tub-boat Lin is in in the movie Spirited Away.

As regards landing, you would land the inflated zeppelin in the same way people moor barges and boats. Someone jumps off to the land, attaches a line and then the crew use the line to pull the boat in.

For your zeppelin a crewman would be lowered on an anchor. He would make the anchor fast to something sturdy on the ground (or perhaps the anchor is a screw and he screws it into the ground) then the crewmen still aboard the airship use the anchor line to pull themselves down to the ground - either with manpower or with a winch.

I take it the anchor thing is self explanatory. Here is more on single oar sculling. 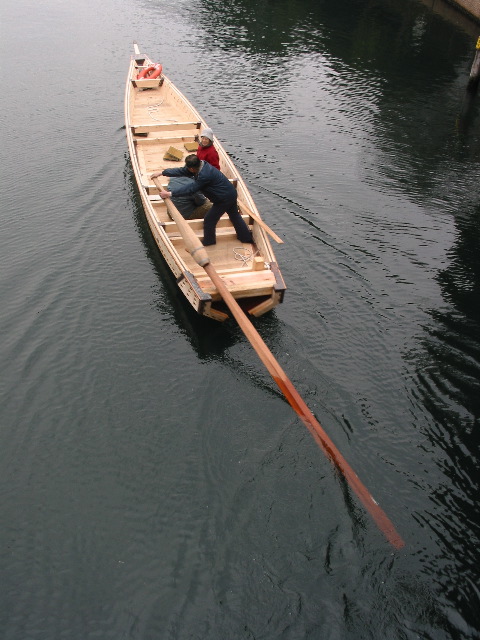 The single oar is swept back and forth. You can use a regular oar this way (for example your other oar breaks). Some boats have a mooring point in the back of the boat to allow this. The pictured boat has a long oar purposefully for sculling.

The sculling oar is pushed back and forth. It is turned as it moves from side to side, so a component of the motion is forward in both ways. 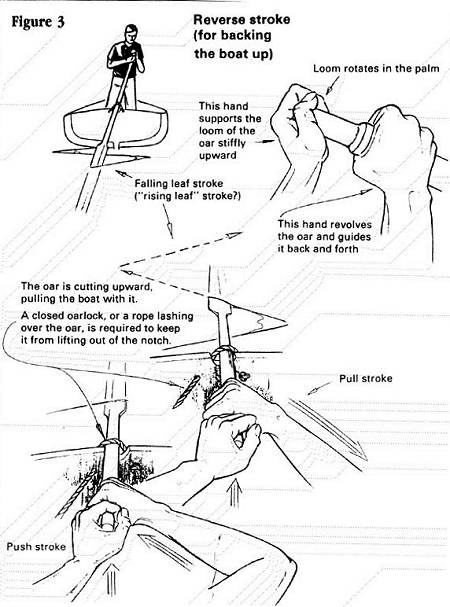 If it is still not making sense watch some youtube videos.

So your single oar sculling airship: it would have a giant fanlike sculling air-oar off the back. This would be pulled back and forth - maybe by a team of slaves or maybe by draft animals in the ship working a wheel with mechanisms to translate rotary into lateral motion.

Alternatively you could have a row of individual air-oars set up like a Roman galley, but the oar stroke would be flat against the wind on the backstroke and then blade forward (to minimize air resistance) on the return stroke.

Of course the fans would be painted with patterns specific to the allegiance of the ship, or maybe with a decoration particular to that ship.

There were Chinese man-powered paddle wheel boats and ships for hundreds of years before steam engines were invented.

So theoretically someone could invent a man powered propeller for airships before steam or internal combustion engines are invented.

There's a simpler answer depending how often you need to pivot. If you only need to pivot when landing, positioning the air release valves on the sides of the inflatable would act like the oar example without the necessity of wind in your favor. Just release the left valve when going right and the left when going left. It's not going to be super-fast, but if you're landing, that's not likely a major concern.

Not the answer you're looking for? Browse other questions tagged science-based technology magic warfare or ask your own question.

36
How could a sail powered airship work?

26
How to Breathe Both on Land and Under the SEA
26
How to make the development and use of Steam Engines preferred over that of Combustion Engines?
11
Mermaid Land (and Sea?) Combat
4
Underwater communication on land and beyond
7
How to build the largest possible zeppelin with ancient tech?
7
Technology to produce food without land, what will happen with the land next?
2
Land power and science fiction militaries
2
Can you make cheap steel without steam engines?