I had posted a question recently for my world building project concerning fungal lifeforms in place of traditional plants in a certain region of a tidally locked world. Had really good and informative responses. Now I would like to pose another question about this setting.

To the east of the main continent is an ocean frequented by powerful storms. On the eastern edge of the continent is a large group of islands running north/south and acting as a buffer of sorts.

I had an idea for these islands to have, instead of plants, land adapted coral life forms of different shapes/sizes, ranging from large structures to clusters of polyp grass. My idea was to have these islands heavily shrouded in mists which provided aeroplankton for the coral to feed on, along with matter being carried in by storms. Seems like a bit of a stretch though I am open to any explanations that could work.

Okay, air plants are good, but let's go in a slightly different direction. Let's go a little more ... macro. Instead of microscopic coral creatures, let's get bigger guys, who are sort of a cross between this: 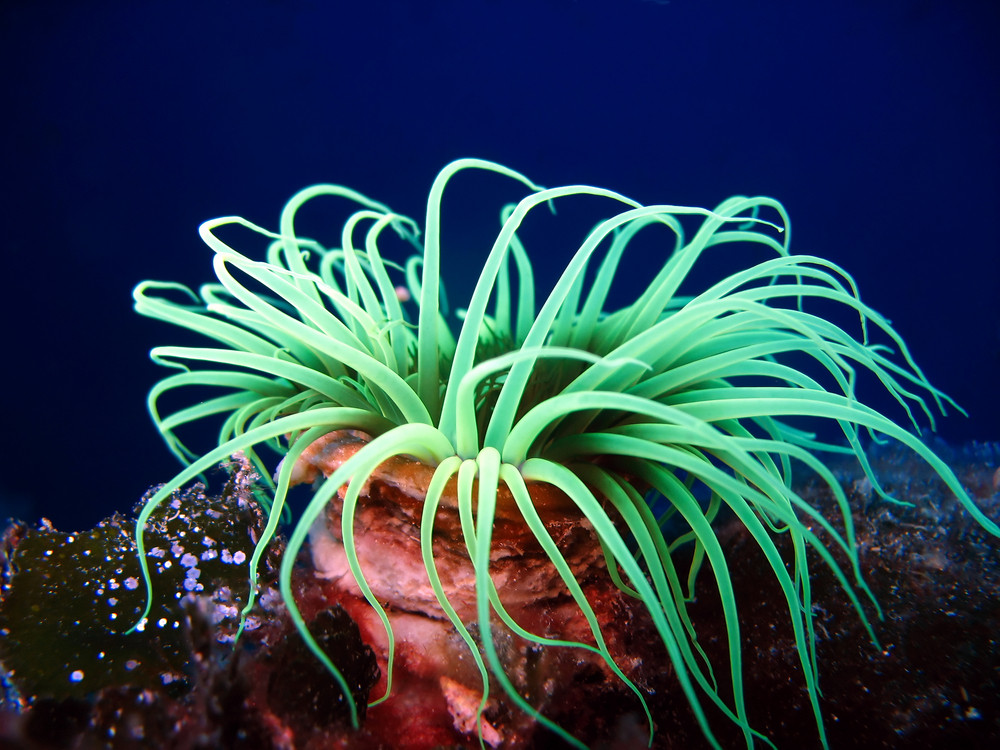 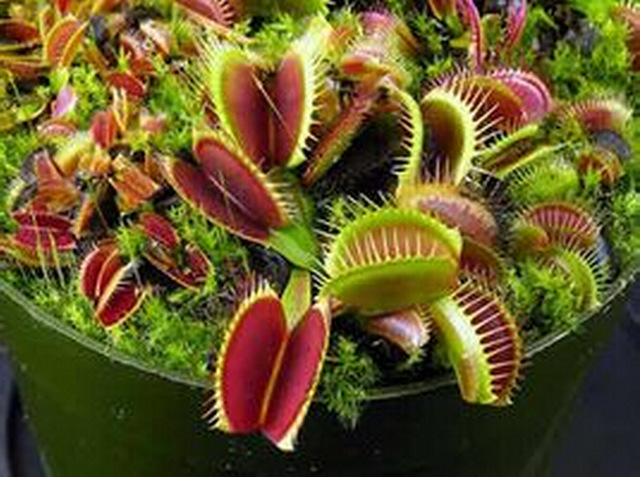 To get cool coral reef-building behavior, all you need is for them to grow in weird funky shells that persist after the animal dies, and, of course, aeroplankton. Which on this slightly macro-ier scale we're working with now, is quite possible. Look at this mosquito swarm in the Arctic: 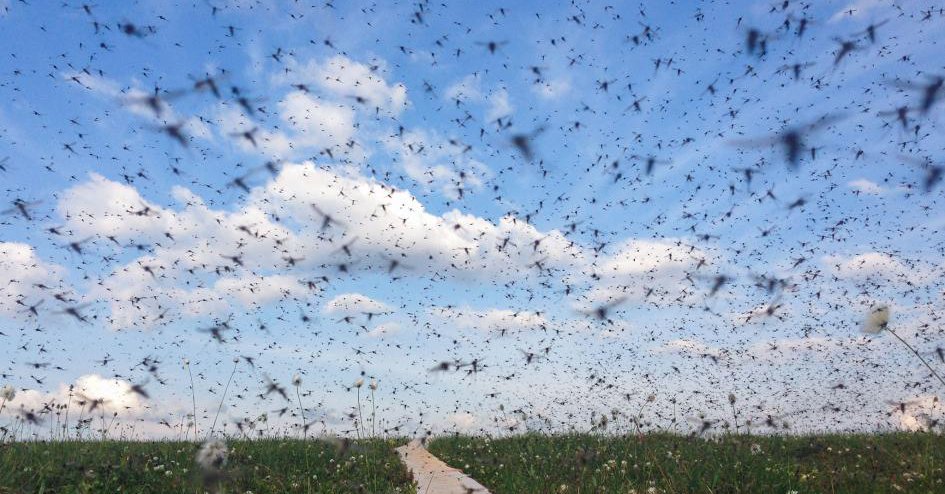 Don't even get me started on the Everglades...

So I think we're pretty good. Just make sure your food creatures contain enough mineral content -- perhaps exotic chitin -- to build the coral shells, and you can have huge land-coral formations.

Update: another quick thought on aeroplankton... a nice source of this could be spores from fungi or offshore algal mats, or pollen from gymnosperm-style plants (like conifers).

I think the biggest problem will be not with the coral-like (coralline?) life forms on the land, but rather with your "aeroplankton". One of the defining characteristics for plankton is that they're neutrally buoyant in the water, and it's really hard to be buoyant in air. Interestingly, making the air moist actually reduces its density- water vapor is lighter than the nitrogen and oxygen gas that makes up most of the atmosphere, so when it displaces those molecules the parcel of air gets less dense- problematic because we're trying to make things float in it. I can't think of a way that biology would make this buoyancy happen, and I can't think of a reason evolution would select for it; there's not a lot of nutrients in the air, and it wouldn't keep you safe from predators.

However, if you're happy to explain away the aeroplankton, then I can't think of a reason that the land corals couldn't exist. You've resolved their biggest problem, desiccation, with the mists. They'd have to be euryhaline (able to tolerate a wide range of salinities), because the water splashed on them from the ocean would be salty and the water in the mists and storms would be fresh. They'd still be able to form symbiotic relationships, either with the new photosynthetic aeroplankton or the classic marine phytoplankton.

So, why don't we have land corals? I think they just aren't very fit organisms for land, where food doesn't usually come swimming to you like you have in the ocean, so they might be outcompeted by some kind of non-sessile version. More importantly, our air isn't nearly damp enough to provide life support. Corals are constantly exchanging compounds with the environment, and that includes bringing food as well as taking waste and reproduction away. The mists on our planet aren't dense enough to carry those, and it'll be a challenge to make that happen with fog.

tl;dr: Buoyant aeroplankton are hard to make, but if you're okay with that then land corals are certainly possible. Their biggest problem would be the harsh environment, not finding food.

Absolutely possible for this to be realistic. There are a whole class of plants called Epiphytes

These basically live on food and water they get from the air. Kind of like what you describe. In the way you describe them, they will get a constant fairly significant source of nourishment - so should develop fairly well. You could even postulate a plant that "fixes" some mineral from airborne particles, creating a hard structure like coral.

One of the best decorative examples of the Epiphyte family is the Staghorn Fern I have a colony of these in my garden, they LOVE banana peels!

To be honest - you don't neccesarily need to go with a Coral Epiphyte - you could go with trees where the seeds are brought to the islands by water currents. A great example of how this can happen is Coconuts - I will always remember an ocean trip I took as a child - where days from land I watched a coconut bob by - it had germinated and was growing a little shoot of a coconut tree in the Ocean current, much like this: 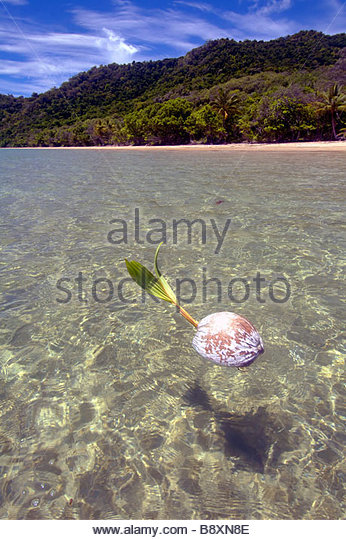 Possible, but read below.

I've googled "Air Plant" from Tim's comments, and found many interesting articles. One of them is this Reddit post explaining how they can get nutrients.

Air plants absorb almost everything from the moisture in the air.
Here in Hawaii we have LOTS of air plants. Orchids, pineapples, etc. These will grow by just plopping them on the ground or tying them to a tree (pineapples are a bit too big to tie to a tree, but it works great for Orchids).
The moisture in the air, as well as rainfall, give these plants what they need. It is pretty amazing to think that a huge pineapple can grow on 'air'. I've many pineapples in my backyard which is all lava rock - to grow a new pineapple I simply remove the head of an existing one, trim off the meat, and set it on a rock. 2 years later, pineapples.
I should point out that air plants can only do well in tropical rain forests. Where I live we get upwards to 200 inches of rain a year. So we have near constant high humidity and lots and lots of moisture.
Also, air plants tend to have very long roots that dangle from the plant (not into the ground, just hanging in the air or 'attaching' themselves to rock or trees) - these are what absorb most of the nutrients.

With your setting, you have plenty of dirt carried by the storm and moisture by the mist. Go ahead.

The problem with your setting if you're going with coral animal, not plant, is animal usually eats plankton, and does not feed on materials exclusively.

You must make sure the aeroplankton will thrive, else your corals will starve. As of how, it must be in different question.

Feeding on materials directly from the air (from the dust) seems a bit hard, since water coral does it directly using cell membranes. Your land coral should have sort of skin that limit water evaporation, that makes direct absorption using skin difficult.

It depends on how set you are on the hard body "Coral" part of the concept, feeding isn't that hard, there are a number of mechanisms that will serve you well, you can have air rooted species, carnivorous feeding habits or some kind of wind filtering lichen. But all the plants that currently use those strategies are 1. plants, 2. pretty organic and squishy, they're not supported by inorganic exoskeletons, nor would it be easy for them to source enough material to built such structures.

Since you've given a coastal environment as the benchmark location I propose an actual plant rather than an animal type coral polyp, this plant would source its food from both the air and from seawater as a filter feeder web and its water from the ocean. Seawater will put the plant under extreme pressure from osmotic processes; as a coping mechanism it will deposit a lot of mineral material in/on its bark and form a stony, inorganic casement that will protect it from waves washing over the island during large storms. This is basically a wispy feathery leaved tree with branches and trunk wrapped in concrete that picks up food and some water from the air and more nutrients and most of its fluids from the sea. The limbs and leaves could be mobile like those of a Venus Flytrap or even with a polyp's waving motion, the same is true of its roots. These trees could live in shallow water and build islands and reefs in favourable areas.

Not the answer you're looking for? Browse other questions tagged environment worldbuilding-process or ask your own question.

12
Which conditions would make aerial filter feeding successful?
5
Feasibility of the coral highlands

5
When building a world, what are the advantages and disadvantages of a top-down and a bottom-up approach respectively?
4
Life on a planet with no land near poles
22
How much land area do my land-based animals (herbivores) need for food?
76
How can I develop names for my fantasy land?
7
How to make a fantasy world immersive and believable without making it low fantasy?
20
Can massive military land vehicles be made practical?
2
Can you create a mini ocean or sea at a smaller scale in land which can hold marine life (0.55 square km-onward)
7
Technology to produce food without land, what will happen with the land next?
5
Feasibility of the coral highlands
1
Problems related to breathable liquid and deep sea diving