How useful would a giant centipede-like creature be as a mount?

I am in the "drawing board" stage of creating fantasy mounts for my world and I was wondering how useful would a giant centipede-like creature be as a mount ?

I am personally operating under the assumption that while the centipede-like body-plan would be quite slow and creepy looking, it could potentially make for a very stable and safe means of transportation, suitable to all types of terrain.

I envision a giant and very powerful mount capable of carrying multiple people or goods, kind of like a (much) slower version of the bus.

Also, though slightly unrelated to my question, what would be a good justification for the existence of such a creature, I assume that very harsh terrain might be a good enough excuse. 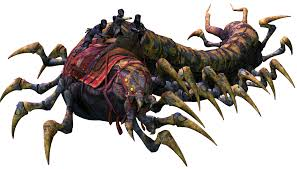 A centipede would make an awesome, fearsome fantasy mount!

This video does a pretty good, close up job of extolling the virtues of the common house centipede.

While all the pros have been well pointed out by @elemtilas answer, and most of the physics based ones can be hand waived by magic. I think there are a couple of cons worth considering just to add some flavour:

I think you picked a very cool mount, go for it!

Awesome idea, and others have answers for your main question.

(It does however immediately bring to mind the Worm Riders of Dune, though these are giant worms, not centipedes.)

But you also ask this:

Also, though slightly unrelated to my question, what would be a good justification for the existence of such a creature, I assume that very harsh terrain might be a good enough excuse.

You might want to read this wikipedia page on megafauna:

Analysis of the variation of maximum body size over the last 40 Ma suggests that decreasing temperature and increasing continental land area are associated with increasing maximum body size. The former correlation would be consistent with Bergmann's rule,[15] and might be related to the thermoregulatory advantage of large body mass in cool climates,[11] better ability of larger organisms to cope with seasonality in food supply,[15] or other factors;[15] the latter correlation could be explained in terms of range and resource limitations.[11] However, the two parameters are interrelated (due to sea level drops accompanying increased glaciation), making the driver of the trends in maximum size more difficult to identify.[11]

It's amazing how many over-sized versions of commonly known animals have existed at one point in earths history. For your world I would suggest you simply adapt some of the reasons given for the existence of real life megafauna, there's a lot written about this subject.

Well, first let's go with how it could appear: funny enough, a creature similar to what you wish, although much smaller, has already walked on our planet. Arthropleura is an extinct species of arthropod that could grow to lengths over 2 meters long. This giant myriapod most likely had an herbivorous diet, and it's ability to grow so large is assumed to be related to the high oxygen concentration in the air and the high humidity of its habitat, which prevented it from dehydrating, as well as a lack of predators, evidenced by its relatively thin exoskeleton.

Now, we need to create the suitable conditions for a creature like arthropleura, but bigger and preferably faster. First things first: oxygen. The problems regarding giant arthropods in this site might be second only to the ones regarding the existence of dragons. Their trachea severely limit their ability to obtain enough oxygen at large sizes, their body plan isn't suitable for carrying large weights, their exoskeletons become too heavy, and many others. By this we can already see some issues with our giant centipede coming to life as just an enlarged centipede. First things first, this thing will need a fuel source, preferably one that doesn't need to be at concentrations that could kill everything else. In here magic/mana might be a good substitute, as its usually high concentrations in the environment could likely be used to fuel the creature's body in place of only oxygen (something that is usually used to explain why we have enormous creatures that seem as active as a cat when you want to sleep: mana is being used in addition to oxygen to fuel their bodies, leaving heat as the main issue that's usually ignored). Changing the respiratory system to be something closer to lungs (as well as solving their problems regarding susceptibility to dehydration) also seems like a better strategy.

Second, the body plan: we'll need to alter its body a bit so that unlike a giant arthropod, this thing can survive growing up to large sizes. At this point, something of a hybrid between an arthropod and a vertebrate seems like the best option, and this question's answer seems to agree with me in a way. Rather than a straight up arthropod, your creature could be the world's strangest ""vertebrate"", working with a sort of endoskeleton to allow better weight bearing capacity, as well as an exoskeleton as seen in echinoderms, which will grow with the animal and eradicate the issues related with the risky molting processes, which can fail and leaves the animal temporarily defenseless. The legs too would likely be slightly angled In order to go predominantly under the body, as to better support weight (however with many legs and an endoskeleton, I think we can still have legs that come somewhat out of the sides of the body). Changing the exoskeleton structure might also be a good strategy, maybe using keratin instead of chitin.

Lastly, the environment: putting apart how unlikely it would be for all of those changes to evolve naturally on an arthropod from earth, your centipede creature will need an environment with little competition, if you want it to be carnivorous, or little problems regarding predators, if you want it to be herbivorous (/lame). In either case, the pressures will likely be similar to what we saw with dinosaurs: prey grows bigger, predators either group up or become bigger too (by become I mean the trait is selected, not that they try very hard to grow like Lammark would likely say), so either your centipede creature saw the need to grow to avoid predation, or it's usual prey started growing up, leaving it to follow the same path. Another approach to the carnivorous growth could be something like we saw with birds and pterosaurs, in which a new predator appeared and outcompeted it with its usual prey, selecting the larger centipedes which could hunt larger prey. Either way, we ended up with 2 potential scenarios:

1- an environment in which the centipedes grew to massive sizes, and much like some of our world's sauropods, they lack predators capable of hunting them once they reach adulthood (this creature is closer to modern millipedes in behavior).

2- an environment in which few creatures are safe, as the giant centipede, with its multiple powerful limbs capable of effortless pursuit through harsh terrain, as well as some tree climbing capabilities due to its sheer size and strength can hunt most of the creatures in its environment, using its modified forcipules and powerful venom to quickly dispatch prey. Thank to its various adaptations that allowed it to grow to large sizes without making it into a slow giant, it was able to become a top nocturnal predator in its environment, usually hunting alone and being relatively aggressive towards other members of its species (this creature is likely closer to the scolopendra genus of centipedes in terms of behavior and overall hunting).

In scenario 1, you'll likely have a mount that is rather slow, as it didn't need to outrun any predators due to its size. It will likely be as docile as a modern millipede and it's herbivorous diet shouldn't pose problems and it shouldn't be a problem regarding transportation and carrying goods.

In scenario 2, you'll have a mount that works as a natural bandit repellent. It will likely be a naturally agressive mount (more than a lion resting in the sun but likely not as hateful as a scolopendra chasing you). It's diet will be a bit of a problem, since it will require a good amount of meat to be kept in a calmer state (scolopendra already prey on mammals so likely you won't need to feed giant bugs to your centipede). The use of a special muzzle will likely be advised, as well as dealing with the antennae (centipedes rely a lot on smelling to find prey, rather than eyesight, an I'm assuming your centipede has s similar strategy). It will most likely be strong enough to transport people and goods without issues and at a faster pace than its herbivorous counterpart, with its aggression, diet and nocturnal nature likely being your main issues, which could be slightly solved by selective breeding centipedes which are more docile and active during daytime (you likely don't want to trap 3 of these in a barn at night without restraining them until you've successfully selected these traits, or you might wake up to find only 1 left).

So summing up a centipede mount will likely be very useful, with its ability to cross various terrain at decently fast speeds, as well as how some species of centipede can climb structures, speed may vary depending on whether the animal was selected just to be big or fast as well, and their overall behavior and levels of aggression will most likely depend on their diet and lifestyle.

This is fantasy, so lets go with (mainly) advantages.

A centipede, or other long multilegged creature, would be quite useful at transporting many people or lots of goods at once, as they would effectively be a camel train with a single body and head. They could also be easy to lead and direct, as their antennae, if they were made less flexible, could be pulled on to simulate an obstacle, making them turn

Not the answer you're looking for? Browse other questions tagged magic creature-design transportation .

23
What could centipedal mechs do that tracked & wheeled vehicles couldn't do?
26
Maximum size of an exoskeletal creature