How would a giant marine snake-like creature survive?

I'm trying to think about the anatomy of a snake-like creature that would be maybe 2 or 3 times as long as a blue whale. I would also like for it to be able to lift its head and neck above the water. How can I not have its bones break from the pressure? And how would I solve the problem for blood flow? Basically how would it survive?

You'll want to look at the sub-family of Hydrophaniiae and the biological changes made in order for a snake to be underwater. Most of these are highly venomous, with paddle-like tails, and surprisingly, they still breathe air. What they don't have is extreme size.

Snakes are reptiles. You'll notice that reptiles generally get big in places that don't get really cold, and they stay small in places that do. Water causes heat loss, so they would have to stick to fairly shallow water which was pretty well heated. Snakes of great size in water? Past 10 feet? It doesn't work because of their inability to retain heat. UNLESS--you wanted something that just looked like a snake, but wasn't actually the real deal. So maybe not a reptile--something closer to an eel.

The size you want is extreme. Nothing in the fossil records regarding this comes close. On land, the longest snakes, even in fossil records, go about 40-50 feet, and right now nothing on earth that's a snake is that long. A blue whale is like, what 80 feet? So you're talking about 250 feet, give or take for your monster. That's 5 times the largest snake on record.

Again, maybe you want to modify something else and make it snake-like, rather than sticking to the reptile model.

I would also like for it to be able to lift its head and neck above the water. How can I not have its bones break from the pressure?

If the thing breathes, it's going to have to do so anyway. Whales, for example, do come to the surface, and their bones don't break, so it would definitely be possible. I have a feeling though, when you say you want it lift its head and "neck" (snakes don't actually have a defined "neck" they seem to be all neck) above the water, that you may mean in some kind of attack posture. That would be more difficult logistically, although I do think you might want to look at videos on YouTube of snakes swimming on top of the water. They do hold their heads up a bit and their body is laid out just under the surface of the water.

As far as pressure is concerned, under the water, actual sea snakes, the smaller ones, have been known to dive as deep as 300 ft.

Here's an except from the wiki on them, and by golly this seems like 27 times scarier than one giant snake:

Sea snakes have been sighted in huge numbers. For example, in 1932, a steamer in the Strait of Malacca, off the coast of Malaysia, reported sighting "millions" of Astrotia stokesii, a relative of Pelamis; these reportedly formed a line of snakes 3 m (9.8 ft) wide and 100 km (62 mi) long.[27] The cause of this phenomenon is unknown, although it likely has to do with reproduction.2 They can sometimes be seen swimming in schools of several dozen, and many dead specimens have been found on beaches after typhoons.[7]

The size you're talking about though, it's just far too massive without getting magic and hand waving involved. as long as it's consistent in your world it should be possible, but as far as science is concerned, a 250 foot long water snake is just too long.

You can solve the heat problem by putting them near thermal vents, but they will be eating SO MUCH at that size that you really have to build a whole eco-system around it. A blue whale can eat up to 7,900 lbs in a day. I might use them as a baseline, because while they are shorter than your snakes, they are rounder. Your snakes are going to need a plentiful food source. Unlike a blue whale, they can't count on krill.

I would actually look at Killer Whales as your model for food intake per day, if you are going with NOT making them a reptile. You'll first have to determine how much your snakes weigh (precisely! and exactly how long they are). Killer Whales are about 25 feet or so, and they can weigh between 3-4 tons, (the largest come in at more like 32 feet, and 6 tons)

Let's take a quick look at Titanoboa, though. It's terrestrial, and was likely somewhere between 40-50 feet long. It could weigh more than a ton. That's 2,000 pounds.

That's about as much as a largest saltwater croc. If you want to keep them cold-blooded, you can build them like crocs.

Growth rates of crocodilians are rapid during the first few months of life and require feeding at least 6-7 times a week (Whitaker and Andrews 1998). Once individuals reach sub-adult size they only need to consume 8-10% of their body weight a week (Whitaker and Andrews 1998). However, size, body condition, species, age, sexual maturity, breeding condition, and season can all influence individual requirements. SOURCE

Do look into the environment of this giant snake. It was warmer--there were lots of other giant things to snack on.

There were some enormous reptiles in the seas in their time. Not snakes that we know of, but certainly reptiles approaching the mass of your snakes. There are several problems your snake faces, but they don't seem impossible.

Cold The best way to solve this is by having a layer of fat between the body of the snake and the skin. Large mass is better for heat retention. So fairly chunky snakes would be best, not long skinny ones. If you want them to be able to spend at least some time on land then you wouldn't have your normal flattened sea snake (better for swimming), but a more rounded one and there are a few species like this. Add to this the ability to generate some heat from the internal organs like giant reptiles are thought to have and the cold problem is solved or even the ability to retain heat that Tuna today have. The constant swimming itself would generate some heat energy. But there's all sorts of ways the animal could get the heat and I see no reason it couldn't get all it needs from the sun.

Movement This is solved by having a flat tail like sea snakes today. I don't see a problem with your snake lifting it's head, so I won't discuss it.

Food They don't eat anywhere near the amount mammals need, because they don't have to fuel mammalian processes like generating heat internally. Large snakes may eat once a week or once in several weeks. Your mega snake might only eat once a month or once in several months. So as long as there is some sort of prey for them, they have plenty of time to catch it.

Bouyancy and breathing Sea snakes have huge lungs which extend throughout most of their bodies. In addition they can respire about 20% of their oxygen needs through their upper skin despite having scales. Sea snakes have different sorts of scales than land snakes anyway. They don't overlap because they don't need to.

All in all it should be possible to have snakes that size just by scaling up a sea snake with a bit of imagination, some artistic licence and something for it to eat.

Does it have to be a snake? Can it be a whale? I have been struck before by how elongated blue whales are. They are actually pretty slim. 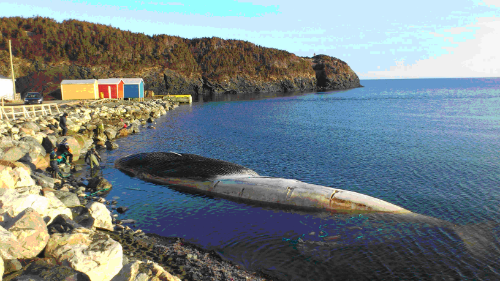 Also no self respecting snake would be a filter feeder. So keep the mass of the blue whale the same, stretch it out from 100 to 300 feet and decrease the diameter. You can have its big chin pouch still puff out when it feeds or if it is bloated and dying like this one.

Pressure is no more of an issue for this beast than for the whale. Lifting head out of the water would be easier than for a whale (many of which can lift their heads out of the water) because it would have more surface area than a whale and so more leverage.

51
Is there a maximum size an ocean bound creature could grow to?
6
How can I get a giant non-marine snake?

14
An enviroment where a bird-like creature can survive on passive feeding
5
How would a Dumbo-like creature filter noise?
3
How heavy would a Naga be?
8
How viable is a creature that floats through the air like a living hot air balloon
4
How would a creature like this work?
4
How can my reptile like creature spray blood from its eyes containing Capsaicin?
2
How would a “flaming collar” work in an animal and how could it be useful?
1
How and where would bird-wing fold away if they were mounted on internal turtle shoulders?
9
Is this creature's proportional head size feasible?
3
Why would this creature have a head?