How would a giant reptile creature hunt in a desert?

I'm talking about place similar to the Jordan desert, where the biggest prey is similar to wild donkeys and antelopes like oryx and gazelles. My creature is 1.92 meters tall and 4 meters long, looks like a monitor lizard but its limbs are located under its body and has a tail that doesn't touch the floor, making it more quick and agile. Being a large animal and living in a place without trees or dense vegetation, how would it ambush his prey? Would it be enough to put big rocks or another thing where it can hide? How would it be its camouflage? Would it hunt in packs? Or would it be better another hunt technique?

You are actually depicting Megalania - a gaint monitor lizards , varan. It's biggest (and deadliest) alive relative is Perentie - only 2 times smaller of what you need. Like any other of it's relative spices it was ambush predator. Megalania were living in desert and near it. There are some videos on youtube how varans hunting.

They do not actually need cover: they rely mostly on camouflage, tactics and, suprisely, speed. Yes, they can just chase their prey at a speed of a dog.

When they ambush, they slowly move toward their prey, preferaby from the back, from the low places. Prey in most cases do not run away even if it sees the lizard - varan is quite smart and uses special pattern of movement, so pray just thinks it passing by or laying in the sun (they learn and adjust it's behavior for each type of pray - to smart for a lizard).Then, when target is several meters apart - they quickly attack and bite legs using their sharp teeth and venom (yes they are smart fast poisonus lizard). This venom is not that deadly by itself, but it makes lizard's bite fatal even if prey gets away. So varan can just follow it and eat it when it drops.

So you don't need to invent what was already "invented in nature" - there were and and are gaint lizards with legs under body and tail above ground, leaving in the desert and hunting on any pray - from rats to cows.

P.S. I would never go to Australia wild lands. I am not that brave! 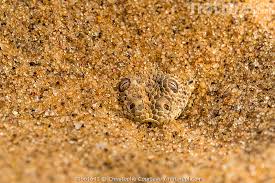 Your great lizards will wriggle down into sandy spots chosen for their proximity to game trails, salt licks, or other places prey will visit. Maybe they hurl some sand and dirt up atop themselves. When the time is right they burst out and capture the prey. That is what this sidewinder is doing and that is pretty much the strategy of crocodile and alligators.

Hiding out under the sand is also good because it is cooler in there. Also, if you take a leak no-one will know.

Probably the simplest possible answer you can think of. For this, your lizard will need a sensible advantage over its prey: better night vision (like lions), echolocation (like bats) or sense of smell (like copperhead).

The lizard can ambush (leopards) or actively pursue (wolfs) its prey, hunt alone or in packs. Pursuing behavior is a little bit harder to implement with a cold-blooded creature at night, but not impossible.

As far as I can tell, Arabian wolf is the only predator close to this size in Jordan. Wolves are mainly nocturnal predators.

If you want to create a scarier ambush predator then your lizard can take an example from spiders:

For the last two options, the lizard should be able to produce silk.

it could have very slow metabolism, meaning one catch could last long, and it should be able to hunt at night, plus, if it has super accurate thermal vision/echolocation/sense of smell/vibrations it would more likely be able to track prey succesfully, this dragon would not likely fly, for the energy consumption would be great, it could borrow itself into sand for a trap and give of a scent so animals come closer, then eat, also camouflage, could be actuall sand which is stuck by a mucose like substance that is sweated when they are prepared for the catch, the sand could help with temperature for the breath, which would probably not be fire but something poisonous, so if prey gets away, it wont be much longer till it dies

also: chlorophyl could be an alternative

P.S. I have a spanish keyboard setting, so it tries to correct words to spanish, so sorry if there are any misspelled words

Sidewinder-style ambush. Your lizards would bury themselves completely in the sand, only leaving out their eyes. When they see the prey, they burst out and eat it. That is what Mr. sidewinder and stargazer are doing. I highly recommend that your lizard be able to stun the prey with electric shocks. Also, I recommend that the lizard have a venomous bite, to kill the prey. The burying in sand strategy will protect your lizard from the heat and prevent anycreature from being suspicious.( MLP reference here.) This is how your lizard would hunt in the desert.

Not the answer you're looking for? Browse other questions tagged reality-check biology creature-design dragons deserts or ask your own question.

49
Why would an underwater creature remain lodged to its prey?
10
Would an anthropomorphic wolf species be able to hunt their prey without weapons?
9
The Science of the Marsupilami
2
A predator that uses an airborne chemical to make prey not be afraid of it
3
Is it possible for a reptile to be amphibious?
2
How Would a Merpanther Hunt?
4
How could this dragon-killing poison work?
6
What is the most effective location for spinnerets in a vertebrate?
2
Is loose skin with Cuttlefish properties possible?
7
Could my chameleon dragon exist?