Transportation in a fantasy world without wood

In my low-fantasy world wood is a very limited resource because all forests are haunted. Cutting a tree often means drawing the wrath of the creatures living in the woods, resulting in some very gruesome death. Exterminating the creatures in the woods is not even a possibility, because these places are ever-changing labyrinths and nobody who tried to enter them ever returned. So civilizations had to develop without relying on wood.

I already read many questions about similar settings and found a lot of interesting ideas. Using rock or clay for buildings, fortifications and furniture, animal blubber or dung for combustion, and so on. But there's one aspect I wasn't able to find any elaborate answer about: transportation. In our world for thousand of years wood was used to build carts and boats and other ways to transport people and goods. And if in my setting rock is such an important natural resource, I suppose there's the primary need to find an efficient way to move it.

I could just add to my world some giant turtles and say that people hunt them to use their shells as a material for carts, or stuff like that, but if possible I'd like to find some more grounded alternative. I suppose sea transportation is more or less impossible without wood, but about land transportation, is there some solid alternative that can be used? At a certain point of the timeline my plan is to make some societies reach a level of metal craft good enough to develop clockpunk technology, but before that how could they have transported for medium or long distances the natural resources they needed? 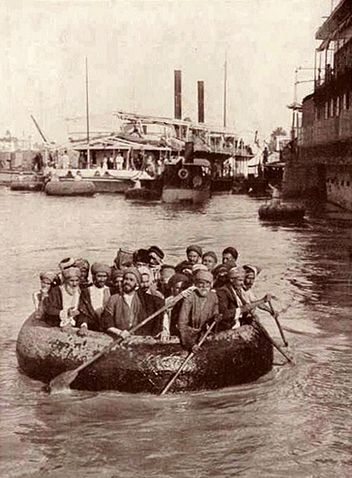 There were two major forms of construction used — hides stretched over a framework, as described by Herodotus, and woven bundles of reeds or basketry, waterproofed with bitumen. Boats of this sort were still used in modern times, being described by British ethnographer James Hornell in The Coracles of the Tigris and Euphrates (1938).[9]

Your people use bitumen aka asphalt to waterproof large, lightweight boats out of woven reeds and grasses. Smaller less labor intensive boats can be made by stretching a large hide over a frame. A bamboo frame would be ideal if you have bamboo. A whalebone or metal frame could work too.

Shout out to St Brendan, who sailed to America in a boat made of bull hide!

First of all people are always gonna have access to some wood. Steal a few seeds from a tree and you can start a tree farm. Birds and such can even do the work for you. There are birds (like the Blue jays) who are major distributors of trees because they often forget where they placed their nut stash, so instead of being eaten the nuts grow out into new trees.

If the creatures of the woods wanna prevent this from happening they have to come out of their woods.

So with that established do stuff like the incas to minimise wood usage; use pack animals, porters (carriers). That way you can even just use fiber baskets and such. We don't need carts, they're usefull, but humans can carry small goods, animals can carry slightly larger and heavier goods and for the really heavy stuff you've got rails or wooden logs (just look at how the Egyptians moved the blocks of the pyramids).

The Incas and Mayas had one of the greatest civilizations of the ancient world and they didn't use carts.

You can also use canoes and boats made of certain reeds like papyrus like the Egyptians did in the (early) bronze age. Egyptian ships

Also are haunted forests fireproof, because forest fires can be rather easy to start even from quite far away? A dry period combined with the wind blowing into the right direction and well...just look at California or Southern Europe to see how far flames can spread in a short time span and remember those fires were being actively fought using modern equipment.

People have been using fire for a long time to get rid off of unwanted wildgrowth. Slash-and-burn

Frame challenge - symbiosis rather than exploitation.

Trees die. And rot follows. Any sentient species will eventually learn that the public health is better if you dispose the dead individuals in a sanitary manner. What better way than to donate the wooden corpses to those monkey descendants who can do the work and take a benefit from it? Humans - the wood carrion species.

because these places are ever-changing labyrinths

In the course of ever-changing the labyrinth, they can arrange the "diffusion" of dead trees in areas with low concentration, i.e. where humans live.

same hat! I have a similar situation in one of my settings [: Here's some ideas that helped with mine, as well as some I came up with for yours!

Haunted as the woods may be, an orchard or tree grow well within city limits might be out of reach for the things haunting your woods. This also opens up the interesting possibility of a tree farm that got too big, resulting in a haunting that ultimately destroyed the city.

Sometimes, the way forward is through. The solution is not so ham-fisted as to exterminate the creatures in the forest nor to just give up on wood entirely, but to reach some kind of understanding with them. Some things must be taken. Not every tree can be ours-I mean, theirs. Maybe the people in your world only take two or three trees after extensive rituals and pandering to the things in the woods. A constant and slow cycle, ensuring that wood is used at the absolute bare minimum, and placed at a value alike to the most precious gems in the world. Our world's ships of solid wood would seem to them like one carved of marble and inlaid with silver and gold would to us.

In a world with international trade, it's not totally outside the realm of possibility! Maybe wood is grown in more arid places without any forests to speak of, like desert coasts and the like, and imported from there. Most of the transportation is done with solutions purchased from these places where the only forests are 100% certified beastie-free.

In an adverse to pandering to the creatures, maybe the people (or part of the people; these shouldn't be totally mutually exclusive) of your world are short for time and really, really not into the idea of pandering to weird scary things in the woods just to get like two trees. They utilize things that repulse the haints of the forest, possibly ranging from magic to materials to even sounds, smells, or other sensory details that keep them at bay. By the time it's over, the people are long gone, and so are several of their precious trees.

Maybe it's more a debt than an immediate response, and this could tie into the cooperation answer listed previously. They cut down one tree, but they plant many times more than that, enough to placate the things out in the wilds enough that they can part ways with their one tree, since they now have so many new ones.

Hope these ideas help! It's funny to see a question with a similar situation as mine; maybe my Lešovyk and your forest creatures can bond over their mutual love for forests and irritation over people constantly trying to defile their beloved woodland homes ^^

Stone carts. Eh. You could probably get away with it with a little fantasy hand-waving.

Sliding stones only on ice.

Not the answer you're looking for? Browse other questions tagged technological-development transportation natural-resources low-fantasy .

41
Could a technological society develop without wood?
9
Fantasy/Medieval setting - materials to build when wood and stone aren't an option?
4
Technological development without metal/wood/magic
7
Gaining The Engorgement Enchantment For Peasants
5
Bootstrapping first metals and electricity without help of "easy" fire
2
Freight on a World without Oceans