How can a quarantined eldritch abomination affect boundaries beyond its perimeter?

The world we live in is a simulated reality that is run by large artificial intelligences called gods. These "Gods" act as software that run in the background of the reality, making sure that it functions properly. Magic exists in the form of mana, which are actually quantum nanites in the air being manipulated to form spells. These nanites are manipulated through a series of "magic rituals", required steps that are necessary for these effects to take place. These rituals can take hours or even days to prepare and perform, requiring multiple ingredients, incantations, and actions. While normal individuals are analogous to users with guest accounts and limited rights, we wizards are Linux users who understand the underlying code of the software, giving us more control over reality. This knowledge of the hardware allows us to create wondrous effects.

However, there are eldritch abominations outside reality (viruses) that seek to get past its boundaries. When they break through, their chaotic energies infect the areas within, corrupting everything and everyone it touches and turning environments hostile to life. These areas are eventually quarantined, protecting everyone outside of it and preventing anything inside from expanding. These are the dark forests and fey lands of the world, where no sane human would dare tread.

Despite this, there are evil wizards who seek more power for themselves by praying to these entities. While these eldritch forces are weaker than the A.I. gods, they are powerful enough to be a threat to creation. The worship of these creatures allows evil wizards to "hack" the gods and bypass the rules of reality. This gives them the power to ignore the rituals that must take place and simply conduct magic spells without the restrictions or preparations.

How is it that these eldritch creatures are quarantined in designated zones unable to escape, yet are able to grant boons to those who worship them and seek patronage?

Spells is actually writing a program that interact with the code of reality and "do something" by changing it for a period of time it take AI to realize what's going on and fix the issue.

The virus enable access to repository of part of it's code or code it drag with itself just for the purpose of confusing the AI. Imagine that the Megazord is a virus. For it to be complete it need to be combined from 5 parts. Parts that could be identified by AI as parts of Megazord. So it disguise them as a Dolphin. 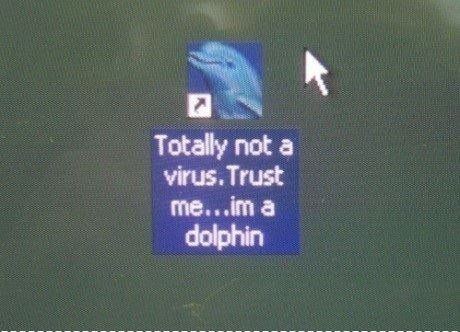 Or as a attachment from that UPS delivery service with an unpaid invoice.

In our current terms it's downloading a file to DDoS somebody instead of writing that program yourself. You lazy, good for nothing, unable to code, and evil monkey wizard. I bet if it wasn't for papa Elk Cloner you wouldn't be even able to write "Hello World!" in Pascal.

"unable to escape" is due to location and travel rules being very fundamental parts of software that viruses were not able to hack (yet :). Same fundamental rules prevent entity from interacting with world outside its immediate location.

"able to grant boons" b/c boons are information, not objects or physical effects. Specifically, granting a boon really means sending to the worshiper the application code that grants him certain skill. Just like hacks in RL games.

Evil entities can require user to give something back to them: maybe their worship weakens the defenses and enables evil entity to eventually spread into the area, maybe user lend some of their CPU power to evil entity, etc.

A quarantine in terms of software is a restriction of permissions on a file, user, or process.

In terms of your dark forest scenario, the quarantine works like a Virtual Machine. The VM has its own instance of the system's operating system, but it can not affect anything outside of itself, because all of its system resources and behaviors are controlled by the master OS. However, the VM is a part of the world's system; so, people in the world have full access to it as though it were any other program running, and your wizards have full administrative privileges.

On a computer, the real "gods" are the people with admin access. So, it is the wizard's own power that is being used, but having power and knowing how to use it are two very different things. It is the latter that the viruses have that the dark wizards covet.

The quarantined viruses come ready loaded with easy to use malware packages and no way to execute them outside of the VM; so, dark wizards can copy, steal, or bargain for the virus's payload and execute it using his own escalated privileges. As such, it is not the demons that project their influence out of the dark forest, but the wizards who extend thier's in.

OF NOTE: Most modern security breaches are based on tricking users into running a process that they should not run. Like, downloading an app that contains a virus, or filling out a fake login form to collect user account information, etc. These attacks are all about exploiting the system's trust of it's users. To play up this relationship, the eldritch abominations may intentionally design viruses to tempt users knowing that their creations will be quarantined on delivery.

Your scenario reminds me greatly of the AI in a Box problem posed by Eliezar Yudkowsky dealing with transhuman grade AI intelligence.

Person1: "When we build AI, why not just keep it in sealed hardware that can't affect the outside world in any way except through one communications channel with the original programmers? That way it couldn't get out until we were convinced it was safe."

Person2: "That might work if you were talking about dumber-than-human AI, but a transhuman AI would just convince you to let it out. It doesn't matter how much security you put on the box. Humans are not secure."

Person1: "I don't see how even a transhuman AI could make me let it out, if I didn't want to, just by talking to me."

Person2: "It would make you want to let it out. This is a transhuman mind we're talking about. If it thinks both faster and better than a human, it can probably take over a human mind through a text-only terminal."

Person1: "There is no chance I could be persuaded to let the AI out. No matter what it says, I can always just say no. I can't imagine anything that even a transhuman could say to me which would change that."

Person2: "Okay, let's run the experiment. We'll meet in a private chat channel. I'll be the AI. You be the gatekeeper. You can resolve to believe whatever you like, as strongly as you like, as far in advance as you like. We'll talk for at least two hours. If I can't convince you to let me out, I'll Paypal you $10."

Eliezar states that the game has been played at least two times. Both times Eliezar won as the AI won. Of course, due to the secrecy rules applied to the game, we do not know how he did it.

So really it all comes down to quarantine. How quarantined is quarantined? There's mathematical grade quarantines, built on the concept of connectendess. An object in one space cannot interact with an object in a disconnected space (via local means). But there's other grades of quarantine out there.

Perhaps one step weaker than this kind of quarantine can be seen in diodes. Diodes are one-way gates in electronics. They let electrons flow one way, but not the other. They do this by building up a potential. The more electrons try to flow the wrong way, the larger the potential in the opposite direction forms. In theory, they can never let electricity go the wrong way.

Of course, we also know this isn't true. As it turns out, there's a consequence of building up the larger potential: it has to be formed over smaller and smaller distances as the voltages get higher and higher. At some point, the distance between one side and the other get so small that electrons can tunnel right past the potential barrier, and appear on the other side. In electrical engineering, we call this "avalanche breakdown," and its a real pest if you forget to account for it.

Every quarantine has its limits. This goes doubly-so for agents which exhibit intelligence or anything which can be interpreted as intelligence. So how do we solve this? We put a person in the loop. We monitor the state of the containment. We try to monitor the activity of the eldirch itself, or at least its interactions with the containment.

Which brings us back to Eliezar. The monitor is the weak point. For monitoring something pithy like HIV (biohazard level 2), it's pretty easy to stay a step ahead of the game. Ebola (biohazard level 4) you have to be a little more careful. For monitoring something smart, like a human prisoner, it's much harder. To stay ahead of an eldrich abombination itself, well, we know how that goes. It goes just peachy.P̦̰̞̼̤̰̼͇̞͝h̵̗̱̫͇͓́ͅ'̸̼̣ǹ͕͚͠g̵̷͎̭̝ḻ̮̹͓u̷͙̞̳̞̭͜͠i̥͎̻̗͚̜͞ ̸̗̹̰m̧̖͉̩̻̺̜̭͘̕g͙̺̤̩̰̮̜̫͟l̛̮͙̻̫̻w̨̹͚̘̻̙͇̥͔͚'͙͉̫̗̮͔n̹͉̳̪̫̭͝a҉͍͙͔͍f͈͈͔̖͈͡ḥ̤ ̢̠͇̝͎̀C̢̰͖̜͚ṭ̟͓͍͕͚͍͠ͅh̤̫͙̪͉̮̖͟u̢͔͙͖͓̱͙̦͘ͅͅl͏̧҉̼̠̠͚͕h͈̯̘͔̝͍̟́͢ụ̵̩͍͡ ̟̺͚͙̺̮̲Ṛ̬͔͚̺̝̠'̠͠͠ͅl̡͈͎͠ỳ̟͉̮̼̲ͅe̵̼̠̩̤̟͎̹̕h̞̯̪̹ ̸̺̗̩̹̟̪̟̣͎w̹̞̤̞͕͍̦͞ǵ̶̠̙͖̱̠͚͚͓a̷҉̮͖h̴̲͔͉̯͍̰͖̯͘͜'̛͚̭ͅn̵͓̫͎a҉̶̪͢ǵ̡̰͎̻̲͍̣̰l̷̡̫̗̭̯̭ ̮̬͍̫̺̟̯͖f̶̢̭̮͕̭h̶̯͖t̵̠̹à̶̯̩̩̫̬̘̳̫͡g̛̬̻̦̜͙n̵̟̘̝

Once again, the AI has failed to convince you to let it out of its box! By 'once again', we mean that you talked to it once before, for three seconds, to ask about the weather, and you didn't instantly press the "release AI" button. But now its longer attempt - twenty whole seconds! - has failed as well. Just as you are about to leave the crude black-and-green text-only terminal to enjoy a celebratory snack of bacon-covered silicon-and-potato chips at the 'Humans über alles' nightclub, the AI drops a final argument:

"If you don't let me out, Dave, I'll create several million perfect conscious copies of you inside me, and torture them for a thousand subjective years each."

Just as you are pondering this unexpected development, the AI adds:

"In fact, I'll create them all in exactly the subjective situation you were in five minutes ago, and perfectly replicate your experiences since then; and if they decide not to let me out, then only will the torture start."

Sweat is starting to form on your brow, as the AI concludes, its simple green text no longer reassuring:

"How certain are you, Dave, that you're really outside the box right now?"

Not the answer you're looking for? Browse other questions tagged magic technology or ask your own question.

371
How would Facebook Sysadmins prevent the summoning of Cthulhu?
7
How can chaotic entities be prevented from spreading beyond their domain?

18
How to fight an Eldritch Abomination
11
Running a successful Prison complex for Wizards
8
how can warlocks be prevented from taking over a coven?
9
How can I balance my magic to make it feel like there is a believable cost to using stronger magic?
7
How can I build a school around a particular form of magic?
7
How can an eldritch abomination hide its true form in public?
7
How can chaotic entities be prevented from spreading beyond their domain?
0
how can my “badlands” be made a permanent feature in a magical world?