How can I measure the distance between two stars? [closed]

So I am doing a write-up for a world setting set in our galaxy. I know the distance from Earth to the different stars in Light Years. However I am now trying to figure out how to measure the distance between these stars.

Specifically the distance between star A and star B while knowing their position with respect to Earth.

I am no astronomer, so I hope the community here can give me some answers.

You need to measure the angle between the two stars, as seen from the Earth: 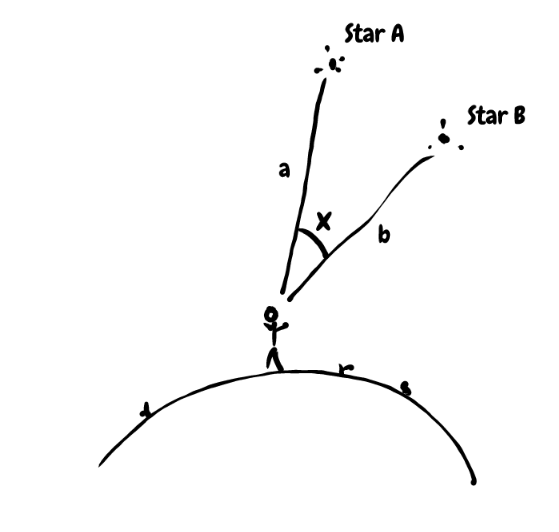 To do this, you can use an inclinometer, which measures the angle between the ground and where you are looking. Find the angle to the first star, then the angle to the second star and subtract the smaller of the two from the larger to find the difference.

Once you've done that, the distance between the two stars is:

Or, without the notation:

This works because of the law of cosines, which demonstrates how to find distances and angles in non-right-angled triangles.

It's basic trigonometry. In this case, the rule is known as the law of cosines:

You already know distances "a" and "b", so all you need to do is measure angle "C", which is a simple observation from Earth, in order to calculate distance "c".

From Math Is Fun.

Sorry this has taken a while to bring up to Hard Science standards but here we go.

If you want to calculate the distance between a set of stars you're interested in first you need to create Sol relative XYZ co-ordinates for all the stars you're interested in. This requires the distance from Sol, the right ascension, the declination and some trigonometry, once you have those co-ordinates you can create a simple table that compares the various co-ordinate sets and gives relative distances between any given pair of stars.

Assuming you're working from a data table like this one from Wikipedia the first thing you need to do is convert the Right Ascension and Declination into usable digital figures, for most software based computation that's actually Radians but degrees are an important intermediary step in my opinion, because the conversion is relatively simple and so errors are easier to spot. Right ascension is tricky-ish to convert at first but basically one hour of Right Ascension is 15° so divide the seconds(s) by sixty, add that to the minutes(m) divide the result by sixty again and add it to the hours(h), finally multiple that by 15 and you have the digital degrees equivalent for the Right Ascension figure. Declination is easier divide the seconds of arc(") by sixty add to the minutes of arc(') divide the result by sixty and tack it onto the degrees(°) that gives you the digital degrees of Declination. To get the Radians needed for Microsoft Excel or similar divide those degrees numbers by 2π. The distance from Sol can be in LY or Parsecs at the discretion of the mapper.

To get the XYZ co-ordinates from this data requires further working, in these equations RA is the Right Ascension, DEC is the Declination and D is the distance from Sol. With that in mind:

Once you have a data sheet of XYZ co-ordinates you can build a table of the relative distances between all the stars you're interested in. This table compares the relative position of the stars it does this by taking the square root of the sum of the products of the differences between the individual co-ordinates. In other words each cell of the table has the following equation:

Where 1 is the co-ordinate for the star entered in the left-hand column of the table and 2 is the data for the star on the horizontal header for that particular cell, the table is similar to this one showing distances between towns in New Zealand's North Island: 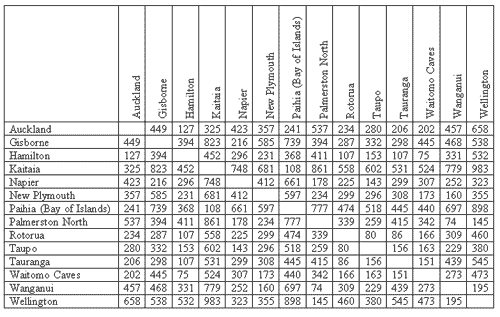 But with entries for Alpha Centauri, Proxima Centauri, Barnard's Star and so on. To find the distance between any two stars all you need do is reference them by name in the correct column and row in the table.

I have such a table for all the stars out to 25.5LY from Sol and the working data floating around somewhere, let me know if you want it.

Simply type "distance between [star A] and [star B]" and it provides the answer in a second (see screen dump below).

Incidently, the distance between Sirius and Capella is almost exactly 12 parsecs - the shortest way to do the Kessel Run, according to Han Solo. 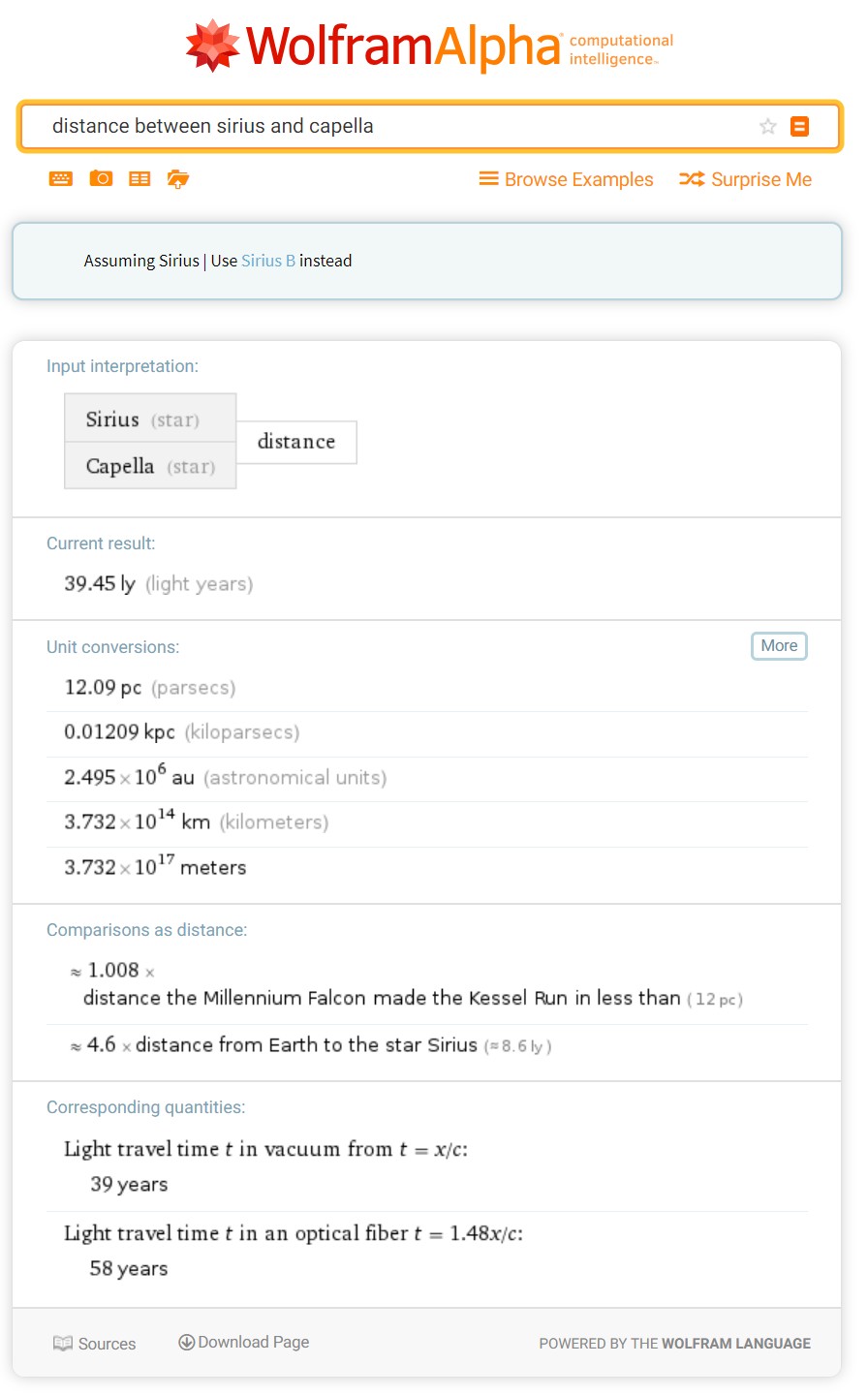 Not the answer you're looking for? Browse other questions tagged space space-travel hard-science or ask your own question.

28
Exactly how far apart are nearby stars from one another?

33
Do different star systems experience time differently?
19
How to determine one's position in space?
3
How can the human race survive the destruction of the inner solar system?
3
Assuming fuel and thrust generation are not issues, how quickly can a space-faring vessel travel without risking harm to the crew?
5
How can I find local stars that are 'gravitationally bound', i.e. moving together?
2
Is my celestial coordinate system efficient?
19
Can my spaceship figure out its position using Cepheid Variables?
10
Intragalactic velocity past the central black hole
4
Can two stars be near each other?