How to determine one's position in space?

On Earth you can find your position through GPS, with clever use of satellites, timestamps and maths. Now imagine you're on a spaceship, there no satellite and nothing is going to give you the time. Yet, you need to find where you are relative to galactic center (which is the zero of my coordinate system). How would you accomplish that?

Here are a few restrictions:

You cannot rely on a navigational computer tracking your position. Effectively, when you go through FTL, you sort of know where you end up give or take a few billion kilometers. That's obviously not precise enough.

You cannot rely on extrapolating position based on nearby known celestial bodies because there most likely won't be one, and you'd still have to figure where you are relative to it.

So far, I thought of using a set of known stars as reference points and sort of triangulate position based on them. But that would require two things:

A) That you can gauge the distance to a faraway star accurately; I guess not a problem after all;

B) That you can find a way to identify a star in a unique way, i.e. no two stars in the galaxy would have the same property/set of properties and ever be mistaken. These properties would also have to be sense-able from anywhere in the galaxy by your ship.

So I don't really see how this is a viable solution, but that may be lack of knowledge on my part.

TL;DR: How could you calculate your position in the galaxy with only on your own spaceship's ability to see things and do math?

First off, plus/minus a few billion kilometers in any direction actually isn't that terrible, particularly if you have FTL and/or are already dealing with interstellar distances. For comparison, that is on the same order as the distance from the Sun to Neptune (Neptune's semi-major axis, the diameter between the points farthest from each other in its orbit straight across its orbital plane, is about 4.5 Tm, which is squarely in that range). In other words, metaphorically speaking, it's clearly enough to end up in the correct neighborhood, if not at the correct house.

That said, if you want something better, don't use ordinary stars to try to triangulate your position; use pulsars. Pulsars abound in our galaxy (within our immediate neighborhood, out to 300 parsec, we know of eleven pulsars), many have highly specific (down to fractions of a millisecond) periods and pulse lengths, and

Certain types of pulsars rival atomic clocks in their accuracy in keeping time.

By measuring the angles (you don't need to measure distances to triangulate your position) to a set of pulsars, and measuring their period and pulse length to identify each one, you can use the same principles as used in GPS or ordinary triangulation to determine your position in 3D space to a high degree of accuracy. It stands to reason that the major limiting factor would likely be your ability to accurately measure the angle to a specific pulsar without a platform plane change (changing the attitude of your spacecraft), as well as possibly the accuracy of the on-board data on the location of the pulsars.

The angle to a pulsar could be measured using either optical or radio receivers. With enough directional selectivity (which basically means a large enough antenna relative to the wave length of interest), a sensitive receiver and the capability to measure passage of time to a high degree of accuracy, you can get a sufficiently good idea of the angles to each specific pulsar. This is similar to the early work that led to the discovery of pulsars as radio frequency emitters, and which was awarded a Nobel Prize in physics in 1974, except you wouldn't be looking around at random.

In fact, the reverse has already been done: the Voyager Golden Records as well as the Pioneer plaques used pulsars as a way of describing the location of the solar system to any potential extraterrestrial intelligent beings that may come across the probes at some time in the future.

By first making a series of shorter trips to map the neighborhood (measuring the angles to pulsars for the purpose of later reference), you could easily make a sort of map that can later be used to determine your position based on the angles from your spacecraft to a handful of pulsars.

Compare also How might Earth's location be referenced in stellar terms? on our sister site Space Exploration.

Triangulation does not require being able to determine distance. Here is an example on an earth-bound maritime navigational chart: 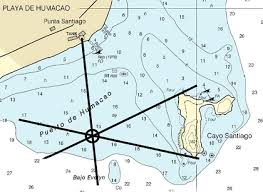 The ship in this situation would need to know in advance that it is somewhere off the west side of Cayo Santiago. After that, it just uses compass bearings to the north tip, the south tip, and what appears to be a water tank on the mainland. Draw those three lines on your chart, and there you are (literally).

In interstellar space, we will need a different reference point than magnetic north. What we probably will do instead is take relative angles between multiple stars, like this: 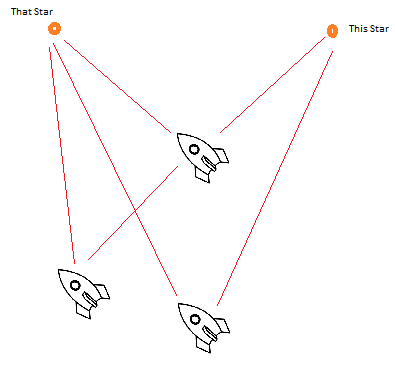 If the angle between this star and that star is 45° then we could be the upper space ship. If it is more like 30° then we are one of the two bottom space ships. Again, we don't need to know how far we are from those stars, only the angles. Of course, we are doing this in three dimensions, so we will need a couple more stars to get our position fix.

We will need to have an accurate 3-D model of the precise locations of stars, similar to how the boater needs a carefully surveyed chart of the waters he is in. Fortunately, we can get a decently good idea of that before we leave. This is done by noting the tiny difference between where a star appears to be from Earth versus half-a-year later, a concept known as stellar parallax (in some ways the reverse of triangulation.)

Estimate your position based on the surrounding stars.

You won't know exactly where the surrounding stars are, but your estimations, even for fairly nearby stars, should be accurate to within a couple of degrees. With a good description of the properties, approximate distance, and approximate direction of these stars, you should be able to locate them and use their actual positions relative to your ship to more accurately determine exactly where you are.

You are right that it's difficult to tell one star from another (while looking at just that star), and while a 2-D star map is great for here on Earth, obviously it's going to look completely different in space.

However, since we know the distances to each of the stars, we can create a 3-D star map of the known area of the galaxy. Then, using A.I., we can figure out our position based on the 2-D (or 3-D even better if possible) star map we can currently see, i.e. the computer figure out where we have to be to make the stars' positions look like this.

37
How to get directions in deep space?
9
How can I locate myself in a random point of space?
8
What would make scientists realize their planetary system is inside a hollow sphere?
-2
How to catch those beating red light in space?

31
Creating a realistic world(s) map - Stars
11
What are the consequences of literal interstellar travel?
2
The view in a binary star system
34
How can you find where the Earth is, if you were lost near Neptune?
14
Are trojan planets possible? Are habitable trojan planets possible?
6
How To Make an Earth with 27 Suns Work, Attempt Two: Orbital Stability
19
Can my spaceship figure out its position using Cepheid Variables?
12
How to provide proper documentation for a device that works as a magic lamp?