Somewhat in relation to this question - What could restrain post-singularity societies from spreading across the Galaxy?

I'm assuming not all star systems move at the same velocity in relation to the speed of light...some stars will be moving quicker and therefore the planets around them will also be moving quicker (if this assumption can be challenged, please do). Since time is directly related to the difference between a body's speed in relation to the speed of light, it would stand to reason that one colony could experience 100 years in the same span another colony only experiences 99 years.

Let's say in a distant future, humans colonize a few other star systems. These star systems are moving at different speeds relative to each other.

Just to give the background...I have the vision of an ancient race whose star saw its end. They relocated to a star moving significantly slower than the majority of those in the galaxy, and as such the galaxy around them aged quickly while they saw a relatively short time span pass.

How feasible is this? Can the speed of stars vary enough to create a pronounced effect on the passage of time between two systems, or does the variation in speed become too great to actually see a noticeable effect?

A 1% change might be feasible, but dramatic variances are unlikely. Time dilation only becomes significant as you start approaching the speed of light. You have to be moving almost 0.2C to see a 1% difference.

While a star system moving at any velocity is possible in a theoretical sense, in reality I don't think you'd encounter systems moving at anywhere near the necessary speeds to see dramatic time differences. To put this in persepective, the speed of light is 299,792 KM/s. Our solar system revolves around the center of our galaxy at about 250 KM/s. Or less than 0.001 C. Another system would have to be moving (relatively) 200 times faster than ours for even a 1% difference. 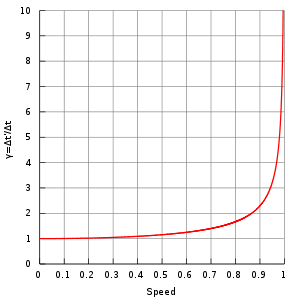 Just to give the background...I have the vision of an ancient race who's star saw it's end. They relocated to a star moving significantly slower than the majority of those in the galaxy, and as such the galaxy around them aged quickly while they saw a relatively short time span pass.

How feasible is this?

Not very. It does depend on a few things, though.

According to special relativity, an object moving relative to another measures time differently; this phenomenon is known as time dilation. An observer in motion measures a time interval $$\Delta t'=\frac{\Delta t}{\sqrt{1-v^2/c^2}}=\Delta t\gamma$$ where $\gamma$ is known as the Lorentz factor and $\Delta t$ is the interval measured by a stationary observer. We should be able to compute $\gamma$ for any star in a galaxy.

Stars don't orbit like a rigid body rotates (e.g. where their tangential velocity is proportional to their orbital radius). Similarly, they don't have Keplerian orbits. In reality, they follow rotation curves - plots of velocity as a function of radius - that are complicated, thanks to both dark matter and the fact that the galaxy isn't a point mass.

I decided to look at some real data, so I turned to galkin (more information here), which has data from a large number of observations of the Milky Way. In particular, it generates rotation curves from data from gas clouds, masers, and stars.

I took the speeds of the stars tangent to the galactic center as computed by galkin. I first plotted a rotation curve, which is fairly flat beyond $r=5\text{ kpc}$.:

I then calculated $\gamma$, the Lorentz factor, relative to a stationary observer at infinity: $$\gamma=\frac{1}{\sqrt{1-v^2/c^2}}$$ where $v$ is the star's tangential velocity. As expected, $\gamma$ is close to $1$ for all $r$; there is little time dilation due to the motion of stars.

Time also flows at different speeds for an observer in a gravitational field. The galaxy's gravitational field isn't large, and so we can apply something called the weak field limit: $$\Delta t'\approx\Delta t\sqrt{1+\frac{2\Delta\phi}{c^2}}$$ where $\Delta\phi$ is the difference in potential between two observers. To compute the potential, I used a model by Flynn et al. 1996. It reproduces the observed rotation curve very well, using a three-component model: 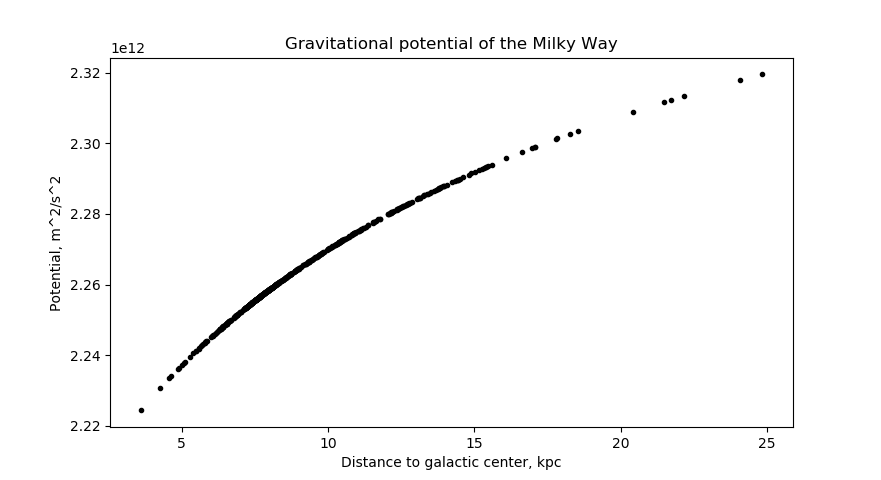 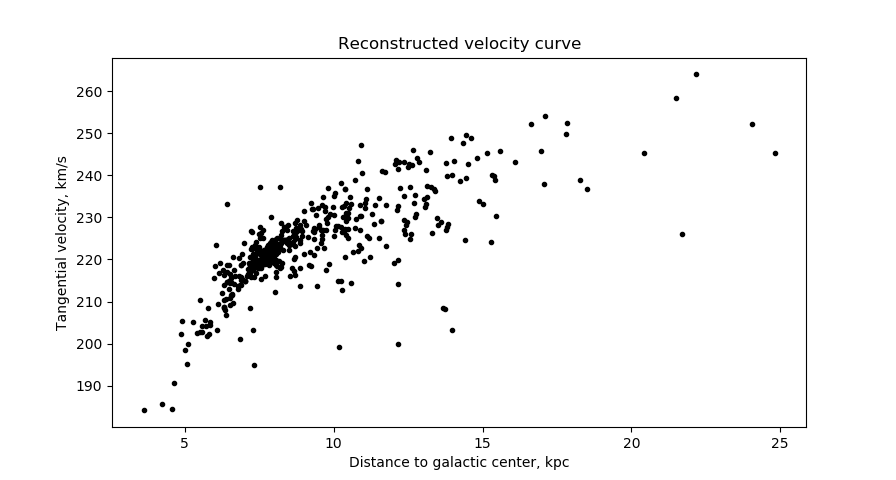 By setting an observer at infinity, I let $\Delta\phi=\phi$, and thereby calculated the proportionality constant at all $r$. It turns out to be quite close to $1$, meaning that there is very little gravitational time dilation. 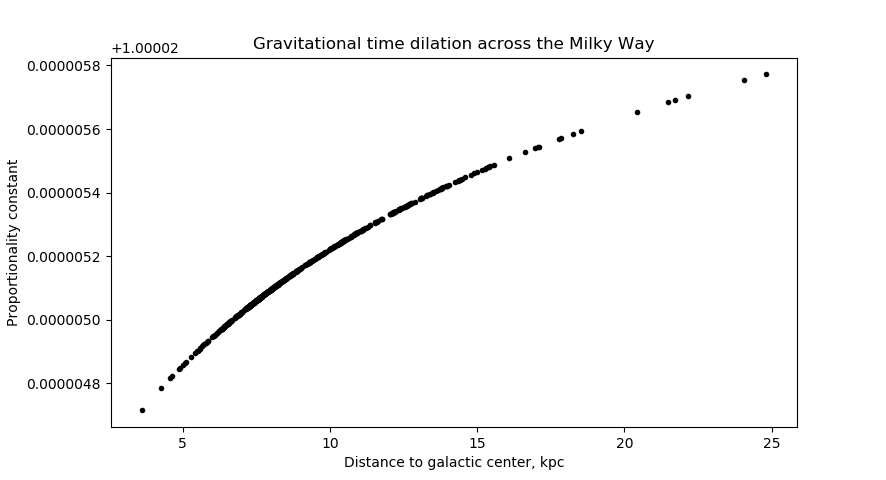 I am not a physicist, so take this with several grains of salt, but...

Basically your question is malformed in the sense that it is the changes in velocity made by travelers, not the difference in the constant velocity of planets, that matters. This is the classical "twin paradox". Just as you'd like this would result in the time having passed more in the galaxy, than for the travelers.

But there is a rather big issue. The effect relies on the traveler having made two relativistic trips. Or in short, you can't use FTL. You'd have to use some slower than light method of travel, and I don't think that getting the time dilation you want is really practical with STL. It would simply take too long. And really only be useful for single trip (for story purposes). And require unrealistically efficient engines.

On the other hand, if you assume FTL, you can fiat rule that time passes slower in FTL, and say that the ancient civilization actually escaped there...

GrandmasterB provided a good answer concerning time slowing down due to high velocities. Let me fill the gap with the gravity. Time dilatation in gravitational field is given by the Schwarzschild metric. From it follows that the factor that gives you how much slower the time flows is

To get more general estimate that is very nicely imaginable and can be approximately used for any place in the galaxy, we can use interesting fact, that for Scwarzchild solution, the escape velocity is given by the same formula as for the Newton's gravity,

Putting these equations together, we can calculate that the time slowdown at given place is given by the escape velocity to infinity like

Interestingly, this is the same formula as in the special relativity for time dilatation GrandmasterB plotted in his answer! Escape velocity from our galaxy is approximately 500 km/s, so time here flows 0.9999986 x time in the intergalactic space. So, unfortunately, you do not get any significant time shifts unless you are really close to neutron stars or black holes.

some problems (or, perhaps, opportunities) that would have to be possible:

Reports of the fastest objects in the universe [1,2] posit that there could exist planets that travel as fast as 30 million miles per hour, or 0.04473 times the speed of light. This works out to a small but noticeable time dilation. When 1000 days have passed in the rest of the universe, only 999 days have passed on the high-velocity planet. [3] In a hundred years, only 99 years, 10 months and 24 days pass on the hypothetical planet.

So two differen systems lets imagine a massive star and a white dwarf both at speed differences and different gravitational fields would create a difference in the passage of time relative to each other. Processes in the slower less masive star system will happen slower relative to the small solar system.

**the time will always be calculated by rotations, a full planet rotation would be a day that can be > or < than an Earth day. A year would be also >/< than an Earth year. The average speed of a stellar system would be +/- X % of the Solar System.

The average onward-propelling speed will also be +/- Y %. one cannot talk about clocks any more, as, in human terms, we will be living within biological time, limited by stellar-dependant time/s that could be measured by time indicators:

Not the answer you're looking for? Browse other questions tagged reality-check space stars time .

30
What could restrain post-singularity societies from spreading across the Galaxy?
10
Reasons for time dilation to happen on a habitable planet with same g force and not orbiting a black hole
7
Barring all structural and stability issues, how would building a ringworld around the earth affect it?
3
Scientifically feasible radical time differential between Sol and another star system

4
How long is a "day" in intergalactic space?
18
Massive planets around an old blue star
10
Creating realistic world - star cluster?
6
Can a moon cycle accelerate periodically?
6
Wormhole travel system: how would they connect the systems?
2
Longest possible eclipse in double star system
4
How to get time to pass faster on another planet compared to earth?
24
How might my futuristic interstellar civilisation have missed a Dyson swarm on their doorstep?
6
What are good lower and upper bounds on year length for habitable planets?