How can I find local stars that are 'gravitationally bound', i.e. moving together?

Within our local region of space are several hundred/thousand stars. I had long ago found some pretty good resources and made a starmap (using YGraph and some star catalog datasets I got from Nyrath, like 10 years ago) but in thinking about it recently, I think I need to change that map a bit - or at least double check that my proposed 'science' matches up to the places I plan to put things.

What I need is a way to tell which stars are clustered or moving together; for instance I know that the Sun and the Alpha Centauri multi-star system all move together, but Sirius, just a few more light-years away, is not moving with the Sun.

There are several important factors considered when trying to determine if a group of stars are actually from the same stellar cluster, moving group, or association:

If stars satisfy these three criteria, it should be safe to assume that they all formed together, and were gravitationally bound at some point (even if they aren't today).

At the most basic level, you're asking about how to figure out if a set of stars are part of the same kinematic group or kinematic association, meaning that all of the stars move together, even if they aren't gravitationally bound over long timescales. There are several different types of kinematic groups - and here, by the way, I exclude globular clusters.

What you're talking about is a kinematic group - a term I'll use to describe both stellar associations and moving groups. What matters is that the stars formed together and are moving together - age doesn't really matter, although I assume you're talking about older stars. By the way, particular subtypes of kinematic associations are OB associations (composed of massive stars) and stellar streams (the remnants of a satellite galaxy destroyed by tidal forces).

These kinematic associations should display the same proper motion - that is, they should appear to stay together as they move across the sky. By determining their radial velocities - the components of their velocities towards or away from Earth - astronomers can compute the motion of stars in three dimensions.

This is commonly used to find the members of a stellar association or moving group, and can be simply done, using a telescope and spectrograph - although it make take time to notice significant proper motion. It can also be applied to smaller systems; for instance, Deacon et al. (2016) showed that 2MASS J2126-8140 is likely bound to the red dwarf TYC 9486-927-1. This involved studying the motion of the $\beta$ Pictoris moving group, the Tucana-Horologium association, and the TW Hydrae association.

It is often assumed that the members of a kinematic association formed at roughly the same time, although multiple discrete waves of star formation occurred. The age of an individual star can be determined in a few ways. These normally involve measuring its mass and other properties, and modeling the evolution of such a star over time, comparing the model at different ages to the target star. Other methods, like gyrochronology, do exist, but I'm not sure how widely they're used.

Another approach involves studying the age of the putative moving group as a whole. This can be done by plotting the stars on a Hertzsprung-Russell diagram. If the group is old enough, some of the stars should have left the main sequence, forming what is called a "knee" on the diagram, or a "turnoff point" - the point on the main sequence beyond which all stars in the association have evolved off the main sequence. If a star appears beyond the knee, then, barring the possibility of a blue straggler, it is unlikely to be a part of the group. 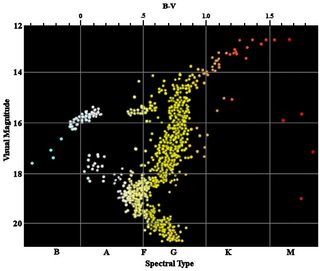 A Hertzsprung-Russell diagram for the globular cluster M3. Note the knee off the main sequence and the bunch of blue stragglers at the left. Image courtesy of Wikipedia user RJHall under the Creative Commons ShareAlike 1.0 License.

I can't give you any easy formulae to try this one out on your own; this method involves computing stellar evolutionary tracks, and those are fairly complex. However, a number of codes exist, and some are available for download. MESA is a common one used by astronomers, and can be downloaded and used by you, if you want. I haven't tried it out yet, but I know it's commonly recommended.

The pre-generated Geneva grids are also widely used (see Eggenberger et al. (2008)). You should be able to access them through this page, which gives a brief description of each. The Geneva models are also commonly used; most importantly, they cover a broad selection of stellar masses and metallicities, so given a certain star, you might be able to find a model to match.

The stars in a kinematic association likely formed at the same time and from the same molecular cloud or cloud complex; therefore, you would expect their chemical compositions - and, in particular, their metallicities - to be the same. With the exception of chemically peculiar stars (arising from various processes), the group of stars might show the same spectral lines, for the most part - with expected variation in strength depending on temperature (and thus spectral type). The metallicity in particular is the key property, and can be readily measured via spectroscopy (spectroscopy, by the way, is the underlying theme for today).

I'm less familiar with the criteria for deciding for sure whether two stars are part of the same kinematic group, and I can't point you to a whole lot of stellar spectra databases, but I know that the ESO has a solid library of spectra for a variety of spectral types, as does the Sloan Digital Sky Survey (albeit for individual stars). Looking at spectral databases should be a starting point for you; reading spectra can be a helpful skill.

To figure out a star's motion relative to another star, all that is necessary is to measure both stars' velocity relative to us and transform the measurement into the reference frame of one of the stars (using a Galilean transformation).

There are two types of velocity that a star may have: Velocity towards or away from the observer ($v_r$), and velocity against the sky ($v_\theta$ and $v_\phi$).

Stars that are gravitationally bound in binaries (a majority of stars are in binaries!) are easily detected using only the Doppler shift in their spectrum, which will be periodic with a period equal to the orbit. This is already easy to do from the Earth, so any advanced spaceship could easily detect the relative motion. The fact that the motion is periodic clearly indicates that the stars are bound, and also tells you a great deal about the system.

For stars that are not in binaries it's a bit more difficult. Measuring a star's angular velocity against the sky is more difficult than measuring its radial velocity using the Doppler shift, and you need some way of finding the distance to the stars to convert angular motion into physical velocity. But assuming a good enough instrument and a long enough observation period, it can be done, and you can find the relative velocity using the equation above.

Not the answer you're looking for? Browse other questions tagged space astronomy stars .

80
Can stars that are not powered by nuclear fusion exist?
13
Can a star be so distant/isolated that its 'Earth' can't see other stars?
3
How long would it take us to detect a Deimos-like object moving towards Sol from Alpha Centauri
7
How can a planet orbit two or more stars simultaneously?
7
Radiation from binary star systems and how that would affect a planet orbiting both stars
2
How do we know that distant stars and galaxies are real?
5
How Far Can The Stars Ve and Vili Orbit The Main One, Odin?
6
I can't seem to find correct starbuilding equations that work together anywhere and am generally confused. Which ones do you use?
4
What would the atmosphere of the Archaean Earth look like? (Before massive oxygenation)