If quadruped mammals evolve to become bipedal will their breast or nipple change position?

As the title says, you know stuff like minotaur, lycanth or werewolf, cat or dog folk, etc especially for the female specimens.

And I heard carrying baby is the reason primate breast developed around chest (correct me if I'm wrong) so just consider in both situation if this quadruped mammals carrying their baby (or whatever real reason that make primate developed their teats there) and if they don't, what the musculature especially their breast or anatomy would look like in both situation, considering most of them have multiple breast or nipple.

Reason why I ask this? It can help me see how their muscle look especially for female and help me to imagine what attire and armor can be look like for them.

Also just in case I consider human chimera type like centaur, harpy and other mythological or fantasy creature that basically human body (especially that have human breast already) strap with animal part is not part of this question. It mostly for pure mammalian animal maybe exception if they only have human face and the rest still animal, like sphinx for example, with other matching criteria I describe, if there such a creature.

Mammals (males as well as females) have what are called "mammary lines": 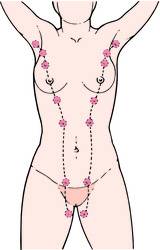 This is a bilateral structure that rules where mammary tissue can develop. Apes (among whom humans) generally have two and those towards the cephalic end of the line. Some people have three or four. Many quadrupeds have breast tissue at the caudal end of the lines --- a cow's udder being the best known.

Not all quadrupeds are built alike.

Dogs, wolves, cats, pigs and so forth have many operational breasts --- eight or ten, and all up and down the thorax and abdomen: 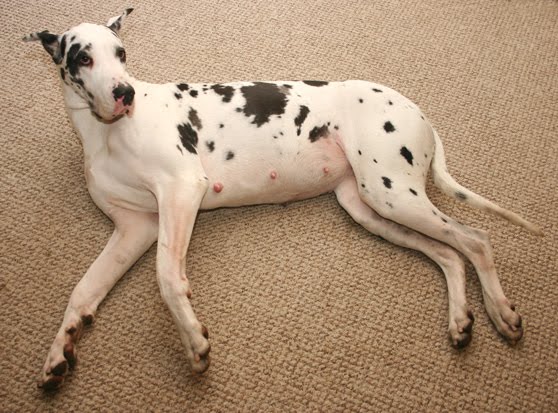 Note that bears have four breasts and are already in the "human positions": 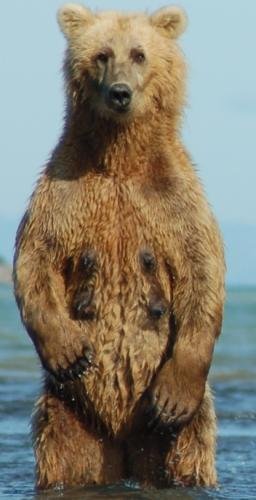 Same goes for elephants, who have two: 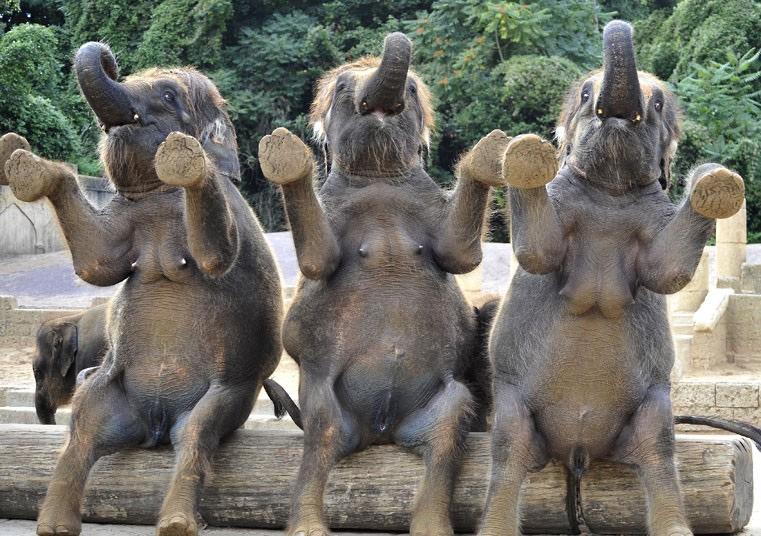 My answer would be:

Carrying babies around is not likely to be the cause of breast migration. Newborns already have the ability, if left to their own devices, to crawl and find mama's breasts. Most primate babies are pretty good at gripping and hanging on to mama as she moves around. Evolution isn't reactionary. The animals that evolution happens to react to the vagaries of its change.

Edit: (With Elemtilas' permission via JBH). IMil points out that if we all came from one source animal, then nipples most certainly migrated as today they are on different locations for different mammals and have different counts. However, from an ultra-simplistic point of view, all mammals basically began as quadrapeds where babies sat on the ground to reach over to, or up to, the teats. Yes, bipeds must lift the child to make up the difference (or lie down). But since they're capable of doing so, and perfectly willing to do so, there's not been evolutionary pressure for the nipple to move for bipeds.

However, if 100 million years from now they were to migrate, they'd probably migrate to our ankles or hips as those would be far more convenient than the stomach, which would get in the way of playing video games.

Since your basic question boils down to a fantasy race, I'd suggest that it's your world, you make up the rules. But do consider the following:

Sure, it's called convergent evolution.

analogous traits arise when different species live in similar ways and/or a similar environment, and so face the same environmental factors

Natural selection expressed through (first) survival, and then reproductive success, ensures the continuation in the species of those traits which enable the organism to reproduce. If it became an advantageous survival trait, then yes, the breasts could migrate (so, for example they could run without udders being ruptured by collision with their knees. - But that's an oversimplification - in practice the upright walking and the breast migration would occur in a not-independent way, over considerable time.

That being said, there's an alternative: Atavism, a phylogenic trait - ie. one which has occurred in the past-history of the organism's ancestry, but the environment has resulted in the gene being switched-off - is of necessity switched-on again. You need to ask yourself "what is deep in this organism's past that can be switched-on again? That could result in the breast's being developed here (ie. wherever your story demands).

This all being said - it's all up-to-you as the writer to make a decision as to how much to give explanations. Sometimes the idea that the reader comes up with their own explanation is useful. See: Death of the Author. (That is also an oversimplification).

Now that you mention it, there might be an issue with that.

If they were of any decent height relative to the babies, then they'd have to carry them to suckle. With mammaries in the abdomen like most mammals, the mothers would have to be cradling the babies right against their lady parts, which is hardly a good idea - mainly, either could get an infection of some sort. Also, what if they were menstruating? Additionally, it's much easier to carry things against your chest than at your hips.

Perhaps you're right and it would be beneficial for the mammaries to migrate upwards.

I think SealBoi hit the right note, in that the question you should be asking is "how do my critters nurse their young?". If they always lay down to let their babies suckle, there is no reason for "migration" or other changes to occur. If they need to suckle while standing on two legs, that is a good reason to transition to a more human-like anatomy.

The reason I'm posting an answer instead of a comment is to address one of your other questions; what would these critters' attire look like? While answering your question as stated is relevant, something else to keep in mind is that most non-lactating mammals are flat-chested. Human mammaries, which are always prominent, are the exception rather than the rule¹. (One of my favorite examples is from "Uhurah's Song", wherein one of the felinod aliens asks a human female what happened to her young, having mistakenly assumed said human to be lactating.) As such, unless you adopt this trait also², your female attire is likely to be divided into "normal", and one or more varieties to accommodate gravidity and/or lactation. (On which note, do keep in mind that humans have special "maternity" clothing.)

(¹ ...and before you mention cows, make sure to find a picture of a non-dairy cow. Dairy cows are always lactating, not to mention the effects of selective breeding for milk production.)

(² ...which would be strictly for fanservice. Literally. To wit, I remember reading a claim somewhere that the only reason human females always have pronounced mammaries is because of their "effect" on human males, specifically, as an incentive for "dad" to stick around. By corollary, if your critters' females are typically single moms, there would be no reason for this trait to develop.)

5
What will the abdominal muscles of non-primate humanoids look like?

20
Anatomically Correct: 4-legged sapient creatures (“centaurs” etc.)
15
Mermaid Buoyancy: Oily Livers, Swim Bladders and Lungs
7
If Homo Sapiens Had Four Receptors
9
The Science of the Marsupilami
1
Is the evolution of my aliens realistic?
14
Where are all the non-aquatic mouthbrooders?
6
If mammals with paws were to evolve to have human hands or fingers what would their paws/pads look like if they still retain it?
10
Can a horse-sized flying creature grab and carry a human's weight while flying?
3
How make look feminine and masculine (non mammalian) animal humanoids?
5
What would be the physical characteristics of a sapient, mountain-adapted, gliding mammal capable of magically producing thrust?