As you know, mythical animals like the gryphon, dragon, wyvern, roc, etc can carry things as they fly.

For a big creature to fly, it either needs to massively increase the spread of their wings or have hollow bones which makes them fragile and unable/unsuitable to support a human to ride them on the back while flying. (This is as far as I know, correct me if I am wrong.)

So, I wonder about carrying or transporting a human using their feet, talons, or hands, like how eagles carry a goat/lamb. Will this allow them to fly while not hurting them? How big do they need to be so they can carry a human with their feet? Will this require a significant increase in their wing or leg size? 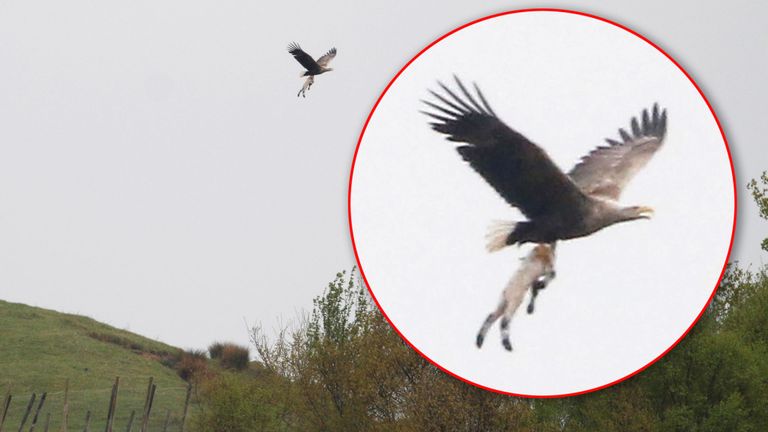 From: Rescued from an Eagle's Nest co-directed by Edwin S Porter and J. Searle Dawley for the Edison film studios. 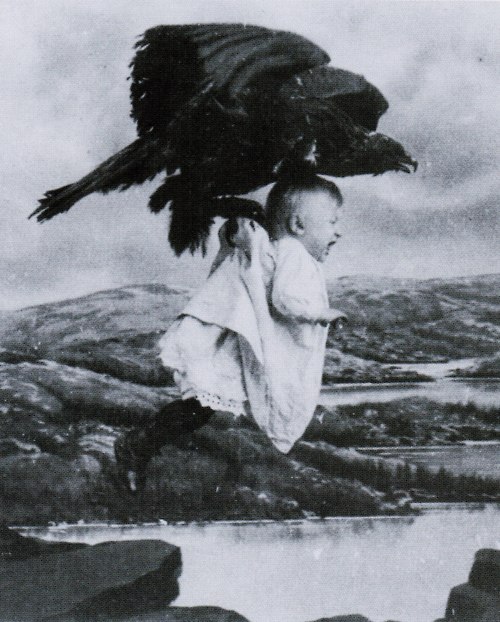 I imagine the saddle would be like a swing, either the links or chains made of leather or metal. (Metal probably use for military to discourage or prevent a flying enemy cutting the link/chains. And, at least I assume if an enemy tried charging on the swing saddle it would probably tangle them both, so both would go down.)

The base would be made of leather. To make them more for civilian use, I also consider a cage or type of basket. It could also be made of wood or metal to allow them to stand better so they can be more versatile to dodge an attack. The only problem would be if the flying creature flies to fast or strong enough to make the swing level a full horizontal angle during flight.

I also assume the rider could control the flying creature using paragliding type of reins to maneuver around or use body movement, weight, or pressure to steer the animal in this case (but not sure can it work or not).

After the flying creature manages to fly using airport runway, it would catch the saddle positioned at the end of the take off and lock into a shackle on their feet, hands, ankle, or wrist, either just the two legs or all legs if it have four or more. Upon landing there would be a pole or second floor, so the flying creature could perch on to rest while below the rider gets off and/or saddle is removed from crew on the upper floor.

I assume the rider use throwing weapon or hand-reloaded crossbow for their range weapon, which have lower poundage because using warbow or stronger poundage crossbow requires both hands to shoot and firm footing. That seems risky not include how to reload the high poundage crossbow, but maybe it can be achieved while sitting like horse archer. I don't know how horse archers work, so correct me if i am wrong.

If carrying them as I described is impossible, what would biological back designs or modifications look like so a human can ride this big flying creature without hindering or injure them?

I know there is a question: Can somebody live being carried a long distance by a flying, predatory creature? This is what I have checked so far. But, it is mostly about the survivability of being carried/grabbing purely on the body, not even the possibility of flight. My question is about being carried using a swing or pouch not directly on the person body, like stork carrying baby, but held by the feet rather than mouth. Then, that makes me wonder about the possibility of a giant pelican mouth, but i guess it is probably best to ask that in another question.

the question How to make a viable flying mount? that revered as duplicate seems more asking how to carry human without any clear specification, and also seems more regarding carry or ride on the back and method of flying as far as i brief check the answer and the question, none or just a brief mention in one of the answerer talking about bird carry small mamals and thats it no further explanation, while mine is specifically about carrying by grabbing using their leg and have special saddle and iam not asking a method to fly no jet propulsion or baloon etc just simple bird type flapping or gliding to fly.

Science based reality check – no it would not be possible for any sort of bird to carry an adult human because the human would be too heavy. A small child might just be carried. https://www.quora.com/What-is-the-maximum-weight-a-bird-can-carry-while-flying If you want humans to ride birds I suggest a planet with lower gravity and a greater proportion of oxygen in the atmosphere would help greatly

I wasn't aware there were any horse-sized flying creatures. I suspect it's that pesky cube square law again.

Not the answer you're looking for? Browse other questions tagged science-based reality-check biology creature-design flight .

21
How to make a viable flying mount?
7
Can somebody live being carried a long distance by a flying, predatory creature?
5
How would you design a race of small humanoids such that they could ride a Quetzalcoatlus?
3
Gryphons as mounts

8
How to make a saddle for a feline mount
7
Can somebody live being carried a long distance by a flying, predatory creature?
9
Would centaurs shoot more accurately than a cavalryman from horseback?
4
How heavy can a dog-sized creature be with wings about 2-3 times its size?
14
Could a creature carry its own biome and be self-sustaining?
3
Scientific explanation for summoned creatures
2
How big does a pelican type creature need to be to carry a grown up human inside its mouth and still fly?