If Homo Sapiens Had Four Receptors

Today, most mammals have dichromatic vision, meaning that they have two color receptors. Which color depends on which species you're asking. For example, the real reason bulls charge at matadors is the way they flaunt their flags--cattle CAN see color, but red does not register.

Other mammals, like dogs, have a different kind of color blindess: 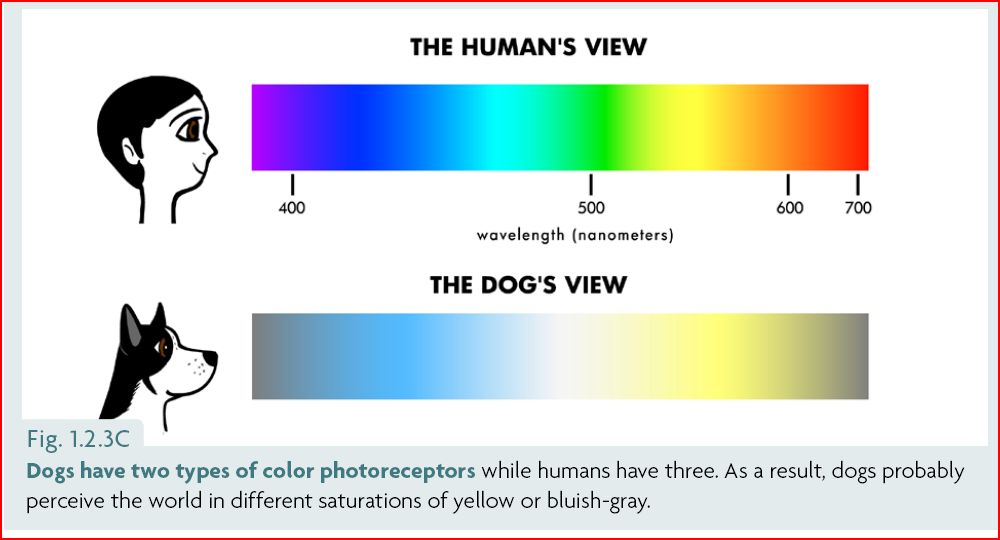 Trichromacy, having three color receptors, is pretty common among the whole animal kingdom--for example, we have recently found the "red" gene in turtles--but when talking mammals, exclusive to only one order--the primates.

Regardless, reports have been popping up in recent years of humans possessing the gene that results in tetrachromacy, FOUR color receptors. As proof, just Google up Concetta Antico, an Australian artist who has been getting quite a popularity for letting her genetic condition inspire her paintings.

Night vision is primarily handled by rod cells, which have little colour perception - so it seems unlikely that tetrachromacy (which presumably affects cone cells) would improve it at all. In fact, you may find the opposite happens - if it requires an increase in the number of cone cells then it may be at the expense of rod cells; this certainly seems to be the case in nature where animals with better night vision than us (such as cats) have worse colour vision.

Probably not. The Wikipedia article on night vision lists the main reason for humans' mediocre night vision as the lack of a tapetum lucidum. Many dichromat animals possess this and have excellent night vision, so tetrachromacy would be unlikely to help.

There would be some interesting other effects, too. According to various sources, tetrachromats experience an extremely wide range of color variations imperceptible to normal trichromats. If everyone was a tetrachromat, everyone would have this extra experience. I would predict that visual art would become even more important in society than it is in real life. Other mammals would no longer be color-blind by real-life human standards, but would still be by fictional human standards. And then there would be pentachromats arising from mutations, too... Apart from that, not that much would probably change.

No, It would do the opposite To have color vision with more pigments we would have more cones in the eye, thus we would have fewer rods in eye, making our night vision worse. Rods are the cells that can handle low light cones don't work in low light. There is a reason mammals have better night vision than birds. Tetrachromacy is actually the norm for most terrestrial life, mammals lost most of their color vision (2/4 pigments) in return for much better night vision.

7
Ideal Centaurs: A Torso and Four Legs
9
The Four-Winged Angel
0
Four Color Receptors and One Mirror--A Good Mix?
5
Scientific Accuracy - How could Homo Sapiens effectively communicate with this aquatic alien?
15
See more colors?
5
How much can I expand human color perception by adding new photoreceptors?
2
Four-legged Flying Animals
4
How would my Homo autisticus evolve?