The Science of the Marsupilami

This just out of curiosity and interest, could something like the marsupilami exist in our world? If you don't know, the marsupilami is pretty much a bipedal, arboreal monkey like monotreme (egg-laying mammal) native to the Palombian rainforests (which are fictional) of South America. Its most noticeable feature is the absurdly elongated and slender tail, which can grow over six times its body length. More than just prehensile, the tail is extremely flexible, able to be bent and shaped into knots without sustaining damage; perhaps suggesting an internal structure rich in collagen, similar to that of the hagfish of deep oceans.

Both the male and female are able to use their tail as a weapon, by tightening the end into a fist which they can use to send jaguars flying or running home with a black eye and the remainder of the tail into a spring-like spiral for maximal force

The tail can be used for locomotion in a number of ways, including being used as a spring.

It is also mentioned to have gills for some odd reason which is probably inaccurate for a mammal.

Also renowned is the strength of the Marsupilami, far greater than what would be expected from an animal of its size. It is, however, a gentle and easy-going creature if not provoked. Its sharp intellect is betrayed by the use of tools, making it possibly the most sophisticated of all monotremes.

They are known for their distinct call: "Houba!" (by the males) or "Houbi!" (by the females); but are also able to mimic other sounds, including in some cases human speech.

The Marsupilami is omnivorous, its menu principally consisting of fruit, insects, and piranhas which it catches by using its tail like a fishing rod.

As a monotreme, it lay eggs while having mammalian features.

An astute creature, the Marsupilami lives in small family units and builds elaborate nests in the canopy; made out of sticks, vegetation, and ropes, and stuffed with bird feathers and decorated with flowers.

This nest is also built in such way that allows it to lock closed like an oyster in case of danger.

Question- The question is: could an animal like this exist in our world? How could its ancestor get to South America in the first place?
(http://www.deviantart.com/art/Marsu-species-253660899, turns out there an African, Asian and aquatic species as well as according to the Marsupilami encyclopedia). How could the long tail function and why so? How did it learn through generations to build such an odd nest? How many vertebrae would be in the tail? How can it lay eggs in this structure? And how did a cousin of the platypus and the echidna evolve a primate-like structure in body shape and what did its ancestor look like when it co-existed with dinosaurs to before the Great American Interchange?

And there's plenty of more questions such can it use its tail to catch piranhas? Could there be an alternative to gills? Could it fend off jaguars? How would it move if it ended up on the ground? And could the tail have an internal structure rich in collagen?

The question is: could an animal like this exist in our world?

The creature is viable. I would argue that the tail is the main oddity of its evolution, at some point it or its ancestor must rely mainly on its tail, placing an important evolutionary constraint on it.

The dexterity the creature has with its tail suggests an important brain evolution associated with motor skills. Paired with the fact that it is a social creature, it is not odd that it has complex behavior such as the construction of elaborate nests.

I do believe that the evolution of the tail and the construction of the nest are examples of sexual selection. Elaborate displays of tail movements (such as making knots or twisting it in a spiral) could be attractive for partners; it can be a proxy for display of construction skill necessary for a strong nest. Furthermore, the nest itself could be signaling of social status.

I want to mention the odd fur the creature has, being yellow with black dots. These creatures, being tree-dwellers from the South American rainforest did not compete with other creatures with similar fur. Furthermore yellow does not seem to be a good choice of camouflage for a tree-dwellers creature. I must conclude this fur is vestigial and was not been selected out.

How could its ancestor get to South America in the first place?

Branches of Monotremes separated in the Jurassic, at the time Africa and South America where connected. Therefore, the ancestors of these creatures could have always been in what would become South America.

While in the real world, there are Australosphenida are only found in Australia (hence the name), there is a fossil record of them in parts of South America and Africa.

How could the long tail function and why so?

As per the function of the tail, it would work similar to an arm, but with additional flexing points. Something like a very flexible long finger. It would require a dedicated region of the brain for its control, as part of the motor cortex.

The muscles in the tail would be numerous and small, allowing for fine control of the movement. This also means they are not very strong.

See more below in "The Jump"

How did it learned through generations to build such an odd nest?

There are other social animals capable of passing knowledge by example an imitation. It is interesting to speculate on the memes necessary for the creation of the nests: you need to create the wood structure, which requires picking branches, and you need to learn to pick feathers to stuff it.

In any other context, picking branches and picking feathers are orthogonal. In addition, when building the nest you need the wood structure first, so I would say it evolved first.

The first incarnation of the nest could have been similar to that of birds, with the roof being an evolution of it. The next evolution would be to fill it with leaves for comfort, which is something that may have been an accidental discovery.

By experimentation, they may have started using feathers, which yield better results. However, they did not have the practice of hunting birds (in fact, the linked lore says they eat fruits), so feathers would have been scarce, triggering competition, and becoming a status symbol.

How many vertebrae would be in the tail?

We have to consider how realistic the representation we are given are... for example consider this creature: 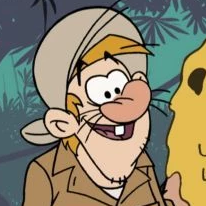 This creature has a single connected eye, floating eyebrows, rare proportions, an odd colored nose and a single tooth.

Let us consider how such a creature could have evolved... Wait that is a human? - You see, we have to take these representations as an approximation of how the creatures look like. That is why I have not said that the Marsupilami is not possible because a Monotreme would not have evolved a single connected eye in natural conditions.

Therefore, when we see the curvatures of the tail of a Marsupilami in these depictions, we cannot really tell how many vertebrae are there. This means that the only way to approach this question is by comparative anatomy.

The best approximation we have to the Marsupilami tail are the prehensile tails of primates. We need to notice that the number of vertebrae changes from individual to individual, and the average changes from species to species. See: Structure and Function of Platyrrhine Caudal Vertebrae

The closest data point I have is the Black-headed spider monkey that has a tail that grows 1.75 times the length of the body and has around 32 vertebrae in the tail (some individuals have 31, and some have 33).

If we extrapolate this linearly to a length of 6 times the length of the body, then we are looking at a tail of 109 vertebrae (give or take).

And how did a cousin of the platypus and the echidna evolve a primate-like structure in body shape?

If we go by the hypothesis that these creatures separated from other Monotremes during the Jurassic, it is not odd that they would have taken a different evolutionary path. In particular, for this creature to exist, they would have convergent evolution with primates.

The influence for such evolution would be the advantage of finding fruits high on the trees and avoiding predators. At that stage, the predators would be mainly snakes, which are relevant in the South American rainforest. However, this would put them in direct competition with new world monkeys. That actually makes a good argument for them keeping a very close social structure and being territorial.

If I were creating a setting with these creatures, I would say they were problematic for a scientist, as they may attempt to classify them in Primatomorpha, considering something similar to Lemurs. In addition, that it required modern biology to compare the DNA of these creatures and settle the argument.

In fact, the only argument I have against these creatures being primates is that they had no evolutionary pressure to lay eggs, and there are no antecedents of such mutation in primates.

Jumping was not been mentioned in the question or in the linked lore, so I disregard this so far. It is hard to imagine such a slender tail to have the muscular structure for the jump.

Looking for "Marsupilami" I found the animations, how can that be possible.

Certainly, that is not possible only with the muscles in the tail. Although for the jump, what you really need is a strong force trying to extend the tail.

We engineer this if we consider the degrees of freedom of the tail. The way to do it is by having a long ligament running down the tail. Muscles in the back of the creature would then pull that ligament in such way that it extends the tail. The bone structure must be such that it locks in the backward motion. That means that the tail will not be able to curl up (it will curl down instead, so knots and spirals are still viable).

These muscular structures would have to be very strong, and be exercised often. Note that if the tail is stronger extending than curling, it makes sense that you will want to make knots for attachment.

I would say that hitting with the tail is just the same movement (extending the tail) but instead of doing it to propel itself, it is done in the air as an aggressive gesture.

Not the answer you're looking for? Browse other questions tagged biology creature-design evolution anatomy .

9
How should I create my Merfolks to make them landbased?
52
Why would an underwater creature remain lodged to its prey?
6
A mammalian equivalent of a pufferfish?
3
Is it possible for a reptile to be amphibious?
9
Anatomically Correct Manticore
6
What Prevents Gigantic Monotremes From Evolving?
7
Alternative humanoids to occupy late Eocene Antarctica
4
Are Ulcerai Feasible?