If mammals with paws were to evolve to have human hands or fingers what would their paws/pads look like if they still retain it?

Inspired by One Piece by Eichiro Oda. 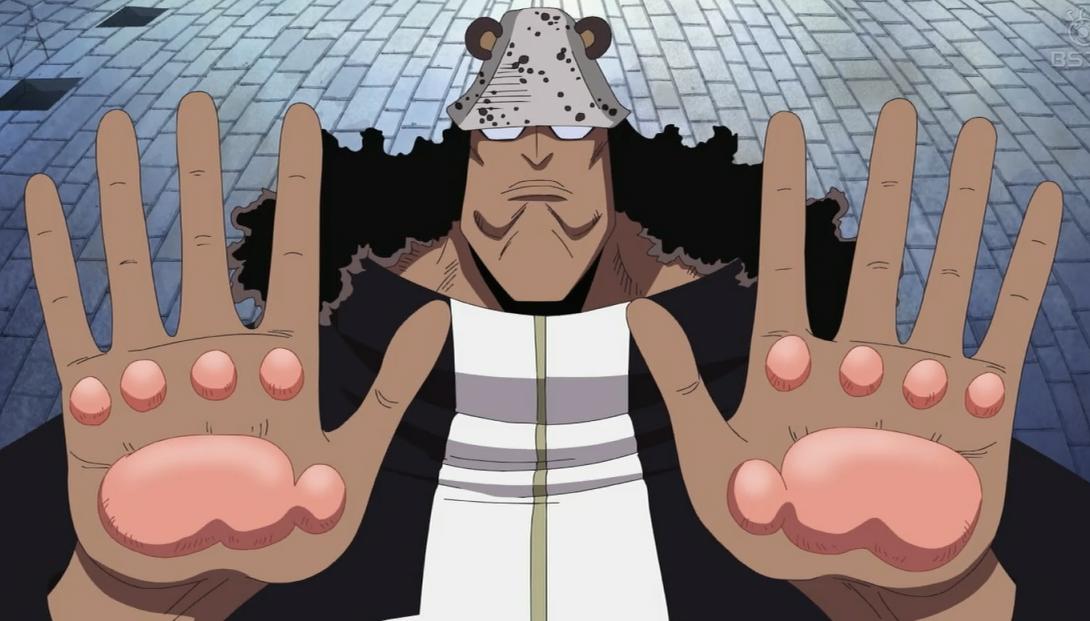 Fiction has many examples of humanoid animals - things like lycans or werewolves, cat/dog/rabbit folk, etc.

My question is this: what the Paws will forms/look like or what remains of the paw look like if they have human hands and fingers instead? Will their fingers form a paw too, or will the pads be near the palm, or would it appear random, like a blister or calluses which is more on skin contact/friction or pressure (because iam not sure are calluses is basically what a paw is since from google even paw can form calluses) ? is there any kind of paw/pads lines or paw muscle anatomy in animal hands?

I'm assuming that the humanoid animal would still have thick fur unlike humans since the paw is their way to sweat or cool down aside from their tongue or mouth (but if they can retain a paw structure even if they develop human-like skin, please explain how this might be achieved).

I imagine having/retaining a paw/pads structure would make it hard for the creature to grasp things with one hand unlike normal humans do, especially the tools shape/design for normal human hand grasping, but i ask anyway maybe i was wrong (just want confirmation).

knowing the biology or scientific/realistic anatomy forms of the paw/pads if they have human hand can help me to see and create a better grasping shape for their tools.

Your example image does not properly portray how a paw would become a hand. One of the most important things to remember about evolution is that the addition and subtraction of bones is VERY rare. Paws and hands both have the exact same bone structures, but we vary in the size, shape, and positioning of those bones. In a paw, the large pad corresponds to the metacarpals, and the smaller pads correspond to the distal phalanges; so, if a hand were to retain the thicker pads of a paw, it would look more like the second image below, not the 1st one. 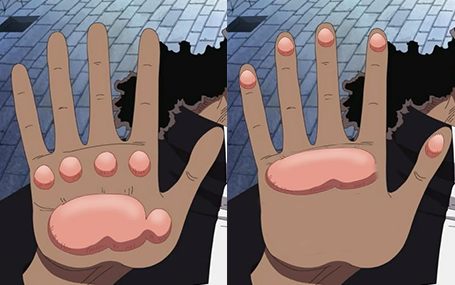 The carpals which make up the proximal aspect of your palm form the elongated third bend in the appendage of a digitigrade mammal. Mammals that develop hands need to foreshorten these carpals to bring the thumb close enough to the fingers to form a grasping hand. They also need to elongate the phalanges to form fingers. 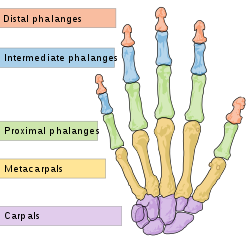 Also, the shape of your claw or fingernail does not particularly affect the ability to have a useful hand; so, if your creature evolved from a cat, it would likely still have sharp feline claws. If it evolves from a dog, it will still have blunt thick claws, etc. Humans have fingernails because our monkey ancestors evolved nails before we evolved hands. Presumably because fingernails are better for tree swinging than claws.

Racoons are probably your best example of a non-primate with human like hands. Their hands look a lot like ours, but as you can see, they still have rodent like claws. You can also see based on where their fur is thick vs thin what parts of the hand used to be paw and what parts used to be part of the leg 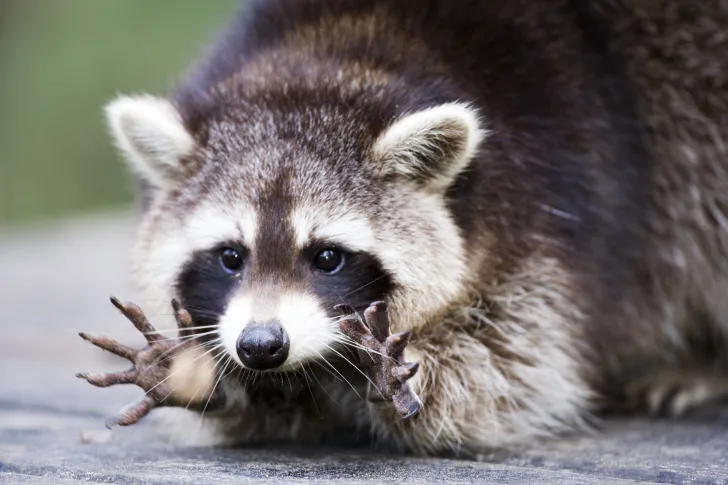 A rather hilarious answer is in this British ad for milk: 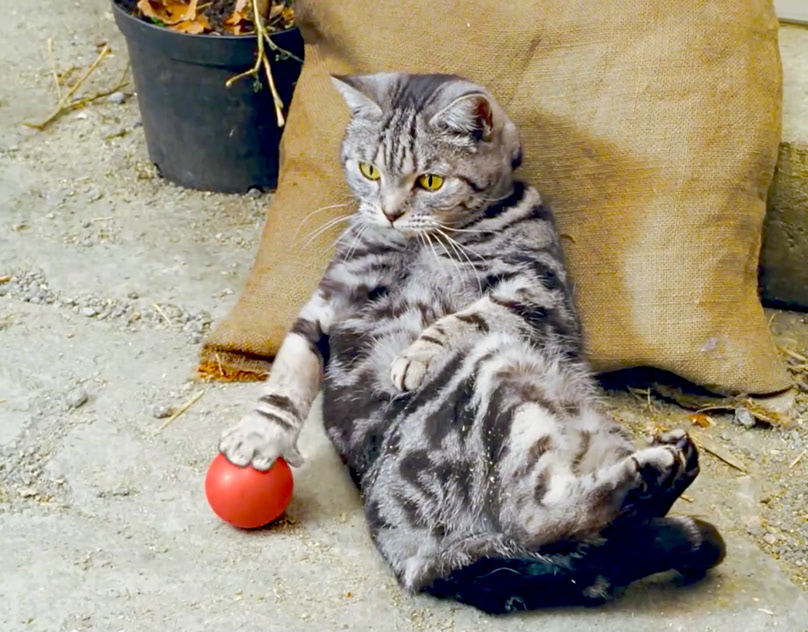 Realistically, the thumb would have to integrate with the wrist joint and the other phalanges, so a lot of exotic configurations that you might see on Science Fiction illustrations of aliens will not be feasible for creatures which are evolved from Earthly creatures. Looking at the position of the dew claw on cats and dogs suggests that there would have to be some pretty serious evolution to make a thumb derived from there useful, given the position and length of the existing structure (it would not reach the "wrist" very well, much less the "palm" or touch the fingers like the dexterous human hand).

Initially, the best that might be expected would be a crude sort of "vice" grip like the Panda's "thumb" 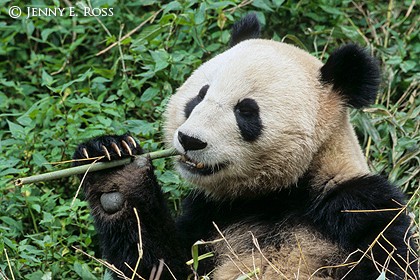 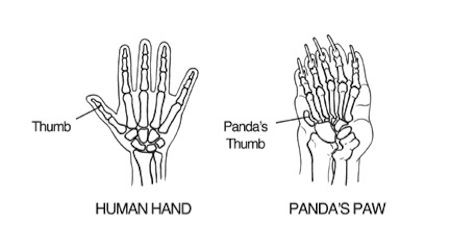 So consider the evolutionary environment, and "why" the creature evolved a thumb in the first place. There might need to be a lot of other evolutionary adaptations to the limbs or the entire creature in order to use the thumb to the best effect. It won't just be a change to the paws...

Like the paws of apes and monkeys most likely:

Tough and leathery. The material you see there in the pawlm (heh) of his hand looks almost identical to that of my dog for example.

Not the answer you're looking for? Browse other questions tagged science-based biology creature-design xenobiology anatomy .

8
Retractable claws in otherwise human-like hands?
10
Are talons and beak good enough for advanced manipulation?
4
Rock crushing hands, how to make it possible?
4
Arachnid fingers
3
How would digitigrade fingers work?
8
Naming the "hand" of a humanoid bird
1
Might this animal be able to fly?
3
How well would this hand work as a hand?
5
If other animals evolved to have similar anatomy to humans, would those with dewclaws end up with four or five fingers?