What software is available for map creation?

I'm looking for recommendations for software to build my world, physically. I want to be able to create maps of the entire world and then drill down to individual areas and define the towns and cities, before going into those towns and cities to create the layout for them.

There is an extensive discussion of possibilities on Cartographers' Guild, but the 3 options already noted are the standards: Gimp, Photoshop, or Campaign Cartographer; there are a few others, but these dominate.

They are not entirely comparable.

Photoshop is massive, complicated, and expensive. Gimp is cheap (free!), and in many ways emulates what Photoshop can do, but not in all -- and you will get burned if you think they are the same thing. But you can classify the two together.

Campaign Cartographer, now in 3d edition, is quite different: it is a vector-based (instead of raster) system for building worlds, cities, or dungeons (or whatever) from relatively simple input data. It is not the most intuitive thing in the world unless you are quite familiar with CAD/CAM suites, and it's not entirely cheap: the base program suite for everything is about \$100, and you'll want to spend another \$25 at least immediately just to get the real user manual (the Tome of Ultimate Mapping is the actual user manual, and yes, they charger for it).

In order to figure out which is best for you -- or multiple! -- you have to know what sort of map you want at the endpoint, but also the start. If you want to dump a hand-drawn map in and get something beautiful at the end, Gimp will do admirably (combined with some expertise provided by the tutorials at the Guild!). If you want to create a gigantic map that can be zoomed in and out to whatever level, with links down into cities or dungeons, all smooth, you'll need a vector program like CC3. (When you zoom in on that gorgeous PS image, down to the meter level, it's all pixels; when you zoom in the same way in CC3, you'll get a newly-rendered image.)

So it totally depends on what you're doing. Isn't that helpful? :) 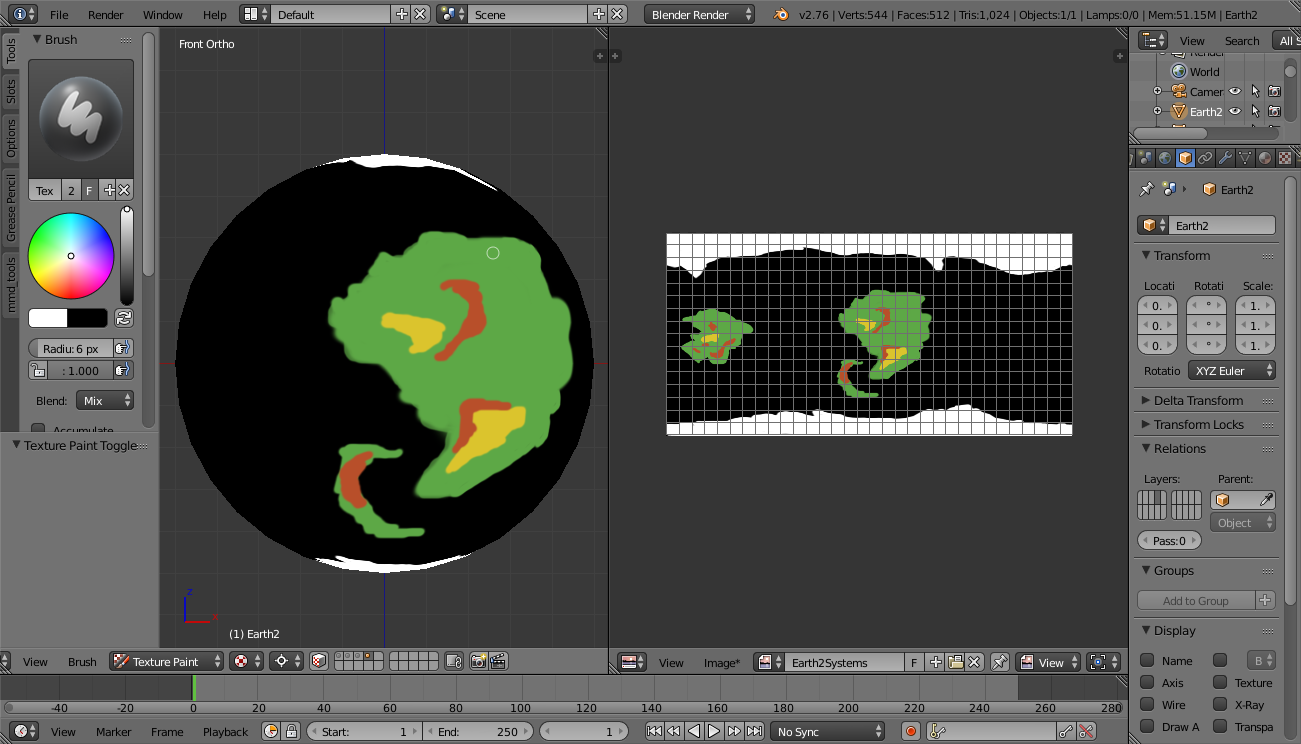 I would use Sphere Projection rather than the one used in the video. Cylinder may work too. The difference is that Cylinder will stretch the quads toward the poles while Sphere will try to make them all same size. Usually textures created from real photos of the surfaces of real planets on our solar system are already stretched towards the poles, so you need Sphere projection to correctly map one of those over a UV Sphere. Cylinder projection is useful when you already have a map created completely in 2D, and with no sense of projection, and now you want to map it to a UV Sphere. In all cases the solitary vertex at the poles will mess the unwrapping, what matters most of the video I linked is that It shows how to handle that vertex.

Also Sphere Projection won't produce a UV Map aligned with the borders of the image but there is a trick to quickly correct It. Create a temporary square texture (1024x1024), do the unwrap using Sphere Projection, this creates a nearly square UV Map but a bit displaced to the right, in the UV/Image Editor area select all vertices then press N, and in the location fields, manually input 512 (1024/2) in the X coordinate field. This will produce a perfectly aligned UV Map. Now switch to the rectangular texture, the UV Map will scale horizontally to cover all the rectangle. As textures tile, not correct the X position won't really produce a wrong result, It's just counterintuitive to work with a displaced UV Map.

Why I use Blender and not GIMP directly? If you start with a rectangle in GIMP you have no sense of projection (planets aren't rectangles but maps are), you draw a continent but when you map it over an sphere it does not look as you imagined it. In Blender you do not have enough control to work at the pixel level (in 3D view, you have a bit more control in UV editor but GIMP is still better) but you have a good sense of 3D, so the continents will look as you imagined them from the very beginning. When you finished to roughly shape the continents, you go to GIMP and correct the borders to add more fine details.

Now, to demonstrate that this method of unwrapping the UV/Sphere works, I loaded a planet Earth texture in place of the fantasy world texture, the result can be compared with real photos to check accuracy of the mapping:

The texture license is CC BY 3.0, and was found here: http://www.solarsystemscope.com/nexus/textures/planet_textures/

Cities (This is more an idea with potential than a working and tested workflow):

You can use Blender to trace the principal avenues and streets of your city. Then the idea is to use some kind of algorithm to automatic trace less important streets and place buildings. Important buildings (where the action takes place) need to be modeled by artist, but background buildings can be generated by a program. The problem here is that I didn't find such program yet nor was I successful into creating my own algorithm.

You can continue adding streets until you do all the city by yourself but that sound like a lot of work and It doesn't sound viable to me. So an algorithm to generate buildings and streets is needed. I studied some papers describing a set of techniques but some escape my current skills and others do not adapt to my needs.

Anyway I at least can initiate you in this subject. 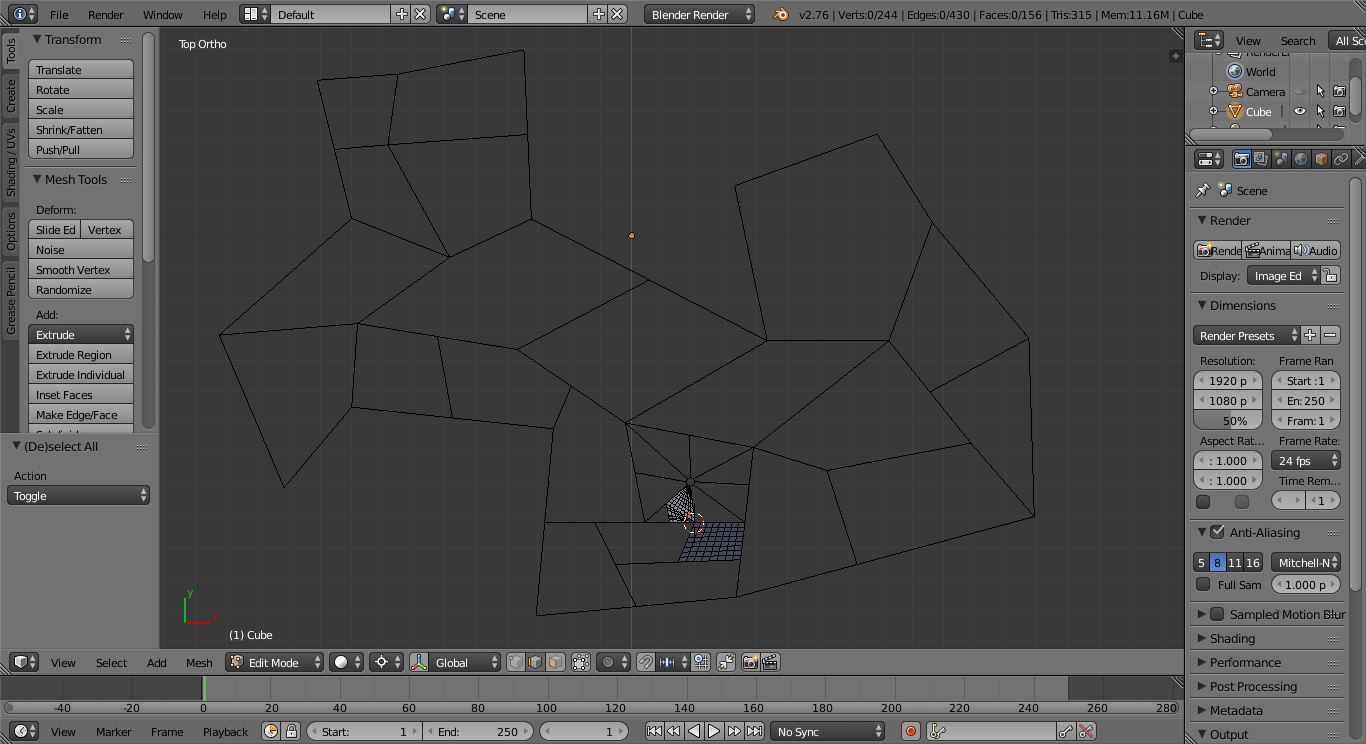 You can use vector graphics for the street map, for example InkScape, but I find Blender better to do streets maps.

Some tools that may be of interest to you:

I think that you will find - as I have - that a single software package that does everything we want does not exist as yet.

My enquiries have found pytectonics (that admittedly I haven't tried yet as it was only mentioned today) on Software Recommendations Stack Overflow for generating a world using global plate tectonics.

Given the shape of the landscape, other software could generate river systems and erosion.

As for generating maps, I currently use Corel Draw, a vector graphics suite capable of separating a graphic into layers that can be selectively shown or hidden, ideal for mapmaking as it can also be zoomed almost indefinitely without becoming pixelated. It is capable of printing sections of drawings, and it can convert vector images to pixel-based formats easily.

I have tried Campaign Cartographer, but when I tried it some time back, I found it a bit primitive and limited compared with Corel Draw. It may have changed since then.

All of this involves far more effort than I would prefer, unfortunately.

There are a few things out there. Your best bet is to design it yourself with Photoshop. But there are some tools to help you make things look just right. There are plenty of tutorials on how to do that online. You use Gimp instead of Photopshop if you don't want to pay for anything.

But, this software may be what you are looking for: https://secure.profantasy.com/default.asp

This software also seems to be good: http://www.dundjinni.com/info/features.htm. It may be focused more around making maps of rooms and houses, but it may still be helpful.

If you have no software at all, then we strongly suggest that you download 'Gimp' which is a free equivalent of Adobe photoshop (PS for short). Another useful download is 'Inkscape' which is the free equivalent to Adobe Illustrator (AI for short). Gimp/PS are by far the most preferred mapping tools of the community although there is also a strong base of users who use Campaign Cartographer by Profantasy (CC3 for short). There is also other software, such as Fractal Terrains, also made by Profantasy which give a more realistic '3d look' similar to sattelite photographs. For now, if you have no preference between any of these packages, download Gimp.

To find out more about the pros and cons of software used by the community click here.

What about the free version or pro version of any of these three programs:

all of the above three are available from this site: http://inkwellideas.com/

For something more sophisticated, there is also Fractal World Mapper from this site: http://www.nbos.com/products/fractal-mapper

list of world building (as in planets, maps, solar systems)

All of the provided answers here seem kind of sad to me. no offence, just my personal opinion. so i hope you get this and try out these websites. This isn't a totally perfect mapmaker but at least try it.

there are lots of options for map color and style. i personal suggest setting the size to 1000w x 500h and the projection type to square. this will set you up perfectly for using this amazing and free software: https://www.maptoglobe.com/ You can make your map on the planet maker, the first link, and see it as a planet with the maptoglobe application and from there you can make a gif of the planet rotating and quickly store it to look at later and easily show to your friends.

Back to the planet maker, a quick tip:
Personally, I don't like the placement of mountain ranges and the sizes of them in this world-maker, a few fixes are to select the box that says "non-linear altitude scaling" but my personal preference is to set the contour lines to "coastlines" and the map color to white. It will appear as a blank white slate with outlines of the land. Don't let yourself get confused though, while it's like this it's easy to mistake the land for the water and vice-versa lol. good luck and have fun

Not the answer you're looking for? Browse other questions tagged cities software-recommendations cartography .

3
Can Anyone Recommend a Tool for Map Building?
19
Is there software to help me model tides?
12
Is there any planet modelling software?
11
Is there a software (preferrably free) that can help me make a map from a preset land mask?
6
Rotating a map projection - software question

58
What software is available for keeping and organising notes about your world?
13
Software for inter-family genealogy
12
Is there any planet modelling software?
9
What software can I use to map my universe?
3
How realistic is the placement of the cities and borders on my map?
3
Scavenging metal resources in post-apocalypse after 100 years
11
Quick-and-simple point-and-click cartographic software to easily make a basic map
11
Anyone know of a good software for making a galaxy map?
6
Rotating a map projection - software question