Not a duplicate of What software is available for map creation? as the focus is on how, not what -- requesting useful projections for a polar context, and techniques to transform between projections to achieve this.

I've created a simple earthlike planet for a Dnd campaign I'm running, and I wanted to minimize inhabited areas to keep things simple, so I put my continental plates on the poles. I also liked this idea since a lot of fantasy maps seem to completely avoid putting continents in areas where they are more distorted by map projections. However, I'm beginning to realize why. It doesn't look good projected with north at the top and south at the bottom because everything's totally warped. I want to re-project a rectangular map with the equator at the top and bottom so I can get a clear look at my continents. I can't figure out how to do this— I've got gplates, g.projector, and photoshop but nothing seems to rotate a raster on a globe. UV unwrapping in photoshop might be my best bet at this point, if anyone knows anything about that.

For a polar centric solution it has to be an azimuthal projection, they would not normally be "square", it would not make sense (unless as a joke). Take a look at the United Nations Logo for a Whole World example https://www.quora.com/What-are-polar-projection-maps-used-for

There are many variations but a "Lambert zenithal equal-area projection" for each hemisphere would in my humble opinion be best. 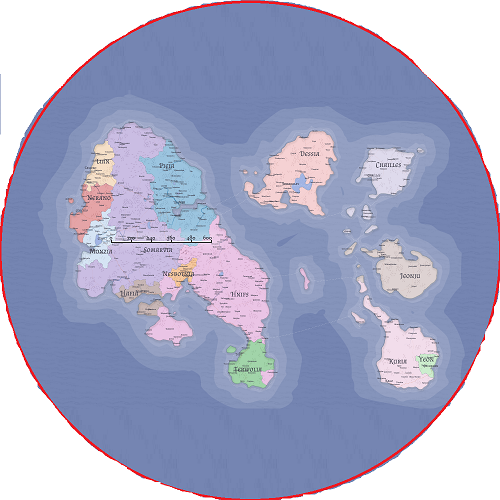 Thus if using a map generator such as this one https://azgaar.github.io/Fantasy-Map-Generator/ you would need to use a square area and cookie cut in an editor to make it round.

Change the Aspect of Projection

As you are projecting the surface of one shape onto another, the aspect is how those shapes are oriented relative to each other. Most maps you see are cylindrical projections with a normal aspect -- the axis of the cylinder is the same as the planet's axis. But it can also be transverse (sideways) or oblique (anything in between). See this Wikipedia section for more info.

To get the equator at the top and bottom, you are looking for a Transverse Cylindrical Projection. For example, a Transverse Mercator will do, but you can get the same effect with any other cylindrical projection if you just rotate your aspect first.

Those examples have curved longitude lines, but they don't necessarily have to. If the people of your world decided to draw their lines such that their East and West converge into points instead of their North and South, then all their gridlines would be square on a transverse map! However, curved lines might be necessary for timezones or compasses to make any sense... Oh and by the way, you can't show two poles without some equator between them, so notice that half of the equator is in the middle of the map.

But if your software doesn't let you change the aspect, just...

You don't have to explain to the software what you're doing. Simply place the art for your polar continents on the sides of the globe instead of the top and bottom, and then rotate the projected map afterward. Or don't rotate it! Who am I to tell you which way is up! But if you do want curved longitude lines that converge at the poles, you'll have to manually draw them onto the globe in the map software, or add your own sine wave vector lines afterward.

Not the answer you're looking for? Browse other questions tagged map-making software-recommendations polar-region .

44
What software is available for map creation?
9
Which map projection would result in an accurate visual depiction of a mega crater?

44
What software is available for map creation?
7
Default map projection
8
What software can help me render a planet . . . from space?
11
Map generator for big world
9
What software can I use to map my universe?
20
"Globe to draw on" software?
2
How do I convert part of a south pole map to a mercator projection?
10
Is there a software (preferrably free) that can help me make a map from a preset land mask?
11
Quick-and-simple point-and-click cartographic software to easily make a basic map
5
Map projection for a pseudospherical world