How can I explain the geography and climate of my planet?

I've recently decided to revive an old project of mine involving an alien planet. Unfortunately, however, I was not as good a worldbuilder then as I am now, and that's having some consequences.

Back when I started it, I drew up a map of the planet - giving only minor consideration to plate tectonics, with otherwise no scientific preparations.

I want to keep the map, so now I have to go through the agonizing process of constructing a world, starting from a map.

Here is the map of the planet: 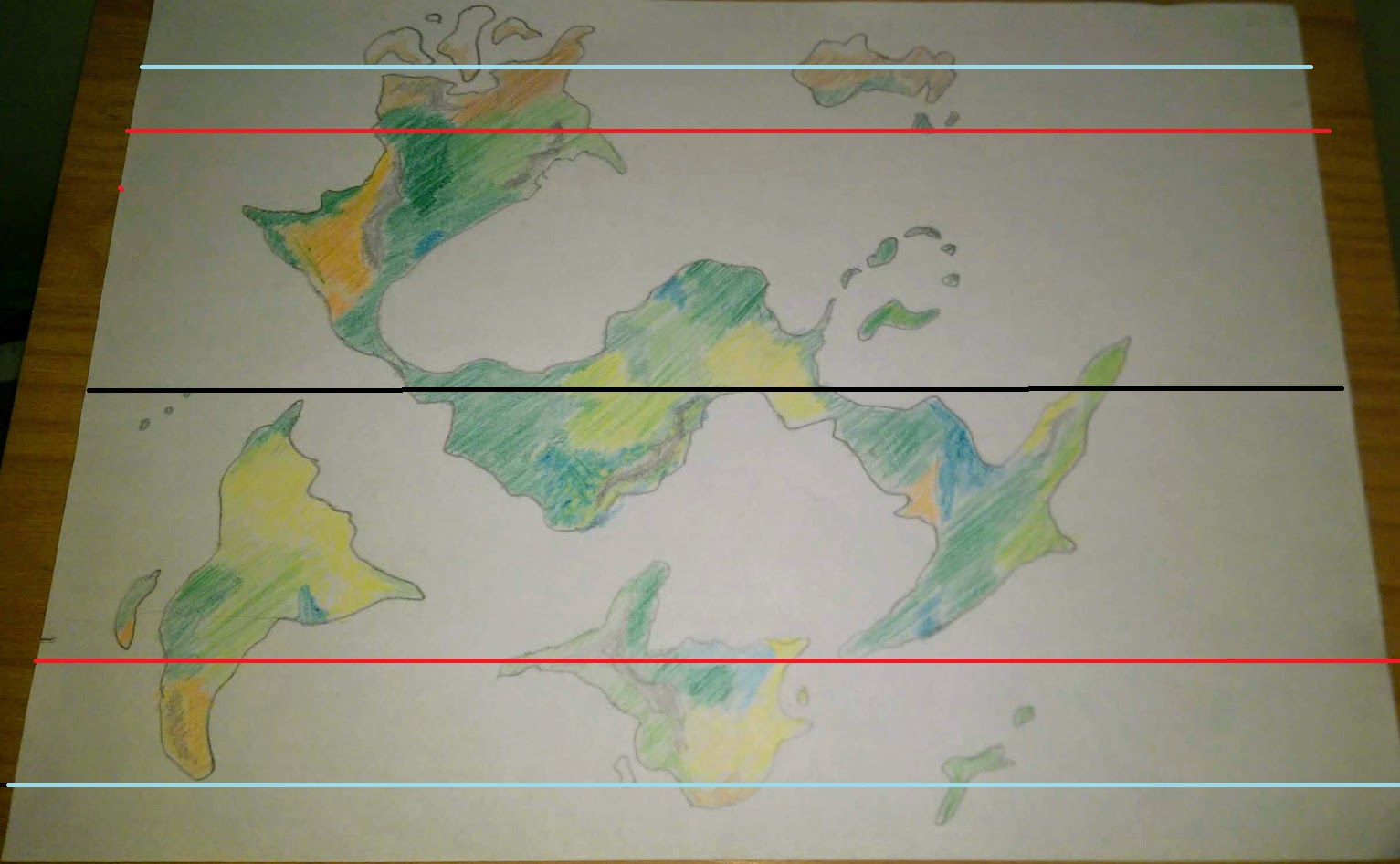 So, my question is: Taking axial tilt, ocean currents and prevailing winds into consideration, how can I justify the climate distribution of my planet? A high axial tilt would mean large tropical regions, but with the consequence of extreme seasons, preventing tropical climate within those areas.

If you require further details on the planet, believe this question is flawed or need anything else, please let me know and I will respond accordingly.

I doubt you can easily manage what you're looking for, I fear. Your map projection is not given (and I doubt you used one), so my precision is limited, but I would place those red lines at 45 N/S, and the white lines at around 75 N/S.

Tropical regions are not merely hot: they must be hot year-round (defined as 18C or higher in all months). If your axial tilt is too large, you will get too much temperature variation for any regions to be truly tropical, so there is a practical limit to how far from the equator tropical regions can be. I would place this limit at about 30N/S, which is the "horse latitudes": due to air circulation patterns on Earth (your planet will share this as well, unless it's spinning a lot faster than Earth; look into Hadley cells), this band gets significantly less precipitation, with the result that a lot of Earth's deserts are found at these latitudes, and beyond that temperatures will simply be too variable for a truly tropical region. You could substitute Mediterranean climates, perhaps.

There is one option open to you, and indeed the extent of high temperatures over your planet makes it likely, but it could create more problems than it solves. Raise your planet's average temperature (brighter sun, greenhouse effect, whatever floats your boat). Earth's average is about 15C (spread out over the surface, over the course of a year): raise that by even two degrees, and you'll get a significant impact, which is incidentally why global warming is such a feared prospect. However, do this at your own risk: regions near the equator could become too hot to be reasonably survivable.

As for your ocean currents and prevailing winds, I don't have the time to map those out for you right now, but I've posted a tutorial here that explains how you can go about finding those; you might also find this helpful.

I really think you need to shrink the tropical areas, maybe take a third of the distance between them out, because there's too much tropical to not very much temperate and then arctic.

The only things i can think of that would cause this sort of thing, would be either

The planet would bulge outwards in the middle, similar to earth but and a more significant scale, it would make the equator more arid but would give more "tropical" regions however would also shorten the days, so not sure how that would effect the tropical regions either

If the seas were shallow, then the water came warm up more easily and this would entire allow the heat to be retained in the tropical regions, would mean more rain and (monsoons, hurricanes or typhoons, dependent on where they are), but most "tropical paradise" type settings tend to be in shallower water for this reason, this however isn't perfect, as the North Sea is quite shallow (in the grand scheme of things) and it is definitely not tropical

Maybe a combination of both? but each has its own side effects, i still think the better option is to shrink the tropical regions and give way to more temperate area. then each of these options would not need to be as pronounced and therefore less side affects.

Not the answer you're looking for? Browse other questions tagged science-based climate geography currents axial-tilt or ask your own question.

12
How do I figure out my planet's biomes and weather?

7
What is the expected terrain for an arid highly eccentric Earth-like planet?
4
What would pressure belts look like on a world with continuous land?
6
What could cause the desert?
4
What vegetation/biome could I expect in a tropical region at an average temperature of 8-9 degrees Celsius?
2
What rough climate and/or biome classifications would I assign to a planet with 31.1 degrees axial tilt?
12
Would the tropic and arctic climate bands switch if the Earth's axial tilt changed to 60 degrees?
6
Can a planet have warm or temperate climates within its polar regions?
3
Climate checking my map
2
Does my climate map work?