Does my climate map work?

I'm looking for notes on my climate map for a continent I've mapped out. Does this set up seem plausible. 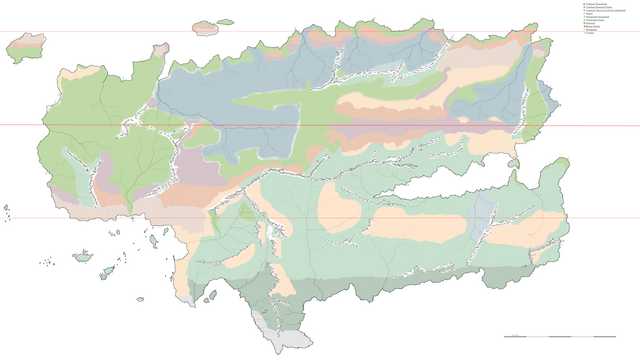 Skeltai is an equatorial supercontinent - This is a map of climate zones, mountains and rivers specifically. I left out ocean currents because the map isn't big enough to fit them in, but basically there is a subcontinent directly north that splits the northern hemisphere currents into two large gyres, one spinning warm water onto the northeast coast and one pulling colder water onto the northwest coast.

The southern ocean is largely open, with a huge current that pushes cold water up along the southwest coast.

The thick line is the equator and the thinner lines 30 degree marks.

You kind of have to extrapolate elevation - I left it off because the eventual finished map will be an in world artifact and the people drawing it have an animistic-quasi religion in which mountains are spiritually important. I also left off continental plates as of yet - but the main interactions there are the southern 1/3 or so is pushing into the north, which is creating the central mountain ranges.

Key differences from earth - slightly lower atmospheric pressure (85%) axial tilt of 13.5% no moon 40 hour days, 450 day year - there is an artificial night in the middle of the 22 hours of daylight, but extra UV and Infrared are beamed down to the planet to offset cooling, so a 'normal' amount of actual energy is reaching the planet, and plant life has been adjusted to work.

I don't have the time it would take to dissect your map in detail (especially when your map is of the significant continent but fails to include the entirety of the world), and it doesn't help that even zooming in the picture fails to make the color key or the distance scale easily legible, but I can highlight some problems that leap out at me from an overview.

Before I start: your supercontinent is basically an equatorial Eurasia. Even without mountains in the way, rainfall is going to drop off as you move farther inland. Prevailing winds tend to blow from east to west within the tropics, curving north and then northeast (or south to southeast, in the southern hemisphere) at around 35N/S. This is important, because most of your precipitation is coming from these winds and the air is eventually going to run out of moisture as it moves overland, so anything near the center of the continent is probably going to look like the Gobi Desert (if outside the tropics) or perhaps the Sahara (if near the equator).

One: your eastern coast, in the equatorial areas, is going to be very wet: this is where most of your rain forest is going to be. Everything around that huge inland sea in the eastern side, or at least most of it, is going to have a tropical climate (encouraged by the mountains that seem intent on hemming that area in): warm year-round, very wet, although I can't tell offhand if you're going to have wet/dry seasons or the year-round precipitation needed for a rain forest.

Two: your western coast, near the equator, is going to be considerably drier than you might expect. This is going to look like Spain, or northwestern Africa; expect a semi-arid climate here, because you're getting cold ocean currents flowing past that chunk of coastline and that's going to stop most of the moisture in the clouds from actually coming as rainfall. Anything farther inland on that side than the mountain ranges is almost certainly a desert.

Three: your southwestern portion (near the scattered islands, south of the 30S line) is probably going to be much wetter than you seem to expect, and warmer as well. This is basically the western Canada/USA coastline, in the opposite hemisphere; think California conditions north of about 45S, and southwards is probably a temperate rain forest (which turn up very rarely, incidentally, because moving away from the equator usually reduces precipitation: this is probably the only actual one on your map). I can't be quite sure where your 60S line is, but I wouldn't expect any tundra along that southwestern coastline (although moving a little inland could change that).

Four: I can't quite tell what that dark blue inland climate north of the equator is supposed to be (I can't zoom in the color key enough to read it perfectly), but it's definitely some kind of forest. That's going to be quite spectacularly wrong; as per my second point, this is not getting precipitation year-round and possibly not at all, so a rain forest is not happening here. The open water to the north confuses the issue (lots of water, but not necessarily any winds blowing inland), so my prediction of steppes or even desert is uncertain; this could turn out as a savannah climate with a yearly monsoon, depending on the seasonal wind patterns and pressure systems, but I don't have the time to make a proper estimate of those.

If you want more details, you can try my process for yourself; although very educational, I will warn you now that it's quite time-consuming. I summarize it in this answer, or for the full story you can go directly to the guide it refers to here, which includes links to the sources I used as the foundation for writing my own guide.

13
How do I figure out my planet's biomes and weather?
6
How feasible is my Exo Planet - Penumbra
0
What rules govern which biomes can neighbor one another?
2
What would the climate of this map look like?

4
Would a lack of landmasses at the equator change climates closer to the poles?
1
How plausible are the terrain and land-forms on my fantasy map?
6
Is my biome/climate map realistic?
6
Is my topology/are my climate zones alright?
3
Help with Pressure, Winds, Precipitation and Climate Zone
5
Is The Climate Map for My Alternate Earth Accurate?
4
Climates of a Eurasia-like continent in the tropics
6
How can I make my climate zones more realistic?
4
Does my world map make sense scientifically?
3
Deserts and Rainshadows near Equatorial Continent with North/South Mountains