The sun, moon, stars and planets of a flat world in the center of the universe

Suppose I have world, which is flat, meaning that there are edges on the side you could fall off into space, but it is actually still quite thick, thick enough to have Morias, underground castles, hellscapes and deep chasms.

I say "orbit", as the sun, moon, stars and other planets were all placed there by some great divine power of yore. The only requirement I would have for the celestial bodies would be that they do move, and in a constant orbit-like way, but completely disregarding gravity wells, and one planetary body does not affect the path and orbit of any other planetary body. This means that there could be large planets in orbits that would not be physically possible in our universe.

Another thing to note is that the sun can be of any size, brightness and distance, as there can be a hand-waved magical atmosphere that regulates the temperature of the world.

What would the orbits of the sun and the moon be like, for the world to::

space magic orbital-mechanics
Share
Improve this question
edited May 31 '15 at 13:37

The trickiest part about having time zones on a diskworld is explaining why the light doesn't just spread across the whole disk as soon as the sun peeks above the horizon. Extreme refraction of the light in the atmosphere (or at least in the bubble which keeps the atmosphere on the disk and even many levels of refraction from multiple layers in the atmosphere) could explain this - the light hits the world edge-on and the direction of travel sharply bends diskward. The edge closest to sunrise gets sunlight right away, but the sun has to get high enough for the angles to work out. This would imply the potential for the poles (ends of the axis perpendicular to the sun's path) to be forever dark, as the sunlight might not get that far out, and the night will always be a little longer than the day.

The moon would have to glow with its own light, as the disk will block the sunlight from reflecting off of it at night. This is ok, because it is a magical glow, thus justifying the fantasy concept that moonlight has special powers different than sunlight. Phases of the moon will be trickier - a crescent shape isn't likely, so you could go with an always full moon, but I like the other suggestion for a spinning disk-shaped moon for phases (even get 2 different sides of moon to play with).

Seasons depend on what you mean by seasons - different parts of the planet have different kinds of seasons. The arctic has periods of no sun and periods of no dark, equatorial regions have wet-dry seasons, etc.

Options for temperate warm/cold seasons could be the sun rotating its path - rises in the 'north' at the beginning of the 'year' (very arbitrary notions which could be completely different depending on which culture on the disk you are in), slowly migrating clockwise throughout the 360 degree/day year. The sunrise/sunset areas are warmed by the proximity of the sun, while the bits halfway around the edge are colder (the rock of the disk over there hasn't been heated in a while). The hub wouldn't experience any seasonal changes though, so either always winter (never gets close to the sun) or always comfortable (always gets maximum sunlight), depending on your preference.

Alternately the orbit could expand/shrink - the wider the orbit, the less the warming effect of the sun. This would change the length of the days so probably not a good solution - not like the real world where there is a tradeoff between day and night, but both getting longer/shorter together.

This next one is going to be a little tricky, so bear with me. Gravity - I'm assuming it just magically pulls 'down', else the edges of the disk would be like climbing a cliff as you are pulled toward the center of mass. This has implications for the atmosphere and any oceans (sail off the edge?), as where does the stuff go that falls off the edge? If we imagine the center of the disk being a hole to the other side, it could be a font returning all the air and water. The air return is usually just air, but the water accumulates on the 'bottom' of the disk until it reaches a critical level of buildup, at which point it overflows and 'spills' through the hole to be ejected on the inhabited side (like a geyser of mist into the upper atmosphere). This air could be cold, bringing winter snows, or it could be hot, bringing the rainy season of monsoons. This would also imply the wind is always blowing out of the hub, but you could go with a whole smattering of different vents which are active at different times (changes the wind directions, and allows for different areas to have different seasons).

This one is actually really easy. Simply have the sun orbit the Earth. If you think of the Earth as a small surface (rather than a big one), it's easy to see that solar movement would be just as intuitive as you would like it to be.

We need to put some wobble into the orbit of the sun. Seasons come because the sunlight comes in at more of a glancing angle. Wobbling north or south would work to create a winter. Summer would be when the sun was dead center.

Be able to see the stars and moon at night

Stars are easy, they will just work. Its up to you if you want them to rotate or not... you could just fix them in place.

The moon could be done with just another intuitive 1 month orbit. The one detail is that the moon would not rise and set every night. It would just hang in space. You could have it rotate opposite the sun, but then it wouldn't have phases (because it would always be lit from the front).

If you want both phases and rising and setting, my advice would be to apply a little ironic world construction, and make a "flat moon" which rotates about its axis to create a phase-like effect, and rotates around the planet directly opposite the sun. 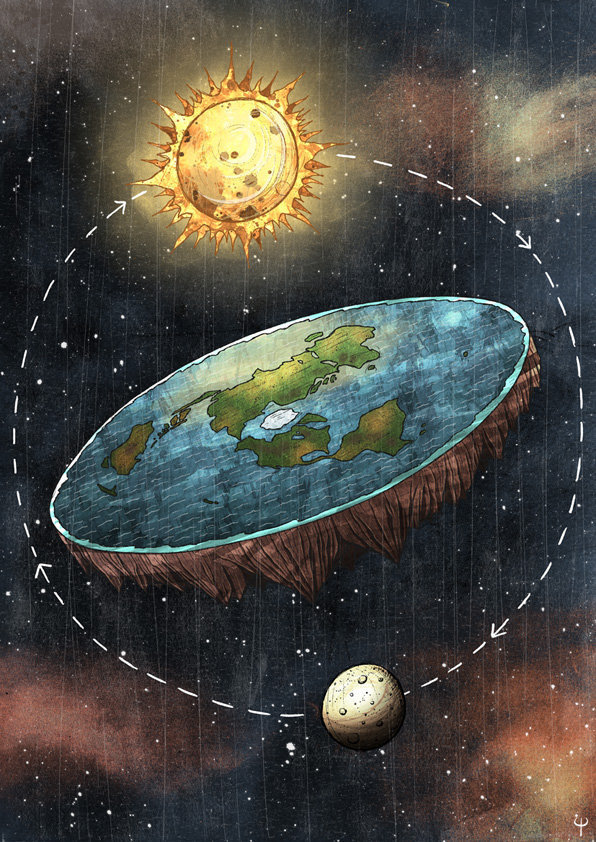 The stars and galaxies can just be stuck out far away from all of it as a backdrop.

Not the answer you're looking for? Browse other questions tagged space magic orbital-mechanics or ask your own question.

13
Could two stars of equivalent mass/size form a binary system and be different colors?
9
How would this tidally locked planet be affected by its moon and would the moon have a deaccelerated orbit?
0
ELEVEN Inner Planets?! What Will the Ice Ages Be Like?
5
Where would the Sun and Moon be within a flat Earth world?
3
How do I explain the formation of my world scientifically?
23
Could Earth and the Moon be the same size?
4
How does the day/night cycle work on a non-tidally locked moon?
8
Could I have an earth-like planet from which sun and moon would never be simultaneously visible?
14
Seasons on Infinite Cylinder Planet