Could two stars of equivalent mass/size form a binary system and be different colors?

I have an idea for a planet that orbits two stars. These starsslowly orbit each other, have equivalent masses/sizes, and while one is slightly red, the other is slightly blue. When I talk about the color, the stars are primarily white, with slight tints, just enough to notice. A year is about as long as Earth's, and a sun cycle (day) is 24 Earth hours. The rotation of this planet causes eight hours of night time, say, from eight to four o'clock on equinoxes. One sun would rise at four o'clock and set twelve hours later, and the other would rise at eight o'clock and set twelve hours later. Is this system possible? I also wonder how seasons would affect the sunrises and sunsets if the planet had a tilt about the same as earth, but more important is how plausible this planetary/star system is. I'm a little bit worried about the stars, I read somewhere about red stars being smaller and blue stars being larger.

I'm afraid what you're asking for is going to be quite tricky, at least not with a universe that operates like ours. I'll try to discuss the individual issues, and then offer some suggestions on what you can do:

... have equivalent masses/sizes, and while one is slightly red, the other is slightly blue.

Stars do come in a wide range of colors, depending on their composition and color. For the most part, however, two stars of roughly the same mass and diameter will have virtually identical spectra (color). In fact, astronomers use the spectral characteristics of stars to classify them into categories of size and mass. For more information, the stellar classification page on Wikipedia gives a decent introduction, although it is somewhat technical.

Unfortunately, this would be difficult. So-called P-type binary star systems look like this: 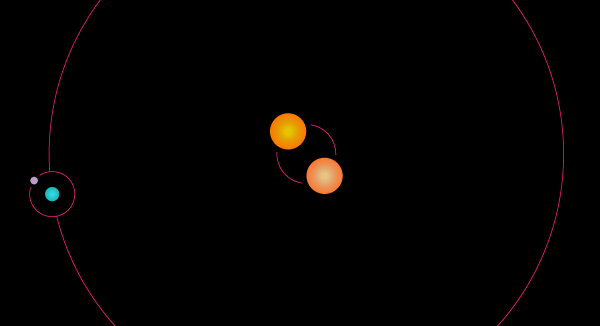 (Image mine, and obviously not to scale. The stars would be much closer to each other and much much farther away from the planet, relative to how I've drawn them, but then you wouldn't see anything.)

In order to have an Earth-like year and be in the Goldilocks zone around your two stellar objects, your planet would have to be quite distant from the center of the binary pair.

That means that the stars are going to rise and set at very nearly the same time. In the daytime sky, they will appear very close together, overlapping much of the time.

There's another possible configuration for the star system: 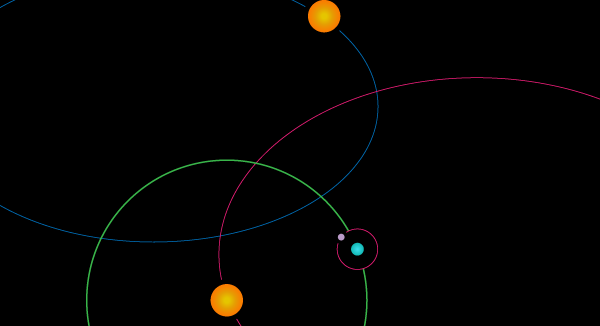 For much of the year, the planet would be "in between" the stars. Unfortunately, this means extreme temperature variations (including the planet probably being burnt to a crisp), but also in near-constant daylight. It's also probable that the "orbit" would be complex and irregular, and chances would be good of the planet actually getting flung out of the solar system altogether, becoming a rogue planet.

These s-type systems are quite common, but the sunrise pattern would only hold true for a small window of time (a few months) over a large timescale (many many years, until the stars' orbits around their barycentre and the planet's season aligned again).

Seasons would be pretty much the same as they are on Earth.

In fact, for most practical questions concerning P-type binary star systems, it's helpful to think of the two stars as a single mass whose center is the center of the solar system. All other things equal, the orbits, effective gravity, and radiation (light, heat) aren't significantly different from what we experience in our own solar system.

With S-type systems, it is of course more complicated. The orbital periods for the stars can vary widely, while the Earth-like years for the planet would result in relatively normal seasons most of the time, however things can get exotic in a hurry if the planet's orbit (nearly) intersects the non-bound star's orbit. At best, you'll see an extremely hot summer. At worst, the planet's orbit will be radically changed, or the planet will be thrown out of the system altogether, sending its inhabitants into the coldest winter on record...

Of course if one or both of the stars are significantly different (i.e., something off of the main sequence), that's where you can start to get some different effects without crazy orbital mechanics, but that's only because the color, temperature, radiation, mass, etc. would be different—nothing to do with it being part of a binary system. I'll talk about this a bit more in the next section.

How to make it work

You can have 2 stars, and you can have one rise 4 hours after the other. Just stick your planet in the L4 or L5 Lagrangian point of your binary star system. This is stable over large time-scales and puts the stars 60 apart, which gives you a 4 hour gap between sunrises (assuming a 24 hour day).

Those Lagrange points are only stable if your central star is at least 25 times more massive than the other one. It's going to be a lot brighter.

I think it could work (roughly) as long as we can cheat on the mass. First, use a binary system where your planet orbits a midsize, red dwarf star, which would supply some of your light (at well under 1 AU) while a hot star with maybe 1.5 solar masses orbits as a few AU (the two stars orbit around each other, while your planet orbits the red star). Assuming you aren't tidally locked to the red star, as you orbit each star would spend (up to) 12 hours from sunrise to sunset (though the exact times would vary by time of year). If you balance the orbits right, each star would appear at close to the same size.

For instance, consider the scenario (it's close, but there are better combinations):

You orbit a red dwarf star of mass 0.5 solar masses at a distance of 0.35 AU. You might or might not be tidally-locked at that distance, so we can just apply handwavium and say you aren't.

There is a hot F-type star with 1.5 solar masses at a distance of about 3.2 AU. That would be a yellow-white star.

You would get about almost exactly half of your heat/energy from each star (each would supply 1/2 solar radiance). This is because the hotter star is about 80 times as luminous as the red dwarf in absolute (bolometric) luminosity.

As far as stability, this may be a bit dicey (to improve it, move the planet closer to the red dwarf a bit, and the distant star further away). HOWEVER, a fast calculation shows that the radius of the Hill Sphere around the red dwarf (where the gravitational pull of both stars is balanced) is 1.2 AU and a popular rule of thumb is that orbits are stable inside of 1/3 of the Hill Sphere radius.

If we can cheat a bit we can have two stars of the same mass but different colors. Their size will differ, though!

Now, we also need a system containing a 1 solar mass star and the planet of interest. Other planets are irrelevant.

Apply lots of time to this system, wait for the 2 solar mass star to enter it's red giant phase. Now, they run into each other. The two 1 solar mass stars impact and merge into a single 2 solar mass star which will still be a main sequence star (this is one of the hypotheses for blue stragglers) Through some incredible luck the planet ends up in a suitable orbit around both stars.

Not the answer you're looking for? Browse other questions tagged planets space stars .

3
What are the required proportions of a moon that allow it to orbit around a planet?
4
Visibility of second star in S-type system

4
Seasons on a circumbinary planet
2
The view in a binary star system
8
I am designing a new exoplanet. Do these physical parameters seem plausible?
7
Radiation from binary star systems and how that would affect a planet orbiting both stars
1
Would lensing make stars in a binary system appear further apart at sunset?
4
Could two binary planets become habitable under these conditions?
4
In a Red Giant Binary System, How Far and How Wide Can the Habitable Zone Be?
4
How plausible is this planetary system with binary stars?
6
What would you need to have a planet orbiting two binary stars