Where would the Sun and Moon be within a flat Earth world?

Where would the Sun and Moon be on a flat Earth? Imagine a world similar to the flat domed depiction of the Earth with a Biblical Firmament all around it.

If you don't know what that is, let me explain:

A sphere is cut in half with the entire flat world in the middle of this globe. Straight above the people of this world is the Garden of the Sky Gods, while below the globe is the Great Deep. The sphere itself is supported by four pillars. The upper part of the sphere is the dome (atmosphere) and slightly above that is the firmament with the sun, moon, and stars. Underneath the flat ground is the rest of this half-sphere, the underground caverns.

There's one thing I can't quite get down though. I want my world to have a regular night and day system like ours, but is that possible? How would the sun and moon rotate around the globe to cause light and darkness to change?

In the very center of this world is a place called Naval City, it is the capital of this economy because it was where all life began. I want this city to have night and day as well, every place on this world has to change, right?

Here's the way I see it, if the Sun and Moon were just rotating around the land while above it, the center city wouldn't have a changing time system to begin with. Am I wrong or am I right?

How would the sun and moon orbit around a flat world to begin with? Should the center city be a pole?

I think with a flat world you need to be a little more creative with your sun and moon.
I would say there are a few different options;

What's wrong with Ptolemaic system? (beside the fact it's wrong in our universe, of course)

Just replace the spherical Earth with a flat one and You're done.

Other systems are possible (to invent), but this will give you the closest approximation to our sky.

The ancient Mesopotamian Epic of Gilgamesh is the oldest surviving written story. In it, Gilgamesh travels to the entrance of the tunnel where the sun goes to cross underground from west to east. It is guarded by scorpion people.

The scorpion man said, “No one is able
to cross the Twin Peaks, nor has anyone ever
entered the tunnel into which the sun
plunges when it sets and moves through the earth.
Inside the tunnel there is total darkness:
Deep is the darkness, with no light at all.”

The scorpion woman said, “This brave man,
driven by despair, his body frost chilled,
exhausted, and burnt by the desert sun-
Show him the way to Utnapishtim.

The scorpion man said, “Ever downward
through the deep darkness the tunnel leads.
All will be pitch black before and behind you,
all will be pitch black to either side.
You must run through the tunnel faster than the wind.
You have just 12 hours. If you don’t emerge
from the tunnel before the sun sets and enters,
you will find no refuge from its deadly fire.
Penetrate into the mountain steps,
may the Twin Peaks lead you safely to your goal,
may they safely take you to the edge of the world.

The gate to the tunnel lies here before you.
Go now in peace, and return in peace.” 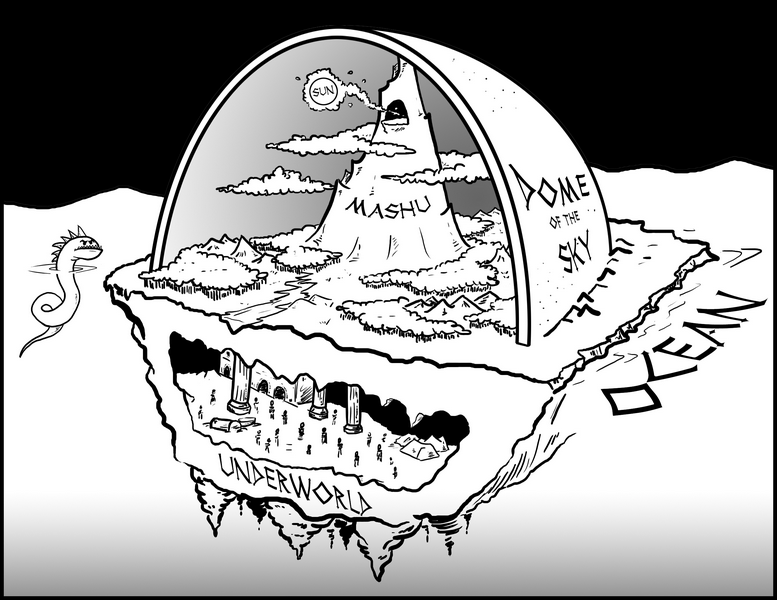 the tunnel would, of course, be at ground level. But otherwise pretty close?

Depending on the level of fantasy and seriousness you are going for the sun be a great furnace that the dwarves(gods, etc) ignite every day to continue their work maintaining the dome. It doesn't have to be a ball of gas at all. If the sky is a dome then maybe someone has to maintain it and the sun is a furnace and the moon the workshops or something that hides the workers from the world below. The gods do not want to show their hand at work after all.

The dome doesn't have to be made of glass. Unless someone can reach the edge of the world, which is probably guarded to prevent any humans from climbing up and disturbing the gods, no one would know.

Cleaning days they could pour water through the dome to clean the sun and cause clouds and rain. All those stars are the windows that gods use to watch their creation.

For such a world I would not use a ball of fire for the sun. It should be something created or carried so it doesn't have to follow the normal rules at all. Maybe they just move the sun around depending on where they are working so it seems to travel from horizon to horizon. Then they rotate the dome every night and start again in the morning. So the seasons are just that they are working closer to the ground on the dome so more of the world gets cold and experiences winter.

In such a world the rim would be deserts since the sun actually touches down there over the course of a year.

Actually, the moon could be the gods inspecting the dome every night to approve the work.

You will have to come up with a basic pantheon for who is doing all of this work and who takes care of it all. Even if you choose a different explanation for what the sun and the moon are knowing the gods involved will help a lot.

Not the answer you're looking for? Browse other questions tagged orbital-mechanics solar-system nonspherical-worlds or ask your own question.

8
The sun, moon, stars and planets of a flat world in the center of the universe
8
Infinite tube world
8
How do the tides work when the sun powers the moon to keep out evil?
8
Could I have an earth-like planet from which sun and moon would never be simultaneously visible?
6
Penumbra colors of a flat earth's sun-shades
4
Days and Seasons via Daily Eclipses in a Flat World
4
What colour would a flat world's sky be?
5
Sun-like sky objects in a flat world?