In a medieval world, how a melee soldier practically defend against a lightning bender?

In this story, the world is in peace, until the Lightning nation attacks. Because of the peaceful period before, this particular nation under the attack of the Lightning nation is able to learn about the creation of the lightning. The general idea of electricity is sufficiently known:

However, due to lack of other magic/bending techniques, this nation is left to their knowledge of metallurgy and electricity (and other knowledge) to handle the invading Lightning nation.

In this nation, they can produce small electricity using a waterwheel, through a mechanism they currently don't know - electromagnetism - (it just works!) to research electricity. There is no electrical device other than basic wires, so the research in this area is boring and particularly undeveloped. This can be reproduced easily, but they have no idea why this work.

This nation is particularly famous for the melee soldier: ranging from hand-to-hand martial artist, rogue-like dagger wielders, to knight in armor, and archery and other projectile-based is not developed very well, so they must depend on their melee soldiers.

The Lightning nation, confident in their lightning bending over soldiers without magic/bending ability, only sends lightning benders to invade them (with catapult and battering ram for sieging castles).

Lightning bending works by creating a low resistance channel of ionized air toward the targeted location (only air), then release the accumulated, all using fingers - Avatar-like. The power is only comparable to real lightning in 20 meter.

An average bolt of negative lightning carries an electric current of 30,000 amperes (30 kA), and transfers 15 coulombs of electric charge and 500 megajoules of energy.

All lightning bender soldier able to do this, with more experienced users capable of extending that range. The power of the bolt diminished exponentially with a maximal average range of 50 m. Using the ability is at-will and you can discharge from your 4 limbs, less than 1 second needed to release a bolt, and recharge cooldown varies from 3 seconds to 10 seconds for greater bolt.

How the attacked nation can prepare their melee soldier to defend against the lightning strikes?
I'm not asking about how can they win the war, or kill the enemy - might do that in their sleep by sending assassins.

Encasing the soldiers in Faraday cage obviously out of the question. I don't think carrying a metal rod for grounding is capable of protecting the user against a lightning, though I'm free to be proven wrong of this.

Please consider the medieval setting, their limited knowledge of electricity (no electrical device yet, only basic wires), and unavailability of magic/bending at their country. The answer also should be practical for a melee soldier. Cookie points if you can redirect this back to the enemy army.

According to the answer on this question: Metal Armour vs lightning strikes?, metal armor seems out of question.

This means that even inside a Faraday cage, if you are close enough to its walls, the arc flash will still injure you.

The math is done there if you are interested.

Ah, but how much grounding do you need? A thin wire will easily burn out, explode, and so on if you put too much current through it.

So how to make lighting rod fashion transition over into lightning rod armor?

First, we need to look at some lightning rods, as they regularly and reliably redirect lightning away from flammable wooden buildings. Lightningrodparts.com, perhaps unsurprisingly, has lightning rods. They are not large: they get as small as 3/8 of an inch (9.525 mm) thick which means there is less metal in a lightning rod than there is in a sword!

Second, we should note that a "Standard Concealed Through the Roof Lightning Rod," comes with a thin rubber sheath to protect the very flammable house from a very fire-inducing lightning bolt.

Third, we need to talk about armor. Did you know that people generally wear gambesons/aketons/padded jackets under armor? And that these are generally made from insulating materials?

The solution here ought to be obvious now: cover the joints with dense chain-mail or get wires/plates to attach to metal armor plates together at multiple points to allow the increased current to preferentially flow through the armor, not the person, and into the ground. Make sure the boot soles are also metal and that there is a layer of thick cloth between the soldiers and all their metal gear. The goal is to make the lighting go through the armor and not the person.

Thicker plates will conduct electricity better, but multiple smaller wires can come together to carry the same amount of current. This lightning-proof armor will likely not be over-cumbersome. Asbestos, which is very insulating and very anciently available, can be added to fibers to make heat resistant gambesons. This will lightning proof your solders as much as they can be.

Another alternative is to implement something like an electrically conductive pavise, a shield meant to be placed on the ground to grant cover. It is something that foot soldiers can shove into the ground and take cover behind as they see these lighting people gearing up to throw lightning... if they're anything like Avatar's fire-benders, this works.

<- This attack has a definite tell.

The shield solution more-or-less makes the shields planted into the ground a stand-alone lightning rod. You circumvent the arc-flash problem by increasing the distance from the lightning rod. The IEE 1584 standard is sensitive on the scale of millimeters- something easily achieved by planting a shield and taking a small step back.

People will be blinded be the flash of lightning. (Until auto-tinting goggles happen.)

People will be deafened by the boom of thunder. (Earplugs may be quickly developed.)

People may still suffer burns from intense heat going through their armor or shield. (Asbestos and other insulating materials can help with this.)

These armored solutions, however, will allow these people to talk about their wounds much later, and that's something.

Suppressing fire will be super helpful. Archers suppress the lightning people so the foot solders can get close and get to hacking. Some tactics may need to change, like looser formations to prevent side-flashes from lightning strikes.

Chainmail by itself (or full plate) should act as a faraday cage. As long as they touch the ground, I would imagine the electricity flows through the armor to the ground. Remember, the metal just has to be think enough to make "go through the metal, and not melt/vaporize the metal" is a viable altenative to "cook person".

You can look at the tesla coils using bands. And those are people who turn up the voltage, not create special ionized gas channels.

Once you scale the power levels to something which isn't The Hand of Zeus reaching out and touching you, platemail and chainmail become valid options for solving your problems. If you drop the power by 1000 fold, which brings the calorie output into the "heavy exertion" category, each lightning bender has the power of a good sized MIG welder.

With the strength of the lightning available there's not really any effective, portable way to stop or redirect lightning. So there are two practical options.

The first and easiest is just not turning up. Lightning bending has changed the prevailing tactics, melee is no longer effective on an open battlefield so it's better to give them all crossbows and hit the benders from range. If you absolutely have to have melee forces you're starting to look at using the melee forces only for protecting the archers and not for attacking.

The second is stealth. The soldiers need to get as close as possible without being seen, forests would be perfectly for this. Then they can charge in before the benders can kill too many.

I think (lightning rod) spears should work - and the fit well to a melee based military.

Imagine a lightning rod metal core, which at the tip is made into a spear head. The grip (or better everything except for tip and base) has to be covered in insulating material, I guess leather or something like that. By planting the base of the spear on the ground and holding the spear head in the direction of the enemy you can sort of 'catch' the lightning bolts - the longer the spear the better it works. By advancing in alternating lines you can even move towards the enemy, while still being 'grounded' at the tip of the front line.

We need to find something that keeps the suspension of disbelief of readers willling to accept lighting mages and people fighting them hand-to-hand.

And people did believe in this: 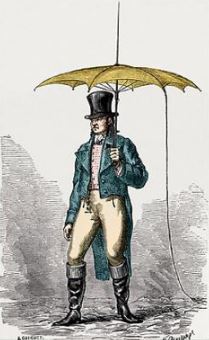 "Umbrellas" at the point of wooden spears, with long weighted chains to act as grounding, hanging near the "catcher" part.

Like Macedonian sarisas defending agains archers, some of the spears point frontwards and the rear ones go up in progressive angle up to 90º. If the front spear breaks after catching a lightning, the fighter on the back passes his spear to upfront, in a chain.

Since your phallanx would have too many conductive points, perhaps they would organize themselves in porcupine formations instead of attacking squares.

If the benders themselves are not invulnerable to their lightning, the soldiers can create water or sticky conducting fluid bombs launched by catapults so the benders are drenched as well and can electrocute their allies. On that note, napalm or Greek fire in the old world, works too.

There can also be large mobile lightning rods pushed by insulated soldiers or engineers while personal lightning rods attached to backpacks with grounded wires may also be crafted since this is in a fantasy setting and they can wear them similar to Japanese flag bearers (at the back).

Maybe they can also use large bells as a sort of directed sonic weapon to disorient and attack the benders? Really large bells like as in catapult scale.

Not the answer you're looking for? Browse other questions tagged magic medieval .

6
How realistic/practical are my ninjas?
18
How does a modern military defend against a guerrilla Army of wizards
3
What happens if two lightning bolts collide?
28
How could a lightning magic user fly?
10
Diving into water to escape lightning attacks
7
Lightning strikes a medieval army. What happens?
31
Why wouldn't magically gifted individuals be forcibly conscripted?
8
Armour designed against magic
0
Effectiveness of lightning weapon on a medieval sea