So my question is what could be some interesting logic or thoughts behind having a lightning magic user being able to fly?

To quote another user who wanted to build a lightning rifle... (Lightning Rifle)

"Typical lightning requires a large difference in electrical potential, and something that prevents equalizing this difference. In lightning storms the ground and clouds (in normal cloud-to-ground scenarios) the "polarities" of our difference in charge. The air itself insulates the exchange of electricity to balance out these charges.

Lightning produces "leaders" prior to the actual flash of electrical discharge we see. Leaders are Channels of ionized air that effectively seek out shortest path (and produce the zig-zag pattern of the bolts)."

The idea I am toying around with is that the lightning casters will do exactly this, generate a massive charge around themselves and a corresponding opposite charge around their target. That said, I'm curious if there could be any potential for this to eventually lead itself to some form of flight.

Unlike turbine-powered planes, the aircraft does not depend on fossil fuels to fly. And unlike propeller-driven drones, the new design is completely silent.

“This is the first-ever sustained flight of a plane with no moving parts in the propulsion system,” says Steven Barrett, associate professor of aeronautics and astronautics at MIT. “This has potentially opened new and unexplored possibilities for aircraft which are quieter, mechanically simpler, and do not emit combustion emissions.”

The team’s final design resembles a large, lightweight glider. The aircraft, which weighs about 5 pounds and has a 5-meter wingspan, carries an array of thin wires, which are strung like horizontal fencing along and beneath the front end of the plane’s wing. The wires act as positively charged electrodes, while similarly arranged thicker wires, running along the back end of the plane’s wing, serve as negative electrodes.

The fuselage of the plane holds a stack of lithium-polymer batteries. Barrett's ion plane team included members of Professor David Perreault’s Power Electronics Research Group in the Research Laboratory of Electronics, who designed a power supply that would convert the batteries’ output to a sufficiently high voltage to propel the plane. In this way, the batteries supply electricity at 40,000 volts to positively charge the wires via a lightweight power converter.

As the newly formed cloud of ions flows toward the negatively charged wires, each ion collides millions of times with other air molecules, creating a thrust that propels the aircraft forward.

This was the simplest possible plane we could design that could prove the concept that an ion plane could fly,” Barrett says. “It’s still some way away from an aircraft that could perform a useful mission. It needs to be more efficient, fly for longer, and fly outside.”

It's the newest thing, and since your caster is a giant electricity generator, they should be able to do this. Either with their fingers to look really talented, or with specially designed suits.

This has a rather unique and terrifying benefit that it is completely silent, so your lightning mage is also a perfectly silent flying assassin, able to go anywhere and hurl bolts on unsuspecting foes.

I think Trevor's idea of ion flight is much more reasonable and in line with what you would want to do, so that's probably the best approach.

But for the sake of exploring options, they could also potentially ride the shockwaves of their own lightning. When lightning strikes it heats up the air significantly (up to 30 000 K), and this air quickly wants to expand due to the nature of gasses and the reaction to heat.

This produces a large pressure blast, which, if carefully positioned should be able to generate a pressure shockwave that is able to push them in the desired direction. It would be a tough balance of being far enough away to not injure; but close enough to still be within the range of the wave before it breaks into thunder. You may need to be wearing protective equipment, or handwave it away. Considering they are able to generate lightning in general, it might be best to assume the pressure doesn't harm them.

You could probably make it a lot better by wearing some sort of glider or wings to increase the lift from the pressure wave. I would think someone dedicated to this may even build some sort of framework that goes behind them that has two surfaces which could build opposing charge; with a lift generating device placed directly in front like a sail. You could essentially make a heat engine that uses ambient air and is worn like a backpack.

The benefit of this is that you would look like an absolute badass riding a trail of successive lightning bolts to your destination. You would be practically riding the thunder (if you ignore the semantics about when the pressure wave actually becomes "thunder").

This option is essentially the opposite direction from Trevor's option. The ion flight would allow a stealthy controlled approach. Riding the thunder would definitely make an entrance, which may or may not be beneficial depending on if you wanted to intimidate or not.

Not sure how to summary a video.

Electrostatic levitation is the process of using an electric field to levitate a charged object and counteract the effects of gravity. It was used, for instance, in Robert Millikan's oil drop experiment and is used to suspend the gyroscopes in Gravity Probe B during launch.

Use them to make plasma thrusters!

If they can bend their lightning bolts around into rings, and exercise great control, then the more skilled of the casters could use them as make shift plasma thrusters, only instead of expelling ions of xenon fuel, they can use additional bolts to form plasma and blast it through the ring via magnetic fields. After all a strong enough arc will rip the electrons off of atoms to form plasma, it could even be used to melt/weld things ( arc welders and arc furnaces? )

The end result being a bright ring spewing out fire, a makeshift weapon, as well as expert casters being able to fly as far as the edge of space, or make multiple appear to lift heavy objects

The bonus is, there's sort of real world precedent, this is equivalent to a magnetoplasma rocket, such as VASIMIR, except instead of magnets you have rings of electricity/lightning 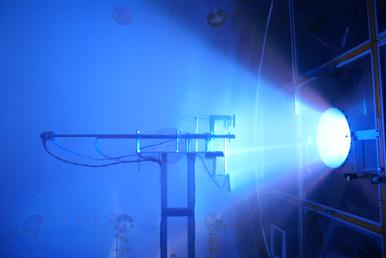 11
Breathing lightning
10
Magically knock someone down and pin them using Science
3
What happens if two lightning bolts collide?
6
In a medieval world, how a melee soldier practically defend against a lightning bender?
1
Building a drone for gas giant flight: Lightning considerations
6
How would a black lightning storm work?
2
Horizontal Lightning Bolt