So, I'm writing a fun bit of fantasy fiction which involves a magic fight taking place on a stone/tile roof. The setup is that two characters are getting pinned down by superior magical fire from a higher vantage point and are in danger of getting overwhelmed. So far it's been fun and enjoyable to write, but I've hit a snag and I can't figure out what should happen next.

I wrote that they solve this by diving into a channel of water on the roof (the water channel is part of a system of channels that distributes water around the buildings, since this is a magic/medieval type setting, that's pretty cool, and the water is brought up magically). The water protects them and they get away into the next part of the fight.

I'm pretty sure that it helps against fire, and would dampen stone fragments and icicles and the like. However, one of the spells they are being hit with involves lightning. I have a physics background and my first thought was "water is more conductive, so Faraday cage effect", meaning the water provides a better path around then the human bodies and so nothing happens.

On the other hand, landing anything electrical into a bath is a good way to die and the human body is mainly water. And now I'm not sure and I'm doubting myself. So, any help would be welcomed please.

Thanks in advance for your help!

You need to offer the current something more conductive than the human body, and a path to ground. In fresh water, our salty blood is more conductive. But on a rooftop water channel you can offer the lightning its favorite thing. 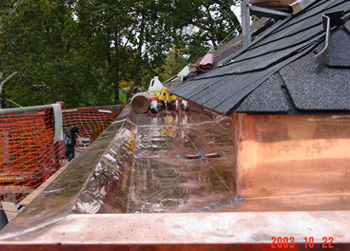 The roof channels are lined with copper. This makes great sense because copper inhibits algae and microbial growth and will prevent the gutter from getting clogged with this stuff - the image is a rooftop gutter lined with copper than looks broad enough for a svelte action hero to shelter in.

Copper is a phenomenal conductor of electricity. Lightning strikes coming near the characters will go to ground along the copper water channels and leave them unharmed. One of your characters might get the idea because she notices a lot of the lightning seems to be hitting the channel. Your other character does not see why they should go where the lightning is going, but he knows she is usually right and so he grits his teeth and takes it on faith.

29
Lightning Rifle
4
Can prehistoric people perform magic?
0
Magic of the Three Gods (Fire, Lightning, Ice)
6
In a medieval world, how a melee soldier practically defend against a lightning bender?
28
How could a lightning magic user fly?
6
Most energy efficent attacks in a physics-bound magic system
7
How to use heat magic to summon lightning?
4
Can electricity magic give someone the power to make it rain?
4
Explaining Electricity Manipulation as an extension of Air Magic