Asteroid making a hole through the crust

How plausible would it be for an asteroid impact to create a hole through the Earth's crust into the mantle? What sort of traces would such an impact leave behind? Would it be survivable by at least some animals and plants?

Let's assume that we are dealing with Earth, or the third planet in a solar system roughly identical to our own, although the specific asteroid responsible doesn't have to really exist. Let's also assume the asteroid itself ends up embedded in the mantle, none of it remains on the crust.

So 16 Psyche would certainly punch into the mantle if it hit Earth, and an asteroid of metallic composition, more than twice the diameter of the Chicxulub impactor would reach also the mantle. Surely this is a rare event, but its not as if it hasn't happened before...

As for survival....no. We'd lose half our atmosphere, a good portion of our oceans, and much of the crust would be liquified. Not a good day to be alive.

It is not plausible

If you’re like me, when you first saw this question, you might’ve imagined the puck leaving a cartoon-style hockey-puck-shaped hole.

But that’s because our intuitions are shaky about how materials react at very high speeds. Instead, a different mental picture might be more accurate: Imagine throwing a ripe tomato — as hard as you can — at a cake. 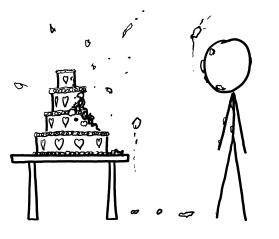 The thing is that even rocks and metals behave like soft putty when impacting things at that speed, especially if the target is not yielding.

Beautiful example with metal on metal.

So your asteroid will not punch through the crust and end up in the mantle. It will splat against the crust.

Assuming a metal asteroid, let us say one that has twice the density of rock, then if could dip down under the surface. But the asteroid would have to be huge in impact terms, at least 10 kilometers, if it is to break through 10 km of crust. An impactor of that size will make for one hell of a bang.

For example: The Chicxulub impactor is estimated to have been about 10 km.That left a lasting impression...

Also the asteroid will break apart into little pieces.

No way. The mass that's in the way of the asteroid and gets compressed, vaporized and moved to the sites as a shockwave is too much. That's what killed the dinosaurs. Yours would need much more energy to get through there. Even if the asteroid was of a super heavy not yet discovered and somehow stable element and therefore super small for its mass, the energy needed to shoot through so much earth would be really bad.

Crust is much thinner under the ocean. Density of water is low compared to rock.

Some of the meteors recovered are close to pure nickel iron with a density of about 8,000/kg/m3

So a 10 km diameter ocean strike, not on the continental shelves may well get through the crust.

There are the usual variables, but most discussions forget the major question of hardness of the materials. At high speeds, items of approximately the same hardness act like equal liquids. You always get a circular crater, usually shallow, and not steep enough to penetrate. The total energy involved may cause secondary fractures along faults as the earth 'rings like a bell'. Where you hit in relationship to the edges of plates and existing pressures matters.

Now drop an intentional asteroid of tempered steel. It makes a much steeper crater and is more likely to smash through. Then what? A hole doesn't make the whole plate just sink because the plate is also held at the edges and magma is viscous. A mass driver using hard bullets might be able to stitch out a plate's edges and drop it, or it might not.

You should probably look at Lucifer's Hammer where two different earth destroying methods are used: drop a big bomb through the crust and plant small bombs along the tectonic boundaries.

Not the answer you're looking for? Browse other questions tagged planets geology extinction asteroids or ask your own question.

16
Asteroid impact. How big does it have to be to globally affect plate tectonics?
47
What would be best way to re-melt Mars' mantle and core to revive its magnetosphere
5
Asteroid flux or: How to make a planet perfect for mining
7
Making a Counter-Earth
19
What's the quickest way to add oceans to a planet?
8
Effects and feasability of a modern-day Olympus and Hephestus
4
Is an earthlike planet with ammonia oceans even plausible?
3
How Habitable are these Planets?
1
Would evolution come to a standstill on an ancient planet with (near-)zero radiation?