Asteroid impact. How big does it have to be to globally affect plate tectonics?

I want to know about the plausibility and required parameters of the following scenario:

Take an Earth-like planet, about the same size, composition and gravity. It has no plate tectonics to speak of. It’s a single shallow world-sea with a huge amount of small, low-elevation islands (whatever elevation there once was is mostly eroded over the ages). The planetary axis is nearly vertical and so there are no seasons to speak of.

The fact that Earth's crust is broken up into plates isn't what drives plate tectonics. The driver is the heat of the Earth's core causing convection cycles in the mantle*, and this movement drags the thin, fragile crust with it.

A lack of tectonics means the planet has cooled below the point where large-scale movement in the mantle is possible. In order to re-start them, you need to heat the planet back up, which means a massive, planet-shattering blow. If you want to keep things moving longer than a few tens of thousands of years, you'll need to add a heat source, which on a geologic scale, means the asteroid needs to be considerably more radioactive than the planet being hit.

*or, if you prefer the fringe view, the heat of the Earth's core causes isolated plumes of moving material in the mantle.

I'm going to talk about Earth below, but since you say "an Earth-like planet", consider that just an space-saving measure.

Take an Earth-like planet, about the same size, composition and gravity.

Well, as it's said in the movie, oh shit - there goes the planet.

An impact crater is:

an approximately circular depression in the surface of a planet, moon or other solid body in the Solar System, formed by the hypervelocity impact of a smaller body with the surface.

The "approximately circular" part means that by definition, for an impact crater to form you need a more or less head-on collision. You can't simply "scrape" the target body, even if that counts as an impact, because that will create a very much elongenated shear rather than a circular depression which thus is not an impact crater but rather something else. This would appear to rule out an event similar to that described by the Moon's origin Giant Impact hypothesis, since that body didn't hit the Earth directly but rather scraped along the surface. Borrowing from the former linked page:

Computer simulations show a need for a glancing blow, which causes a portion of the collider to form a long arm of material that then shears off. The asymmetrical shape of the Earth following the collision then causes this material to settle into an orbit around the main mass. The energy involved in this collision is impressive: trillions of tons of material would have been vaporized and melted. In parts of the Earth the temperature would have risen to 10,000 °C (18,000 °F).

In our solar system as of today, a reasonable point of comparison to what you are proposing would appear to be Saturn's moon Mimas. Mimas has a diameter of just under 400 km and an impact crater (Herschel) 130-140 km across. Quoting the Wikipedia page on Mimas:

If there were a crater of an equivalent scale on Earth it would be over 4,000 kilometres (2,500 mi) in diameter, wider than Australia.

[The Herschel crater] is so large that astronomers have expressed surprise that Mimas was not shattered by the impact that caused it. 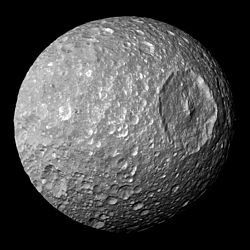 An impact on Earth by such an asteroid, under that assumption, would result in a crater a thousand kilometers across. A more reasonable guess is probably a factor of ten times, which means that if the Earth survived, the crater would be on the order of 5000 km across.

The diameter of the Earth is a little less than 13000 km.

Under those assumptions, the crater would represent more than a third of Earth's diameter, quite comparable to Herschel in comparison to Mimas. If the size amplification of the crater compared to the impact body is even larger, the crater caused by a 500 km body impact becomes larger than that. I think it stands to reason that a crater around a third of the diameter of the body it appears on is as large as it can become, based on the fact that to my knowledge, we are not aware of any larger craters anywhere in the solar system.

If the Earth would survive such an impact, I imagine that scientists would be equally surprised as they are about the Herschel crater. (And of course, such an impact would wreak complete havoc with the environment, but you are asking about plate tectonics.) Or said in another way: I doubt the planet would survive the impact, so plate tectonics don't enter into the picture.

I think you're in the realms of quite possible. One thing to note is if your planet has formed one solid plate, volcanoes are likely the number one terrain feature on your planet (think Olypmus Mons on Mars). Your planet will need to release energy and with one shell this is going to create some rather large volcanoes.

(the following is my opinion)

To form plates like Earth has, this massive impact is almost a necessity. You need an impact force great enough to tear the plates apart and leave giant holes in the crust for these plates to being shifting towards. In Earths case, the impact was large enough to rip out a piece of the planet from which the moon formed. It's worth pointing out that this impact was early in earths formation when it was significantly 'softer' (IE, near molten crust).

The result of this impact is Pangaea. One large landmass on the opposite side from the initial strike...the other being an impact crater that becomes the deepest rifts of our Earth's ocean. At this point the Pangaea begins drifting apart. Choice is yours...young in this history, the earths landmass is still quite a bit together. Advancing several hundreds of millions of years starts to see these plates drift apart and become continents in their own right. The older you make the planet, the further these continents will have had to drift. Earth is several billion years past that impact now and in a few more billion, North America will once again be a part of Asia (you're making a snap shot of this world at a point in time, so you can choose how far along the path this snapshot comes from).

With your initial impact here...yes, you are going to have the 'plates' literally ripped apart and along those 'rip' lines will ooze lava as you suggest.

Be aware that this impact strike is nothing less than a total extinction event...only life in it's most primitive state can survive and it will be many millions of years before this life can advance to the point of intelligence.

As far as size...remember when it comes to asteroid impact, the density plays a much larger role than the width in KM will. A much denser iron like object won't need to be as large in size as a lighter one composed of rock or ice. Outside of that, I'm really not sure how big this impact will have to be, though I would suggest that to break plates on the other side, this collision will split the planet up a bit and potentially create moons.

added: tilt is entirely expected from an impact like this...even a 'wobble'. You can even play with the rotation of the planet if you'd like...and impact is the leading theory as to why Venus spins extremely slowly and in the opposite direction of the majority of the planets in the solar system.

I think we've established that this monstrous object is going to have to be pretty darn big. You suggested that it could be 500 kilometers in diameter; let's do the calculations to figure out just what the effects would be.

From Wikipedia, the median velocity of an oncoming object hitting Earth is about 22.5 km/s. From here, we can assume hat the asteroid (because this thing is going to have to be big) has a density of about 2 grams per cubic centimeter. Let's also say that this thing hits the Earth perpendicularly - i.e. it is a direct hit. We know that the plates are about 100 kilometers thick; therefore, we need the crater to be that deep if we want to throw everything into total chaos.

Using this handy-dandy calculator, we find that an impact with those parameters would create a crater 529 kilometers deep and 2,115 kilometers wide. Now that is what I call big. Earth's average radius is about 6,370 kilometers, so while this might not split the planet in two, it would give it a devastating blow.

We can adjust the values of the body to accommodate the results you want. If the crater will be about 100 km deep, we only need an asteroid 80 km wide, creating a crater with a diameter of about 407 km. The material ejected by the impact would be spread out over 874 kilometers, creating a sizable dent in a continent.

That's all just accounting for the crater. I suspect you would need a larger asteroid to do the kind of geological damage you're suggesting. But an asteroid even only 80 km wide would most likely throw the Earth into an impact winter longer than it has ever seen before. The object that killed the dinosaurs was probably only about 10 km in diameter. I'm a bit scared about what could happen if an asteroid 80 km wide hit Earth. Most likely, as you hypothesized, all life would be wiped away.

There is a crater large enough to support the impact theory. At the North Pole. My contention is not plate tectonics which is obviously caused from the interior of planet Earth's core. My contention is the energies involve currently at the core and the size of the impactor.
Let's say in the early solar system there were a lot of smaller bodies of denser elements from leftover supernova from a nearby solar system. The heaviest of these elements, gold, silver, iron, platinum and radioactive elements produced a body - Theia. The impactor crashed into the proto-earth at the current pole location tilting the earth to its current position and burying itself deep in the Earth at its core. The rebound energies spit out enough material to make the moon and create a energized Earth core.

Not the answer you're looking for? Browse other questions tagged reality-check geology asteroids tectonics or ask your own question.

3
how would you survive an asteroid impact?
7
Barycentric influence on plate tectonics
3
How could a planet have plate tectonics but zero or weak earthquakes?
8
Is there anything wrong with my plate tectonics map?
2
High-Altitude Asteroid Impact
4
How Would Plate Tectonics on an Inverted World Work?
7
How much surface water do I need for plate-tectonics on a planet?
6
What is the crust of a habitable planet with Io-like heat-pipe tectonics made of?