How big of a tidal wave could 2 binary planets create

So I'm working on a story based on a binary system involving two Earth sized, Earth like worlds with very eccentric orbits. In the story, one of the major coastal cities is protected by a massive retractable seawall to protect it from a titanic tidal wave (known as the Leviathan) which occurs as the two worlds swing past each other at periapsis. But after a terror attack disables the seawall from deploying, the Leviathan literally wipes away any trace that the city was there; carrying away what ever debris it made and leaving only the concrete foundations and empty streets in its wake.

If you need details about the orbit, the two planets are roughly the diameter of the Moon's orbit apart at apoapsis, and only about 20,000 km apart at periapsis. One planet, named Horizon is 93% the Earth's diameter, and the other is 89%; with both having roughly the same density as the Earth. So, could the Leviathan exist; and if it did, how big would such a tidal wave be?

First thing I thought to do was to work out the orbital period. That is simple enough given Kepler's laws, and it comes to just over 9 Earth days.

Then I found a neat calculator for the magnitude of the Tidal force over the planets: http://keisan.casio.com/exec/system/1360312100

Putting in your planets' data, with an eccentricity of 0.9 gives a tidal force at periapsis of about $2\times10^{24}$, or more than 10000 times greater that the force at apoapsis.

So it looks like you're going to get some big waves.

Gravity from a planet that is 20000km away is pretty strong, about 1/10 of surface gravity. That could have some pretty major effects, when you consider that lunar gravity is only about one nine-millionth of the Earth's gravity at the earth's surface.

The tidal bulge on Earth is about 0.3m (that's how big the tides would be if there were no land to focus them. We can work this out using

where $a$ is the acceleration due to gravity, and $r$ is the radius. (see http://mb-soft.com/public/tides.html) The acceleration due to gravity as the second planet passes overhead will decrease from about 10m/s/s to 9 m/s/s, so the left fraction is about 1.1 The radius of the planet must increase by 1.05 due to the tide. If the planet has a radius 6000km the tidal radius is 300km larger......

What does this mean? There won't be enough water to keep the planets in an equilibrium at periapsis, therefore the rocks of the planet will be strongly deformed, and heated, probably melting the crust, perhaps causing the planets to start to rip each other apart.

You can have a big tide, but you don't need the planets to approach each other so close.

You can make the rise as large as you need via geographic considerations, and not depend on the rough bulge height. Aswith our own planet, with continants in the way we don’t have a raised bulge that follows the moon as the planet turns. We have gyers in each basin that sloshes around and is pumped by the tidal force if the frequency matches.

Meanwhile, a bore of rising water can be funneled through a canyon. A desirable protected harbor may be at the end of such a high-walled canyon, as inspired by Pearl Harbor 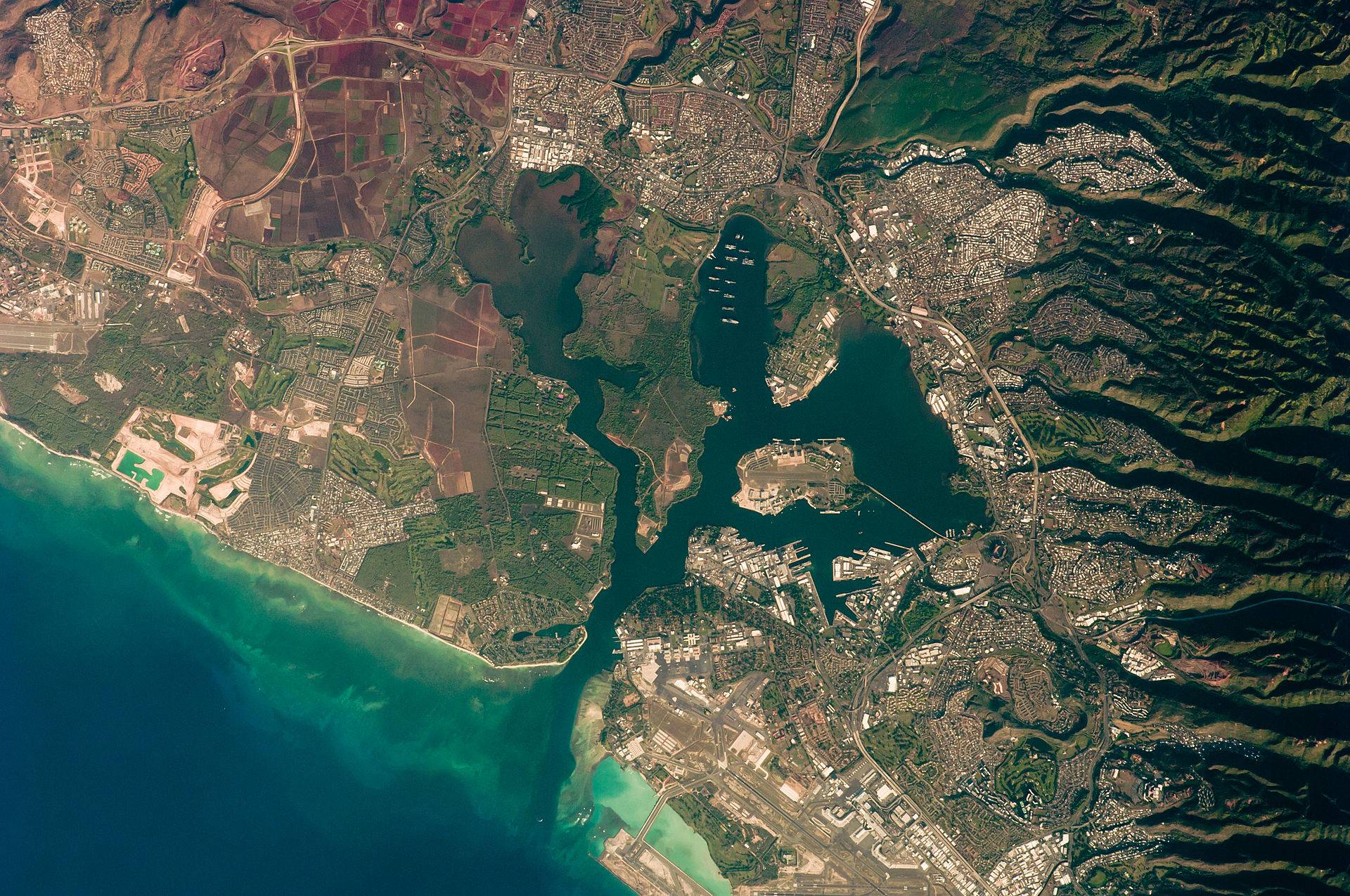 This also gives you some flexibility. Instead of the tidal wave occuring every few days† with the approach of the worlds, the effect can vary with the exact timing of the approach and the time of day and the position of the gyre. It only sends a bore angled to go down the throat, with various strengths, on rare alignments of all the factors.

So you may have a bore, say, every 24th pass, or every 6 months; but some are modest and occasionally more severe. (The sun affects the tides too, offering another slower factor; in addition to just needing more exact timing).

Note † : same distance as moon, but nearly double the mass. See here and back of the envelope calculation sets all values to 1 and sum of mass changes from 1 to 2; so period changes from 1 to ¼ or about a week.

Not the answer you're looking for? Browse other questions tagged gravity orbital-mechanics sea or ask your own question.

7
Tides on a double planet

12
Could planets switch orbits like Janus?
5
Could Two Planets Form A Binary System?
4
Could a binary planet system have two non-tidally-locked Earth-like planets?
22
Realistic sky of an Earth-like moon orbiting a gas giant (length of day and size of celestial bodies)
2
Binary Stars with planets in P-Type orbits
2
Would the following hypothetical planets in the 61 Cygni binary star system have stable orbits?
8
How much artificial gravity could create a black hole?
3
Binary planets that are not tidally locked
3
Could co-orbital planets also be double planets?