How can a constant sand storm be explained?

I have an idea that involves an extreme desert with a constant sand storm. There is water and forests near the area. It is an inhabited land. Humans live in this desert. Will anything else in the world realistically be effected?

The problem with a "perpetual" storm is that it will eventually blow all the sand away. You either need:

a) Rain clouds can't make it over the mountains

b) The sand can't blow out over the mountains either

Yes, it's possible. But your desert needs to be large. One possible way of explaining the replenishment of sand is to use the Arabian desert example.

In the fall, the Suhoor winds will blow one way (East, coating Qatar, eastern Saudi, and Abu Dhabi with sand), and then the Shamal will blow west in the spring, blowing sticky moist (Arabian Gulf humidity) sand toward western Saudi.

The problem with that scenario is that we'd have sandstorms in the spring and fall, but not in the between months. So what you'd need to do is have a desert in a more temperate latitude, that is large, and with small seas or large lakes on its periphery. It is very plausible to be bounded on one side with a forest & water.

Like Andrei said, it would be helpful to have mountains for both those reasons, although not necessary depending on your world (e.g.- the Arabian peninsula). Vast stretches of land can dissipate your rainfall as well.

Be careful, though, sandstorms are rarely like what you see in movies (if ever). They look frightening on approach, but once you're in them, it's just very hazy, with extremely limited visibility.

Also, be careful, it's hard to live in a sandstorm that lasts a week, not to mention what you're suggesting. Many resources will have to be brought in to your people, as crops will struggle. For water, you could have to have a fossil aquifer with wells.

(Photo courtesy Reuters; but this is what it looks like in a real sand storm) 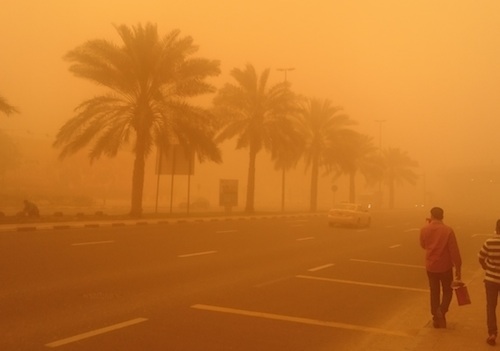 Make it a sand hurricane.

Have a massive storm that is fueled by the jet stream flowing into an area and spinning perpetually, having nowhere to go. Keep the sand trapped in this area, spinning with the (mostly) trapped wind.

Not the answer you're looking for? Browse other questions tagged humans deserts or ask your own question.

8
Desert City - agriculture and other specifics
18
Are there any big cats that can survive in a primarily desert area?
4
Would a tunnel in sand collapse?
6
What could cause the desert?
21
What would cause a region of land to become barren over several decades?
7
Natural uncovering of desert ruins
30
How can glass marbles naturally occur in a desert?