Would a tunnel in sand collapse?

Region 1, where the first city is, has a river, lakes both isolated and non isolated, a cave, a mountain range, forests, and grasslands.

Region 2 is similar but there are fewer forests and the lake there is a crater lake. There once was a huge mountain there but a significant part of it got knocked off by an asteroid and this lake is what is left of it.

Region 3 is swamp throughout.

Anyway, there are 2 biomes where the people that live underground would have to dig through sand. 1 of those is beach at the coastline or in very rare cases, inland. The other one is a hot, sandy, desert.

In both cases, there is a problem, sand is so fine it would most likely collapse if a humanoid tried to dig a tunnel in the sand. But then again, there are quite a few creatures that dig holes in the sand in both of these biomes.

An example of a beach creature that digs a tunnel in the sand is the fiddler crab: 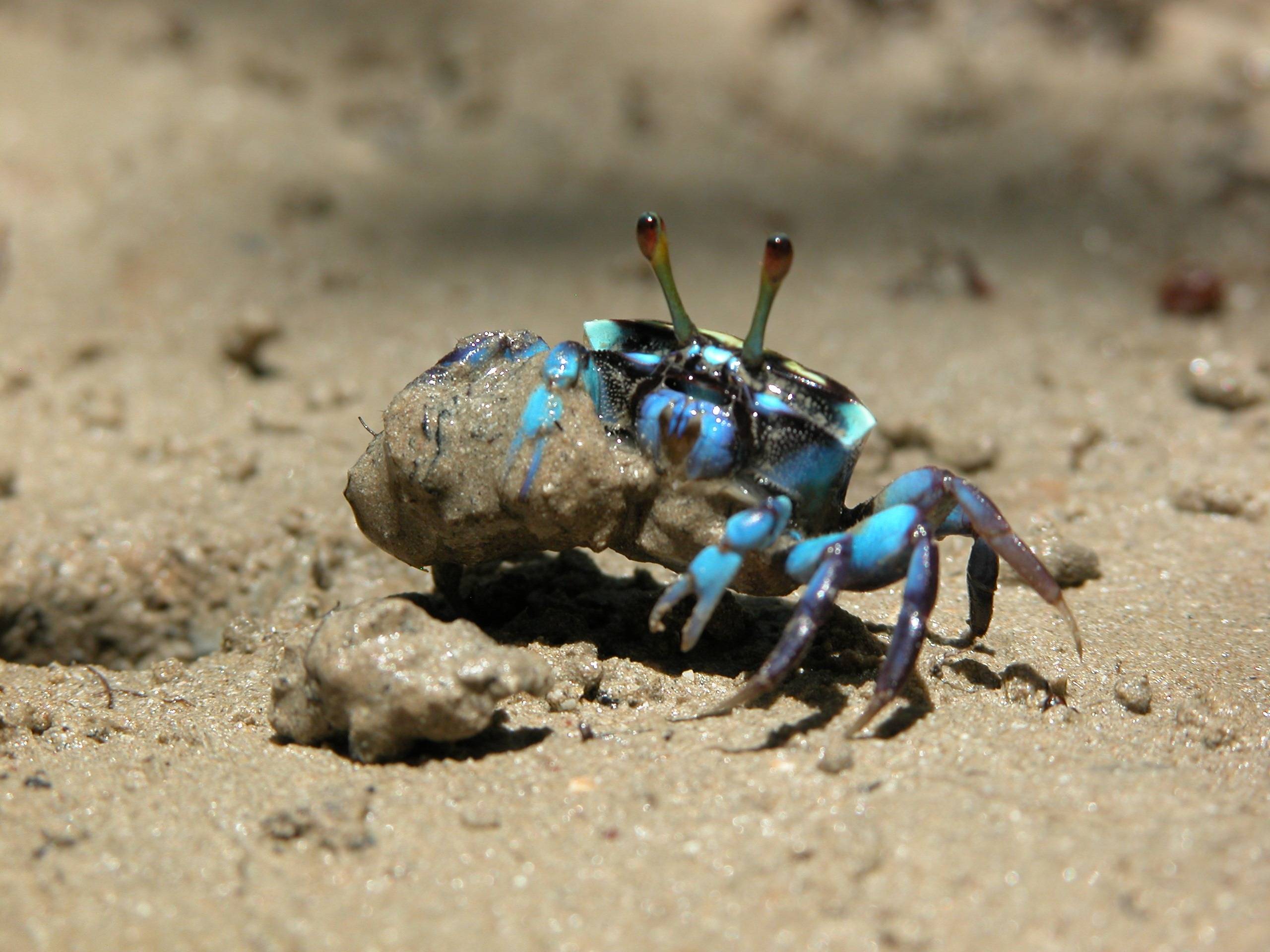 And quite a few desert creatures dig tunnels in the sand too. An example of this is the Gila monster: 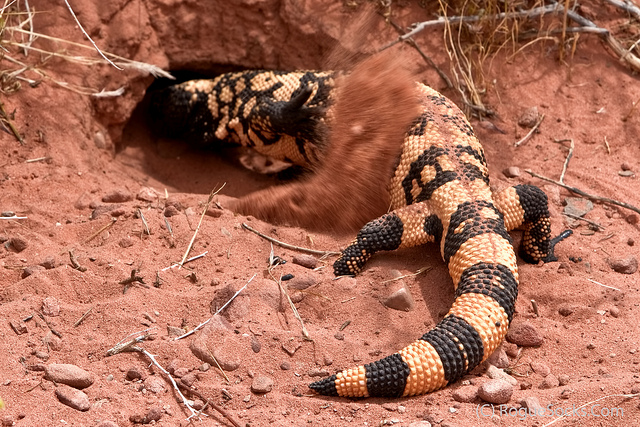 But does this mean that sand wouldn't collapse?

Because here is what I think would happen. At first digging down goes really well but then the humanoid starts to go in directions other than down and what happens? As these more horizontal tunnels are dug, the sand up above puts so much weight on the tunnel that it collapses and the humanoid, quite literally, aspirates the sand as he/she digs back up to the surface. A lot of sneezing and coughing and a desperate need for water results from all the sand the humanoid gets in its nose, throat, and lungs. While dust will just give a person aspiration pneumonia and/or sneezing without a scratchy throat, sand would give the humanoid the same thing but with a scratchy throat.

That is not good. Sand is so fine and so vulnerable to collapse. How would a humanoid dig tunnels through the sand without the sand collapsing on itself? Wet sand probably would not cut it. In fact, at just the right ratio, the wet sand becomes quicksand which itself has its dangers since you can get stuck in it.

So they would have to use something other than sand to keep the tunnels from collapsing. The only thing I can think of them doing here is putting rocks all around the tunnels and sticking them together with mud or something that wont crumble into fine pieces as soon as it dries(which I think wet sand would do).

They are at stone age level technology. This means that they build everything from hunting weapons to homes and everything in between without using metal. The closest they have to metal is stone.

Is there anything else they could do to keep tunnels in sand from collapsing?

You can't build a tunnel in sand

The fiddler crab's tunnel does collapse around him. When the crab is in his hole, the wet sand at the mouth collapses and hides the hole. This is by design to keep predators away. Have you ever seen bubbles coming up through wet sand at the beach? That means there is a crab or clam or something hiding in the sand, who has allowed his tunnel to collapse.

The Gila monster is not digging in sand. Sure the top surfaces are sandy, but you can see some grass growing there. That grass must have roots, and those roots can't extract nutrients from pure sand. There must be more loamy soil down there, stabilized by grass roots. Into this mix, the Gila monster can dig.

No one can build a tunnel in the sand without it collapsing.

The tunnelers could make a form of paper mache with wood pulp and flour, which might successfully line a tunnel and not collapse. Paper mache can be very strong, and arches can support a lot of weight. I am not sure how they'd actually dig through loose sand though.

Sand is such a loose concept, covering a range of minerals.

The Sahara Desert has fine sand. Outside of climate change (snow!), it's really dry and really hot and really loose. It stays formless sand in which you cannot dig.

Sandstone, on the other extreme, formed into a sedimentary rock and can store a lot of water (or oil). The sand needs to start with some quartz and needs compression. You can tunnel in sandstone fairly easily, though you cannot have really have spans without support over about 7 meters. (See your favorite book on Mining or Ground Engineering).

In between, you are looking for how wide a span can be self supporting. Water, organic matter, and more make a difference. One classic measurements include "how steep can I make my sand pile before it collapses under its own weight"? And my favorite question, "if you have nano-machines assemble your human sized sand castle so that each grain is stacked like a brick, does it instantly collapse when someone steps inside?"

It's easy to have sandstone beneath a surface of sand, for your story. If you seek accuracy, you will walk into valley of Materials Engineering from which there is no escape. You have been warned.

As a frame challenge, your two examples are not actually examples of what you are asking for.

For the crabs, they don't actually create "burrows". They just burrow down into the sand, letting the sand cover and hide them. They generally don't have permanent tunnels or chambers.

For the Gila Monster, they don't live in tunnels in the sand. They dig into the clay/dirt that underlays any thin layer of sand or dust on the surface. Sand and dust may drift into the mouth of the tunnel, but that just needs to be pushed back out.

For your biomes, how deep is the sand? They may need to dig/clear the sand away and shore up the tunnel entrances to keep sand from collapsing into the opening, but once deep enough, the material may be sturdy enough to need minimal support and reinforcement for the tunnels and chambers.

I'm reminded of that sequence from Frank Herbert's Dune where Paul is buried under sand and must tunnel out. The task is impossible, because the tunnel collapses as its being dug. So Paul contrived to create a foam gun/nozzle and uses the foam to stabilize the sand sufficiently to dig out. So, constructional spray foam might be a tool your sand tunnelers could use.

Fuse it. You have a tunnel boring machine powered by a fusion reactor boils sand into rock vapour, and fuses a foot deep thick layer of sand into dirty glass.

The base unit for doing this does a 30-50 foot diameter tube (or more like a D with the flat side at the bottom.

A smaller unit with about a 15 foot section can be used to cut out individual caves on either side of the main passage. Do these with the right zigzag path and you can make non-trailer park arcitecture.

Or stick with the Big D passages. Homes are built under the floor.

Another possibility would be create synthetic rock by adding sodium silicate to the sand matrix to form a type of sandstone.

Simple: Give your creature who digs in the sand a water gun to saturate the sand, and make it stick together. That way, the tunnel won't collapse. Or pyrokinesis with fire/heat hot enough to melt the sand. Or enough strength to compress the sand into sandstone. There's a lot of ways that it can be done.

Not the answer you're looking for? Browse other questions tagged construction deserts coasts .

3
How can a constant sand storm be explained?
12
Bridge over Lake Baikal
13
Architectural considerations for a city in a wind tunnel
12
How high can a city be built on a mound in a flood plain?
9
Rocky desert or Sand desert - Which would appear in this scenario?
10
How could Dwarves prevent sand from filling up their settlements
2
Implications of ocean basins filled with coral sand
1
what I need to make mirage to constantly occur in sand desert?
5
What would make swamp infrastructure viable?
5
Feasibility of a sand gliding creature?