Can I have sand in a desert that would make it impossible to differentiate between land and horizon?

I am looking for an end-result where one would not be able to differentiate between land and horizon. And I want it in a desert. So either some new, exotic material has to make-up the sand. Or it has to be mirage everywhere in the distance instead of some spots in the distance.

This is in a desert on a tidally locked planet where I want this 'transparency/mirror' effect. However, from what I know, sand has impurities and hence is not transparent.

It's not just a matter of impurities, it's the physical properties of the material making up the sand. The most obvious one is the refractive index. At first it doesn't seem like that big a deal because water (1.33) doesn't seem that different from clear silica (1.52), and silica is used for optical glass, but the important thing to remember is that the refractive index kicks in when light transitions from one material to another. When you look through a body of water, you're only looking at one location where the light is "bent", namely the interface between the body of water and the surface. But if you weren't looking through a single interface, then things become a lot more complicated.

For instance, look at this image: 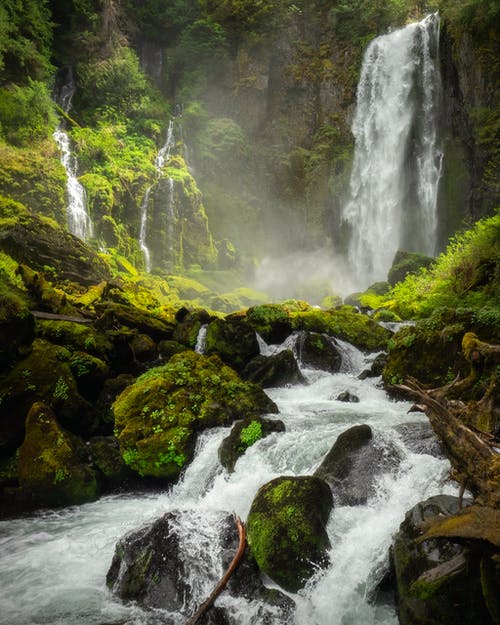 You can't see through relatively thin layers of water making up the waterfalls and rapids because you aren't looking at one transition where light gets refracted, but many as water and air are mixed and any given light ray transitions between water and air and back again many times, effectively scattering it. The total combined refraction means the material becomes opaque.

Here's another example from underwater: 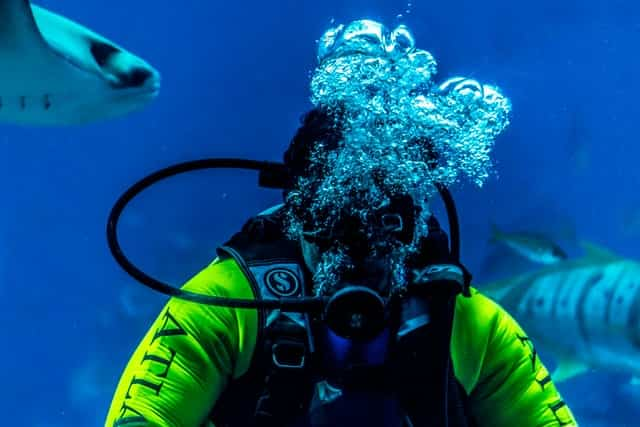 Notice how the mass of bubbles completely hide what's behind them. It's not a matter of the bubbles individually being hard to see through; after all, they're composed simply of air which, in the total amount present, would be totally transparent. It's all the refraction between individual bubbles and the water which causes the scattering of light which makes the whole thing opaque.

The same thing would happen if you had a bowl of optical-grade glass grains. Even if each grain was optically transparent by itself, the total refraction of all the transitions between glass and air would combine to make the material in the bowl opaque.

In fact, here's a picture of that very thing: 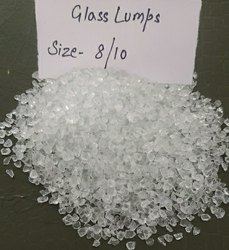 And the smaller you make the glass particles, thus creating more and more surfaces light is refracting through, the more and more opaque the material becomes: 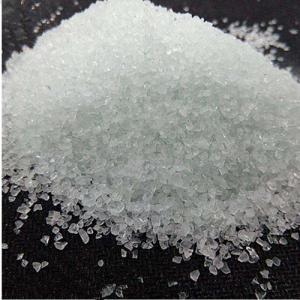 The only way your desert could appear transparent is if the material making it up has a refractive index exactly identical to the air, fluid, and any other material that may be between the grains, which all have to be the exactly the same as each other as well.

Even given the above, just because you have materials with the same optical properties doesn't guarantee transparency because you need near atomic-level matching perfection at the interfaces. Any kind of imperfection will result in diffraction and scattering. For an example, consider automobile safety glass. 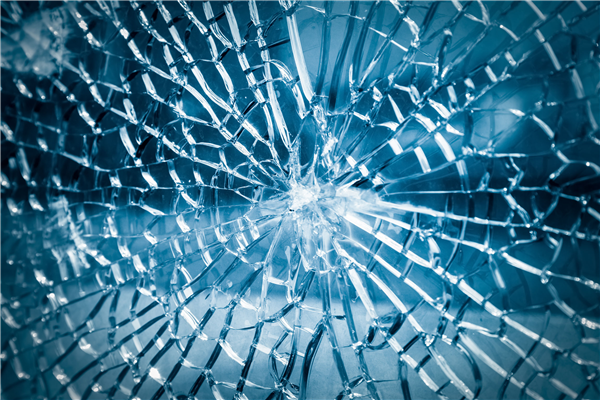 The exact same material as perfectly clear glass, only now it has fractures in it, and those fractures cause interfaces within the material itself where diffraction happens even though the material on both sides of the fracture is exactly the same. The result? Harder to see through. Enough fractures in three dimensions and on a small enough scale and you can't see through it at all, even though the fragments are right against each other. Internal fracturing is why, for instance, otherwise perfectly pure silica, calcite, or salt crystals can look cloudy.

Long story short, not only would all those materials making up the desert have to have the exact same optical properties, each would have to have homogeneous internal structure as well. So yeah, good luck with that.

If you want a temporary mirror you can look at Salar de Uyuni. This is the largest salt flat on the Earth. It looks like a white flat plains with hexagonal lines on top. It is exceptionally flat for nature's terms.

The magic happens after rain. A thin layer can sit on top and be practically still. Then the whole salt desert is transformed into a 129km (80mi) in diameter mirror. Pictures there are amazing, as the sky and the ground seem to merge into one.

It might be possible to increase the time it looks like a mirror. To achieve this you need a steady supply of water, which is calm when it is added to the salt flats. It then must evaporate, never taking any salt with it. My best guess would be many springs in the earth slowly pushing up water. The springs are fed by a large underground river, or cave systems pressurised by sea water and heat. Or the like. The problem with anything except rain is the movement. Moving water can transport and erode the salt layers. Still it might be possible to have long periods if time on a large scale a visually practically flat mirror. But if you only need it to be a mirror sometimes the Salar de Uyuni is your best bet.

I believe that a warm and very flat desert ought to be enough (the same can be obtained with a thin layer of water), but if you have clouds in the sky, then you will be able to differentiate very easily even if, technically, the horizon border itself isn't (easily) distinguishable: 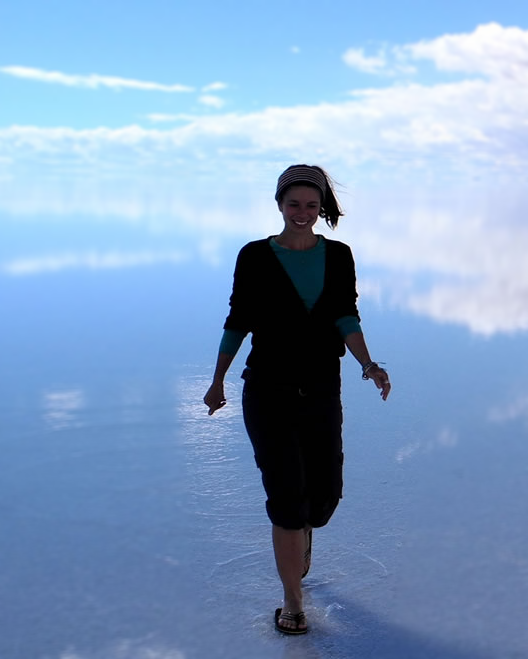 Alternatively, and probably more easily obtained, you can use dust to obscure the farther details: 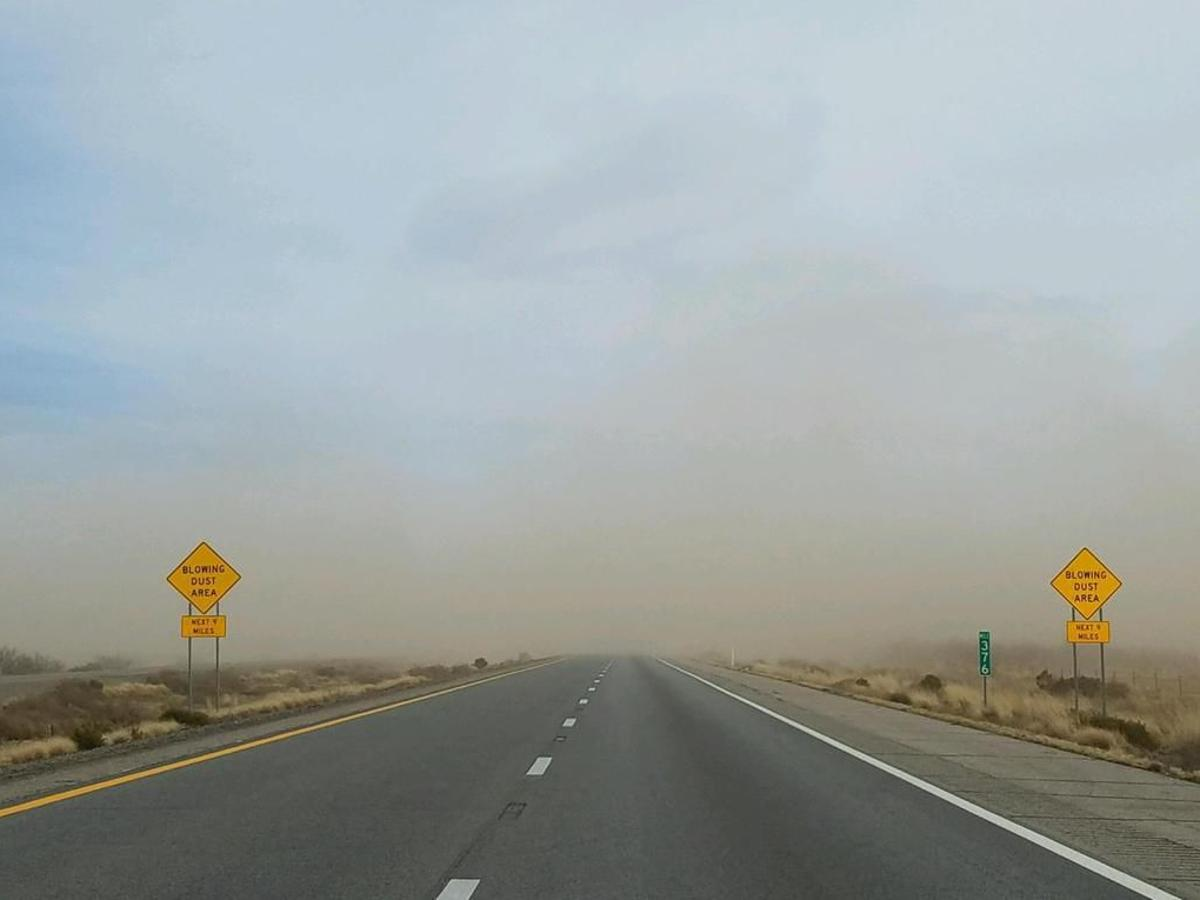 Finally, what I call the "Mesklin trick" (described in Hal Clement's Mission of Gravity): if the air density gradient is exactly right due to its composition and temperature at all heights - actually the first 400-500 meters is enough - then you can have the illusion of the horizon being at an infinite distance. Light attenuation and extinction will then obscure that same horizon (it will disappear in a bluish-white haze due to scattering), making it impossible to tell exactly where land and sky meet; that might also appear to happen at a higher altitude than the viewer, wherever they are, as if they were at the bottom of a bowl (which is why Mesklinites believe the world is a bowl with them at the bottom). 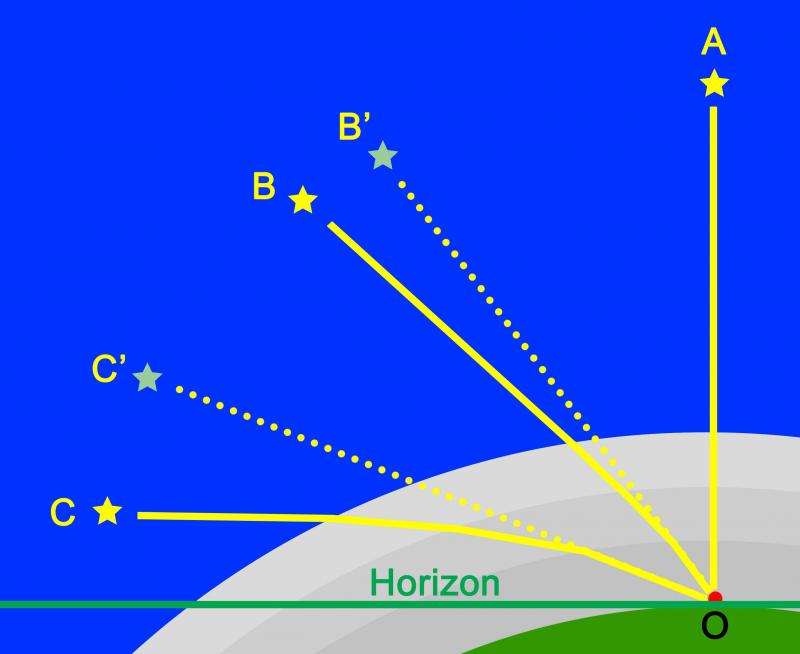 The Mesklin effect appears identical to a reversed Fata Morgana, but it obscures everything below those 400-500 mt of height (Fata Morgana on Earth is limited to a few meters at most: "above" that limit, things return visible). 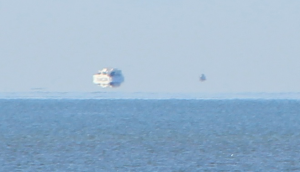 "Do you know of materials that can be used to create near transparent sand / dust?"

Fill the gaps between the grains with a liquid that has the same refractive index. The liquid doesn't have to be water. It could be some biological goo, or a clear oil. If the match isn't perfect, you would likely get something translucent, like slush (ice crystals in liquid water). If you get a perfect match, the solid can seem to disappear entirely.

You would still be able to see the horizon, though. It would look like a lake.

Or sometimes, the simplest approach is best. Instead of sand or dust, simply fill a valley with a lake of once-molten glass. (Long-term volcanic activity melted the sand, or something.)

"EDIT: to clarify further, I am looking for an end-result where one would not be able to differentiate between land and horizon. And I want it in a desert."

That's much easier! If you can't make the ground look like the sky, then make the sky look like the ground. A constant dust storm raising a 'fog' can make it impossible to see long distances, and hide the horizon. It's a common problem in snow blizzards.

Some regions of the world are covered in meters of a salt crust due to ancient lakes evaporating and geology being a cruel mistress. The evaporation process also makes these places uncannily flat.

The most famous salt flat in the world is Salar de Uyuni. Some parts of it look like what you ask in your requirement no. 2:

Or can I increase the temperature so much that the entire desert is in a state of a constant mirage from the pov of viewer so that the viewer always sees water on the surface which gives the illusion of transparency? 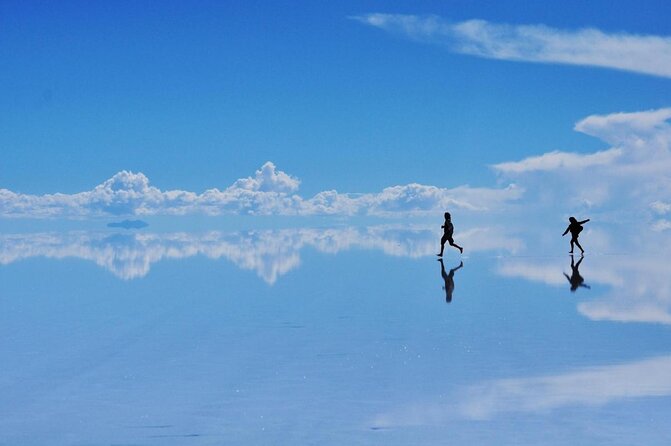 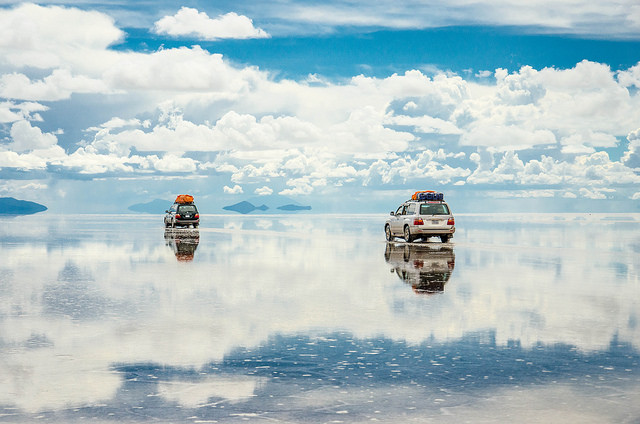 For an actually transparent desert, you need to fuse the material in a single piece, which will look more like a pond of glass than a sand desert. Definitively, that would be a desert, because no plant is going to grow in a solid glass surface, and a cool place.

To explain such a glass desert you need:

Btw, a transparent desert might be even cooler if there were something interesting to see through it. Embedded gems or fossil sandworms would look great.

Not the answer you're looking for? Browse other questions tagged science-fiction space artificial-intelligence deserts .

6
What astronomical considerations are necessary for the planet in this model to possibly be Earth-like?
8
How much heat/energy would be needed to turn a large section of desert sand into glass?
20
At what minimal technological level would the inhabitants of a binary planet system need to be to communicate with each other effectively?
9
Rocky desert or Sand desert - Which would appear in this scenario?
11
How can a desert have high humidity?
0
Would this region have a desert?
6
Does my plot point centered around eclipses make sense?
1
Properties of a planet roughly four times as big as Earth
7
Heating a gas giant's moons in a red dwarf system
1
what I need to make mirage to constantly occur in sand desert?