Effects on the Earth if the moon was at 1/10th current distance?

According to Wikipedia and this answer, the Moon is orbiting the Earth at a distance around 20 times greater than than the point where it would break up. As far as I can tell, that means in a fictional world, we could have a moon the size of our Moon, only ten times closer to the Earth (as in $\frac1{10}$ its current distance, or around 38,000km), with absolutely no fear of collisions or the moon breaking up.

Such a satellite would be quite a sight, lighting up the night sky (when its orbit matched up—I guess it'll be moving faster now) and just generally being the biggest thing up there (as far as appearances go).

What I'm wondering, though, is if there would be any geographical changes to the Earth as a result of this closer relationship with the moon (if you're thinking about this question, I checked; it didn't cover what I'm asking here). Would the Moon pull mountains from the depths of the oceans, or would its tides sweep away our coastlines? Would there perhaps be shifts in weather/climate (not sure if this can be considered geography, but I'd still like to know)?

Just as a hint, according to this answer, "tides are proportional to $\frac{\text{mass}}{\text{distance}^3}$", so a moon 10x closer would have 1000x the tidal forces. I assume this wouldn't lead to waves one thousand times higher than normal, but I can't believe that everything would be the same.

It would not raise mountains directly. However, the planet (and moon!) would likely be much more volcanically active. More, and larger, volcanos would result in a much more dynamic landscape.

Tides would also be much higher. Shorelines would be mostly cliffs and rocks and mudflats and would also result in a much more dynamic landscape. I would think that sandy beaches would be rather rare.

Any kind of docks would need to be quite a ways up rivers to be useful. Smaller islands would have to have floating platforms well offshore to do any business with passing ships. Small boats would then row or paddle the goods ashore.

Ships would absolutely avoid the seas around islands like those of Indonesia. The differences in ocean depth would change it between a solid landmass and a scattering of islands on a daily basis. Such islands may actually be uninhabitable, as they may be worn down almost as soon as volcanos would raise new ones, not allowing time for life beyond birds to really set up shop.

Well, the prevailing theory is that the Moon did form about 10 times closer than it currently is, after a giant collision between proto-Earth and a Mars-sized body.

The Earth back then probably had 5-10 hour days, and the Moon was about 24,000 km away on formation. It has been moving apart due to tidal interactions, which have also slowed down the rotation of the Earth.

Notable effects would be:

Note that the effects would be strong enough to cause to moon to recede at a noticeable pace, so it would probably drift away significantly in the first million years: 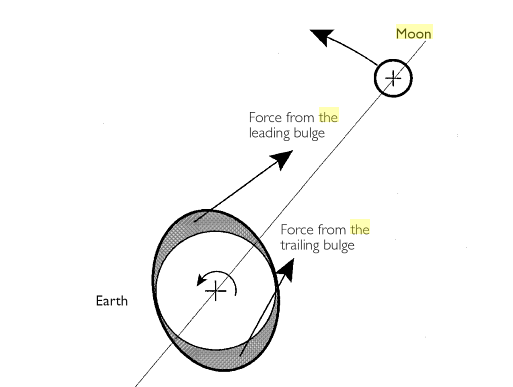 It will affect Earths magnetic field, people without sun creme with 1.000.000 factor would "have a very bad day" because of the heavy particles would reach the atmosphere, and the tidal waves would make quite an surf experience.

Geomagnetic changes would trigger a lot of rapid geological effects boosting volcanic activity, and Earths central mass would be "shifted" due the gravitational pull so the effect would be disastrous and equal to an extinction of complex life on the planet if not a complete annihilation of the planets biosphere and the planet itself since at the distance the moon would sooner or later be pulled out of its already unstable orbit toward earth (guess) and well - nobody would live to tell the story what was after that.

Not the answer you're looking for? Browse other questions tagged geography moons or ask your own question.

11
If Earth and the Moon's Relationship Were a Bit Closer
6
How could I make the moon appear larger?

14
What are the expected impact on Earth ecosystems by mining activities in the Moon?
10
What are the requirements for an atmosphere retaining moon with a stable orbit around an Earth-like planet with non-destructive tidal forces?
11
What are the parameters of a planet having multiple moons?
6
If the Moon Titan Orbits Earth
22
Reality Check: Habitable moon around earth-like planet
3
What would be the effects of a large moon?
5
Will be possible in the far future to create an artificial Moon for Earth and terraformed planets?
0
Tides on a Super Close In Moon
4
How would eclipses change (both solar and lunar) if the moon was half the distance from the Earth?