What would be the effects of a large moon?

I am considering writing a fantasy novel. This novel would be set on an earth-like planet, but certain story details require that the planet have either a much larger or much closer moon than Earth does. I'll be honest and say that I know virtually nothing about planet mechanics, and don't know what the differences would be between having the moon be the same size but closer, or the same distance away but bigger, than our Moon. Some insight into those differences, if they are significant, would be appreciated. 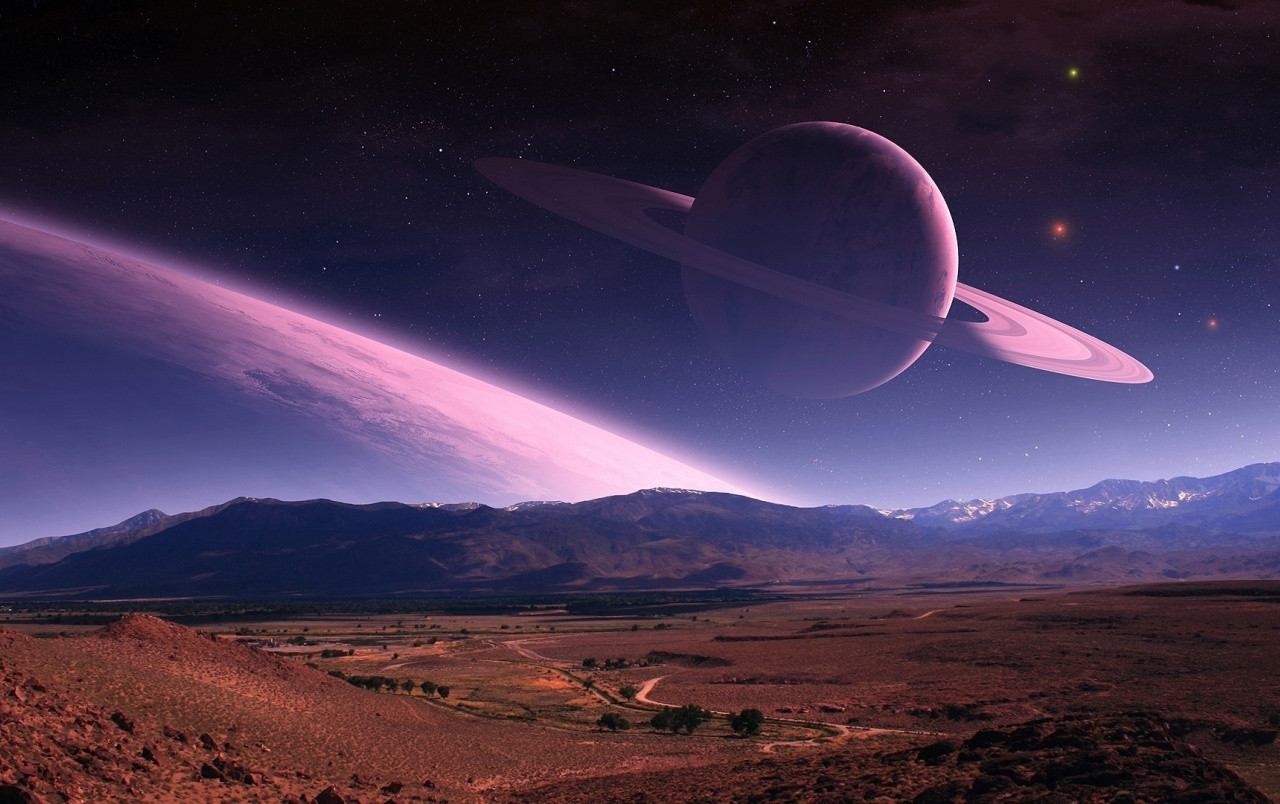 This is about the size of moon I want. Note that I am speaking of the smaller, ringed planet/moon, not the second, much larger, planet.

What I'm after are all different effects (different from our own Moon) of having such a moon on water bodies, but also climate, weather, geology, and anything else which might be changed by having such a large/close moon.

For all purposes, assume the moon is of the exact composition of our Moon, just larger/closer. A comparison (if there are significant differences) between having the moon be larger versus having it be closer than our Moon would be appreciated.

NOTE: If additional details are required, I am happy to provide them. Please let me know what you need via a comment.

I'm afraid there is a vast of tiny details, way too long to be counted, that would be affected by such a large moon.

It is believed that our moon, Luna, was formed between 20,000 and 30,000 kilometers away from Earth, and it drifted away to its present position. When it formed, its apparent size would have been about 8º of arc, so pretty much like the ringed planet of your picture or even a little larger. If that's the case, let's see some things that the Moon is suspected to have done to Earth:

A single one of these things is enough to cause huge changes in the Earth as we know it. Increased vulcanism could put so much CO2 in the atmosphere to make a new Venus, for example. The Moon's shadow could have been the proverbial camel's straw who sealed the fate of snowball Earth.

This is a highly complex, chaotic system. Tiny differences in the origin can produce mind-blowing changes in the long run, and you are talking about introducing a huge difference so, how much different to Earth you want your planet to be? Because anything could happen. Had the Moon stayed in its original orbit the Earth could be now a soaring hellhole like Venus or a frozen planet like Mars or absolutely anything in between.

Well, tides would be a lot stronger. Also more of an effect on the planet's crust. It should have more volcanoes, and probably smaller more fractured crustal plates which might lead to smaller continents.

I think you'd get more full eclipses. It might have an effect on local temperature and weather. However, that might depend on if the moon's orbit is exactly lined up with the star system's orbital plane. As an extreme example if it orbited at 90 degrees to the star you'd only get eclipses twice a year.

If it's really large and close I believe (no evidence on this) that it would tend to pull off the planet's atmosphere. There might be a shared atmosphere around both the planet and moon. Which would cause drag and over enough time might lead to the moon crashing into the planet.

Oh, and I can't remember what the experts call it (Roche Limit?) but at certain distances which depend on planet size, moons can't form, they become rings instead. The tidal forces on the moon are too high.

Not the answer you're looking for? Browse other questions tagged science-based earth-like moons .

7
Larger moon = Larger Tides = No oceanic ships?
0
How big could a moon be before its orbit became too unstable or tidally locked to its planet

24
What would a habitable moon most probably look like?
12
A world with a moon orbiting much closer than ours
4
If Earth had an ellipsoidal moon, would that change tides and such?
6
Almost tidally locked to moon and the tides it would create
1
How Would the Moon Differ From Our Own for an Alternate Earth With No Seasons?
4
Secondary moon with negligible effect on planet
7
Would it be possible to have an earth-sized planet have much larger tides while remaining habitable?