Atlantropa was a geoengineering project to build a series of dams across the mediterranean sea to slowly drain it creating new land, satisfying the energy requirements of europe and even merging the subcontinent with Africa.

Here is a wikipedia article: https://en.wikipedia.org/wiki/Atlantropa

And a few images: 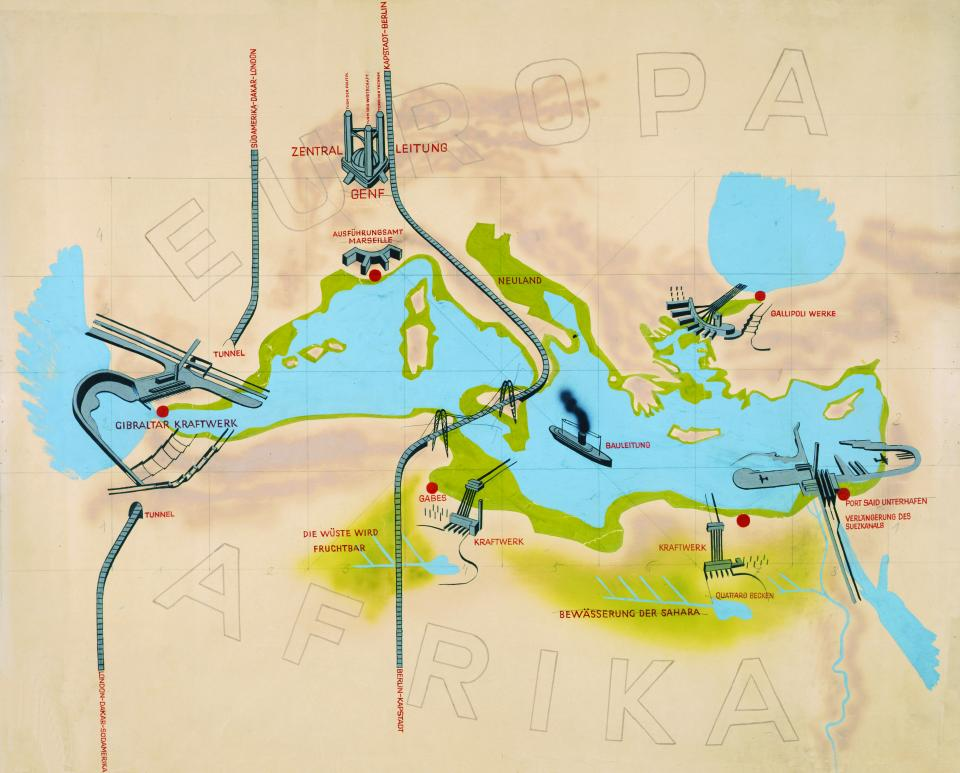 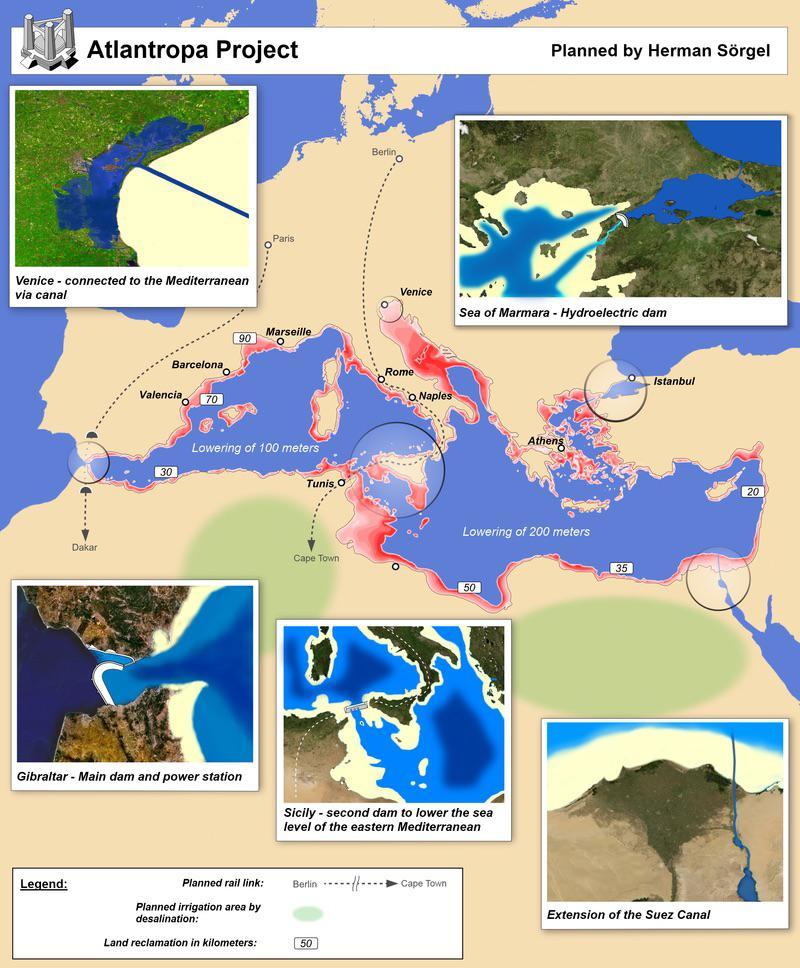 I have been considering something similar happening in my own narrative project as well, specifically by being part of the world's lore, though not as radically as the source material and definately not for the same reason.

The idea is essentially that in order to cope with raising sea levels and climate change (brought by their rampant industrialization and urbanization) the civilization inhabiting the tropical earth-like planet my project revolves around built dams and barriers to preserve/reclaim important lands across the globe while also exploiting tidal and hydroelectric energy to 'terraform' these lands to a useful, fertile state (through desalination of the water, the creation of artificial bodies of freshwater, while also synthesizing nutrients) and increasing their power over the world. One thing is for sure though, they'd not be brazen to the point that they'd actually dry bodies of water up.

Would such a drastic response would be warranted, sensible and feasible? Especially in the face of a serious climate crisis? And would it actually be beneficial?

Another real world reference would be this: https://en.wikipedia.org/wiki/Northern_European_Enclosure_Dam

Just so we are clear the civilization is very very advanced, akin to early to mid 22nd century humanity and have achieved advanced nuclear technology, quantum supercomputers and internet and are spacefaring (they have outposts across the solar system).

If the civilization is very advanced, and has atomic energy, especially fusion energy, they don't need vast dams for vast amounts of hydropower.

They can use some fusion energy to power food synthisizers. And if they haven't developed food synthisizers yet, they can build vast indodor hydroponic and aeroponic farms with the "sunlight" from electric lamps. See various questins and answers about how much land or in that case "land" is needed to feed someone.

Similarly, they can build cities inside vast climate controlled buildings. A city with a hundred levels of single story "buildings" and a little over 1,000 feet tall would occupy as much space as a city with 100 times as much area of single story buildings built on the ground.

In sort, such an advanced society should be able to house and feed a much larger population than present day Earth on a much smaller proportion of the Earth's land area. Thus they would not have much trouble with rising sea levels.

Thoughthey would want to build dykes around many famous cities to preserve them as islands amid the rising waters.

They can produce all their engergy from fusion, various forms of solar and wind power, etc., elmininating all need to burn fossil fuels and release carbond dioxide into the air.

Thus they can stop adding to the problem of global warming. And they can build vast hydrogen fusion powered facilities to captured carbon dioxide from the air and convert it to solid compounds, which can then be buried. Thus they can work to reduce the carbon content of the atmosphere faster than it would naturally decline.

And they can build gazillions of mirrors and put them in deserts and floating in equatorial sea waters to reflect some sunlight back into space, to help cool the planet.

Not the answer you're looking for? Browse other questions tagged climate engineering climate-change water-bodies macroengineering .

2
At what point in climate change do we reach the Tipping Point?
7
Is it feasible to separate the Mediterranean from the rest of the world's oceans using dams?
11
Atlantropa: How bad could it be
3
Climate Change after a Sudden Drop in Emissions
6
What would happen to the climate if Earth's sea-levels rose 2000m?
4
Would sea levels drop in a Younger Dryas-type event?
3
Refugee actions due to climate change + water crisis in Bangladesh