Is it feasible to separate the Mediterranean from the rest of the world's oceans using dams?

In my world, Southern Europe, Northern Africa and all the territories surrounding the Mediterranean belong to a single empire.

They are a mighty empire and are willing to make this a massive project with a humongous amount of resources allocated to it. They are willing to spend decades if need be.

The motive for doing this is to gain more land-area. 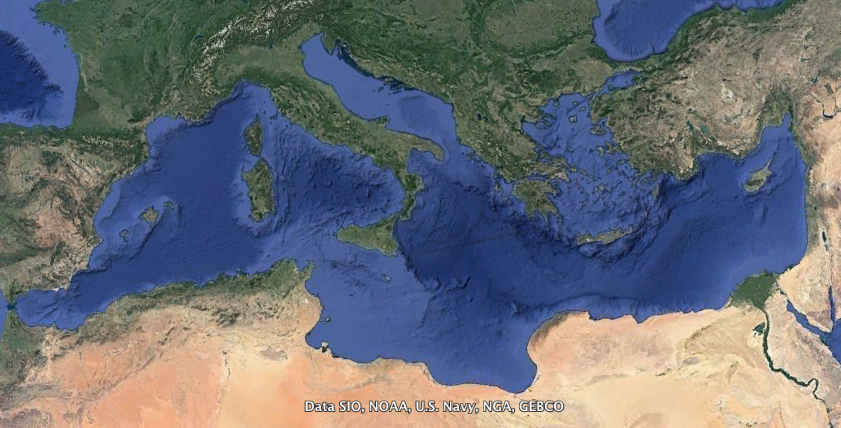 They're planning to build a dam across the strait of Gibraltar to hold back the Atlantic.

The empire also controls all land around the Black Sea. They don't mind draining it. But if it presents big challenges, they may also consider simply building a second dam to hold the Black Sea back.

No elements of fantasy or hand-waving are allowed. This needs to be explained in a scientifically sound way.

Please note that while this is indeed similar to Atlantropa, it is not identical to Atlantropa. For example, the Empire intends to drain the whole Mediterranean, not just parts.

Is the Gibraltar dam feasible?

The Strait of Gibraltar is 14.3km across and up to 900m deep. The highest dam in the world is Jinping-I at 305m. The largest by volume (of the dam itself) is Syncrude Tailings Dam in Canada at 88m high and 18.2km long. For reference Three Gorges is 2.3km long and 181m high, and is the 21st largest dam in the world by volume

The structural problem with the Strait of Gibraltar dam is its height. No other dam in the world is even close. I don't think any armchair material science/math is worth doing to support the science based tag, but I strongly doubt that ANYONE has done a rigorous structural engineering evaluation of a poured concrete structure that could handle this kind of pressure.

Thus the remaining option is simply an earth-filled dam. If we assume, for safety, that we want to make the dam 10km long along the strait (in addition to 15km wide across the strait, and up to 1km tall (to account for the depth). I will assume the depth profile is a simple 'V' (300m depth at the edges, 900m in the middle) with a 600m depth average, then the total volume of fill is 90 cubic km.

90 cubic km of rock weights 240 billion tons, at 2.65 g/m$^3$. Assuming the average rock has to move at least 100km from where it is dug (the Saharan Atlas would be a good source of rock) up to the Strait, that would take 24000 billion km-tons of freight rail, which is more than double the 10000 km-tons of freight rail moved annually, worldwide.

The US produced 2 billion tons of construction aggregate (I couldn't find a world figure) and the world produced 3.2 billion tons of iron ore, so the amount of material that has to be mined is probably an order of magnitude higher than the total annual mining production on the planet.

While I can't say all those numbers mean the dam isn't feasible, I would at least say that creating the dam is a decades long project, considering that the investment in mining equipment and rail transport will probably cost as much as if not more than the actual construction of the dam.

Keep in mind, if you want to actually use the dam for hydro-electric power and not just as a big earthen ocean-stopper, you will need ALOT more concrete. Since total world production of cement is 1.7 cubic km a year, you may have to invest in a lot of concrete production, which in turns means investing a lots of power to drive that very energy intensive process.

Will the Black Sea dam be needed?

The Black sea is good for fishing and helps moderate the local weather. I would not empty if it I didn't have to. If you are already spending trillions/decades on a Gibralter dam, you can probably afford a Bosporus dam as well.

Are any other dams needed to separate the Mediterranean from other oceans?

I don't know if the Suez canal exists in your world, but that would need to be stopped up too.

Are there any other significant challenges that might make it impossible to hold the Mediterranean separate from the world's oceans?

A thought to consider: what would the climate be like in the newly exposed region of the Mediterranean basin? Here are some possibilities. The basin would be in a location with little inflowing moisture. The Sahara desert is to the south, Northern Europe isn't actually that wet and any moisture from there is blocked by mountain systems (Pyrenees, Alps, Dinaric Alps, Balkans, Taurus, etc). It would probably be very dry. It would also probably be very hot since it is so deep below sea level. The Dead Sea is at the same latitude, and is the only comparably deep place on earth. It is not called the Fertile Sea.

The Mediterranean sea is the source of the winter rainfall in North Africa, Italy, the Balkans and Turkey. The massive summer evaporation drives rainfall in the high mountains surrounding the sea, in turn powering the rivers. If you remove the sea, you remove the rain. The whole region turns into one huge continental desert surrounded be mountains. Compare to the Tarim basin in China.

Why would this civilization go forward with this project to turn their Empire into an arid wasteland? Who wants more land area if it is like that, and comes at the cost of reducing the rainfall in the already productive parts of the empire? And why remove the wonderful internal lake (Mare Nostrum?) that provides everything from fish to beach holidays to cheap water transport? Building this dam would be suicidal.

The short answer is "of course"; given the investment of sufficient time and resources. Atlantropa was well thought out and entirely plausible given the technology of the era.

Alantropa's series of dams across Gibraltar and the entrance to the Black sea are sufficient in of themselves. The real issues are not so much getting a dam built, but the issue of allowing access of shipping to and from the Atlantic and to and from the Red Sea. So part of the plan will have to be modified to provide a series of locks in the Atlantic dam and to extend the Suez canal into the shrunken Mediterranean sea and provide a series of locks as well. Of course another channel and locks will be needed for the Black Sea as well.

Sadly I was unable to find an estimate of how much material would be needed to build the dams for the Alantropa project (and including the mid Mediterranean dam linking Sicily to Africa and Europe). The calculations that were done between the 1930's and 1950's seem to indicate that it would take 35 years using the technology of the day. Building the same project using today's technology might not actually be any faster, since much of the time would be digging, mining and transporting materials to build the project, and some of the bottlenecks would not be breakable with current technology (for example the railroad tunnels and bridges might not be capable of being enlarged or "doubled" to handle the increased volume of traffic).

Other bottlenecks could include how many trained workers can be diverted from other areas of the economy, and how much investment capital can be diverted from other investments. While the political authorities may be capable of diverting any amount of capital and labour to the project, the market has various ways of responding to distortions like that, including inflation or deflation, price swings and other follow on effects. These are not quantifiable without much more detailed information, but there certainly will be effects on transportation, the construction trades, mining and quarrying and energy, both during the period when the project is absorbing these inputs, and later when the project is complete and the huge capacities created to support the project become surplus or idle.

So one of the biggest issues for the Empire in this timeline isn't the physical project itself, but dealing with the second and third order effects caused by the mobilization of capital and labour to build the project.

An earthen dam is the way to go.

As far as moving the earth, here's the key to the whole thing: Don't handle it dry. All the dam materials get handled as a slurry. No endless parade of trains and trucks, just pumps running 24x7. The thickness of the dam is limited only by your patience. I am a huge fan of making dams much, much thicker than the engineers say they need to be. Watching the torrent of water do absolutely nothing, "Dear God, what were we thinking, why did we make the dam so thick" was said by no one, ever.

Now if you have the time, before you seal it off, you gate it for one-way flow. Let the stream of water from freshwater rivers keep the Med full but slowly reducing its salinity, like the Baltic.

Meanwhile you may want to think about a system of canals along the south edge of Europe connecting the river outlets, Bosphorus and Nile to their ultimate outlet, the Suez Canal. This preserves navigation from the Atlantic to the Danube, Odessa and the Arabian Sea. Again, you are much better off placing the materials before you drain the Med.

Not the answer you're looking for? Browse other questions tagged science-based reality-check geography geology engineering or ask your own question.

6
How to drain out the entire Mediterranean?

8
How could state borders equal major watersheds?
6
How to drain out the entire Mediterranean?
16
Would a Roman civilization be willing and capable of building large scale sea defences against a serious but unrealised flood threat?
3
How to Construct Politics of Nations?
19
How to let a king be lost for a year and return back to his country, to regain his title without any problems?
5
How likely is it that an interplanetary empire could exist in the future?
2
Perfect age for brainwashing children without it being too early to show intelligence and/or athletic ability?
3
How feasible would a Gaza - Gulf of Akaba canal be, purely technically speaking?
3
Any advice on what is a realistic way to use plate tectonics to create landmasses and barriers?