Would sea levels drop in a Younger Dryas-type event?

I was imagining a sort of post-apocalyptic/collapse setting, where a few centuries of climate catastrophes brought on by climate change cause essentially your general end of the world as we know it due to droughts and storms and floods and sea level rise and warfare, etcetera, but not so dramatically that no society can rebuild.

But then, the fears of the early 2000s comes true, and the melting ice disrupts ocean currents and causes a massive cold snap on the scale of the Younger Dryas, which completely messes up the trying-to-recover societies' efforts.

My question is basically how long would it take for sea levels to begin to drop? Assuming this period lasts about as long as the irl Younger Dryas (1200-1500 years), would sea level rise caused by modern warming be reduced? Would it even last long enough to have a meaningful effect? I was hoping that a major generational issue could be sea level drop making harbors harder to access, etc., but I'd like to know if that'd even happen to begin with.

(and additional references, if you were interested: Relative sea-level change in and around the Younger Dryas inferred from late Quaternary incised-valley fills along the Japan Sea and Sea Level Rise, After the Ice Melted and Today

Also a nice diagram from the last link: 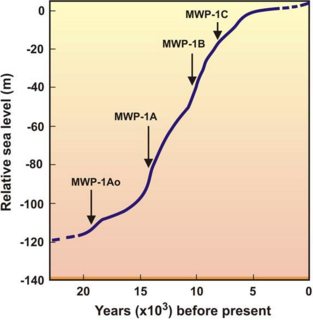 So there you go. No apparent drop over a thousand year cold period, but in fact sea levels continued to rise. Admittedly, this was in the face of a big post-iceage thaw, which is an even more dramatic bit of climate change, but it still doesn't bode well for your plans.

Best case scenario is that the anthropogenic rise is undone, though it likely wouldn't be as rapid as the original melt, because that can involve giant icebergs breaking off and floating away but laying down that same amount of ice afresh will take quite a few years).

I was hoping that a major generational issue could be sea level drop making harbors harder to access,

Probably unlikely, though ice blocking harbours would be a new problem for quite a lot of the northern hemisphere.

For every cubic kilometer of ice deposited in the polar regions, slightly less than a cubic kilometer of water (water expands slightly when it freezes) is lost from the oceans. How fast can ice build up on the Canadian Shield, North Slope of Alaska, Greenland, Ellesmere, and the arctic regions of Europe and Asia? How fast can Antarctica regain the ice it has lost in the past century or two?

My feeling is that this is a fairly slow process. It's limited by precipitation rates, and those are generally fairly low for arctic-climate regions -- the air entering those regions is already fairly cold, and cold air can't carry much water vapor. There might be an initial surge, if warmer oceans fed vapor into the rapidly cooling polar zones -- but the impact of a thermo-saline inversion would be to cool the ocean surface, at least in the regions that feed the Arctic.

So, expect it to take at least as long to lower the sea level as it took to raise it when the Younger Dryas ended (centuries or even millennia).

Not the answer you're looking for? Browse other questions tagged science-based reality-check post-apocalypse climate climate-change .

7
What would the world map look like if sea levels rose 49 meters
6
What would happen to the climate if Earth's sea-levels rose 2000m?
10
What type of chemical catastrophic event might reduce the bioavailability of iron?
3
What Else Could Reduce Global Sea Levels?
8
"Technological purge" in response to singularity-type event
2
In a world where sea levels fell dramatically, what effect would that have on life at the local level? (more in the body)
14
Reasons for a very small but very high mountain range in an area with no plate boundaries?
4
Altantropa vs Climate Change/raising sea levels?