The main issue of spin-gravity space habitats is that at some point the centrifugal force will overwhelm the tensile strength of the construction materials, even if perfect graphene were available. Thus, even the biggest spin habitats can't deliver more than a continents worth of living area per drum. One can of cause trade terrain features and gravity for more livable area, but even this has its limits.

Knowing that dynamically supporting a structure is usually the answer to get megastructures much bigger (think of atlas towers and dynamically supported orbital rings, which use mass stream technology), I was wondering if active support could be applied to Banks Orbitals and Ringworlds, which are usually considered impossible without unobtainium. Obviously, "materials" with high compressive strengths won't really help me here.

However the basic job of the spinning ring is to resist the centrifugal force. So what if we could compress the ring somehow to supply a counterforce. The main issue that arises from this is of cause that the friction between the ring, which will spin at hundreds of kilometers per second and basically anything, will have spectacular results. We would need a frictionless surface. For now, let's assume that the engineers got some kind of absolutely frictionless unobtainium coating. (maybe superconducting magnets could provide a frictionless interface?)

The basic design of such a structure would be a spinning ring around a central source of gravity and an encasing, slowly counter-rotating support mass. The support mass is well below its orbital velocity, thus it would fall down towards the gravity source. However, the spinning rings centrifugal force would balance out the forces.

I'm aware that the counter masses own gravity might become a problem at some point. At some point we might very well be dealing with a circumstellar donut planet, though I think the ring world would be the better bet from a construction materials point of view. I case the question comes up, where one would get the materials to build such a thing, this is pretty much per definition a K2+ project. So starlifting is on the table. And most of the support mass would most likely be metallic hydrogen stored in graphene and metal (what else to do with several planets worth of metals) containers.

The central object could be any of a number of options: a planet, gas-giant, star or black hole. It might very well be the power source of the whole structure, either a fuel depot, a Dyson Sphere or a Penrose Sphere.

I such a structure fundamentally possible? Did I mess up the physics somewhere? Could magnets handle the pressures of the interface?

Use an outer bearing ring that does not spin and is solid metal (or glass fibre - whatever's handy) with a superconducting inner surface (making stuff cold is cheap in space - possibly nitrogen filled heat-pipes from the inner surface to the shaded outer surface of the bearing.)

Mag-lev the spinning ring off the stationary ring.

The stationary ring can reduce the load on the the spinning ring in two ways.

By its own tensile strength which does not need to compensate for a spin it that does not have, and by its weight in the stellar gravity.

So in essence the spinning ring is a mag-lev train running inside an iron hoop. It could be thought of as an inverted mass-stream the spinning ring being the mass stream that keeps the stationary ring in tension.

As pointed out in Ringworld Engineers a method of station-keepeing is still needed, perhaps solar sails would be enough.

I don't know if this will work; I haven't done ALL the maths, but my gut, mspaint, and the John Hopkins Uni Truss Simulator all suggest it'll work. So I'm presenting it; here goes: 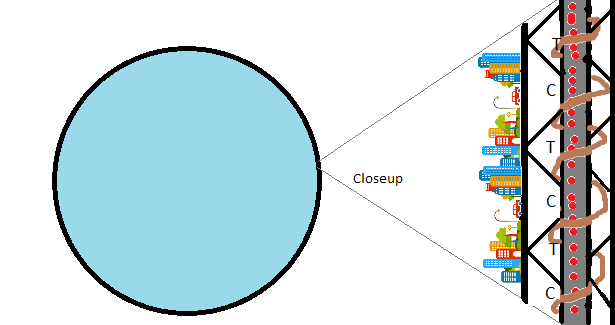 Underneath the buildings, is a large tube kept at vacuum (shown in grey), which has metal pellets (shown in red) running through it, with large coilguns (brown) applying force from the structure into the pellets. They can apply both positive and negative forces, which result in both compression and tension respectively.

Centrifugal force (acting as a sheer force on the "ground" members) goes through the truss, which is redirected to alternating compression (C) or tension (T) on the wall with the tube in it, of which the compression and tensions is absorbed into the pellet stream by either accelerating it or decelerating it.

This would also be used to counter wobbles, vibrations, and help stabilise the spin speed to an exact day length.

On the other hand, a ringworld with a 24-hour period (and no central object) could be built from existing materials and placed in a suitable L₄ or L₅ point (or some other stable orbit). Depending on the orientation, seasons would be odd.

As @GOATNine said, there is no good answer as we could find some cool stuff in the future.

But the same argument has been made with FTL that "maybe in the future it is possible". And as with FTL, I would say structures of this scale are impossible.

It's kind of insane to think that something like this, even if you could build it, would survive even a day of operation. Not to mention that you need to make stuff up just to make it sort of maybe possible.

The main problem I see is just the amount of force that rests on the ring. It's quite simple and we don't even need fancy equations, you can't build something this long without any supports.

Of course, this is where your active support comes in, but it doesn't really solve the problem. The best I can see MAYBE working is a metric f*ckton of other rings that each rotate a bit slower until either gravity or the amount of rings deal with the problem. So in a sense, you would have a few 100 rings or so resting on each other. Although the otter most rings would probably be more massive than the star itself.

But even this layered approach won't work too in any realistic scenario. I mean it probably could work if the outermost rings are 10.000km across and more massive than a black hole.

So in the end, as with everything, there might be a way to do it, but it's one of those "you really can't do that" way.

On a different node, if you write a story and really want a ring world, just make some material up that can support it. If you try to make it realistic people will get pissed. Nobody is going to blink an eye when you say "di-calinium is a meta material with the property that its tensile strength increases when an electric current flows through it". Does it make sense? No, but it's better than to try and force something that can work.

Yes, but it would be fail deadly

Active support rings not in orbit can be suspended above black holes as put for by a crap ton of exotic-hard science fiction.

That being said, such a thing wouldn't be especially safe. Considering the scale of a bank's orbital such magnetically contained pellets and dust would be moving at a non negligible fraction of causality, and so carry a crap tone of energy. If the magnetic containment broke, you end up with a rail gun inside your habitat on top of a lack of support. Yikes. Not to mention the power required meaning you'd probably be better of with something passive, like solar panels in orbit around a star.

Or in other terms, yes, but such a structure would be fail deadly, even with some redundancy.

The best we can do is a ~10T magnetic field. Let's see how far that gets us.

The pressure works out to B^2/2μ0, or ~40MPa. How does that compare with mundane solutions?

Answer: terribly. The tensile strength of carbon nanotubes is in the 10-100 GPa range.

Your scheme should work. The active support structure is spun the way you say, so that gravity and centrifugal force cancel out, with standard Ringworld attitude jets. We fill it with liquid helium-4 (the common isotope) at 2K, i.e. a superfluid with no viscosity. Inside that, we erect a ring-shaped environment with zero buoyancy. No matter how fast it is spun, its weight is the same as that of the helium (barring relativistic mass considerations, but we have a ballast system to keep things adjusted precisely).

This should be entirely feasible with current technology and no exotic materials other than what are needed to keep the Ringworld cylinder from bending/breaking under a 1 g load. (Try not to overheat the helium, because then there would be ... a mass flow)

Consider a stacked series of thin plates of alternating electric charge. Now consider taking such a stack and bending it into a large ring.

Now, consider CCTO ceramic. It has been manufactured with a dielectric constant of up to 10^5, and a breakdown voltage of 2.38GV/m. (Admittedly, not both at once yet.)

This works out to a corresponding max pressure of ~5TPa. (I'd take this number with a grain of salt - this is large enough that these approximations will come back to bite us.)

How does that compare with mundane solutions?

Answer: quite well. The tensile strength of carbon nanotubes is in the 10-100 GPa range.

(That being said, you'd end up requiring a fair bit of energy to ensure that said capacitors remain topped up, and a single short could cause the entire megastructure to collapse...)

Not the answer you're looking for? Browse other questions tagged science-based physics megastructures macroengineering .

7
How fast must a planet with 1.27g spin to allow for space elevators?
43
Can Cloud Nine be built?
6
What sort of forces can be expected in the sudden stop of a rotating space station ring?
5
Can this ship exist within our current laws of physics?
3
How can a Dyson Sphere be built with minimal orbital disruption?
7
A self-eclipsing orbital ring
22
What is the best design for docking onto a rotating space-station?
20
What is the largest 'hollow' space structure that can be created?
8
Shape of a habitable neutron star?