How would fast rotation affect gravity?

I have a planet which was created by a God, who is experimenting with it by making it spin at an incredible speed. At the equator, the gravity is reduced to half by the centrifugal force generated by spinning.

This God has been preventing collisions from meteors and the likes which would likely disrupt the experiment. The planet is made from a material which maintains its shape under these extreme conditions, so the planet remains spherical. The God places people on this planet. They can breathe, and have everything they need. This is an experiment, and the God doesn't care whether the people die or not.

My question is what the "gravity" will be like.

My question is not about atmosphere, whether the people survive, tectonics, the colour of the guy's T-Shirt, or any other details. This is a heartless God who is dropping humans onto this planet in an experiment, like how a child may drop insects into water to see what will happen.

The planet is earth-sized with 1G of gravity. The frequency of rotation is such that the centrifugal force reduces "gravity" to 1/2G at the equator. If you started at the equator, and moved towards the pole, what would the apparent "gravity" be like? I'm particularly interested in the strength of centrifugal force in proportion to gravity, their directions, and their resultant vector. 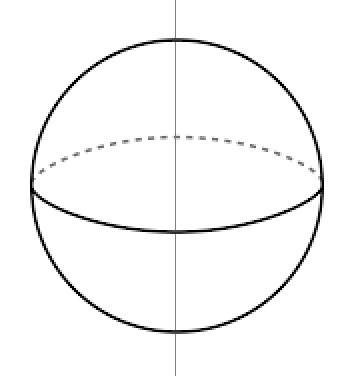 The Coriolis force is proportional with the angular speed, so would be only about 12 times stronger than on Earth; it will still be quite small.

If planet is rigid (a God that can have something the size of a planet remain spherical under such extreme conditions can, obviously, do what He pleases) all of it will have the same angular speed.

In this condition centrifugal force will be proportional to radius (distance from axis, in this case): $F = M \omega^{2} r$ this means it will monotonically decrease from Equator to Poles. No way it can overcome gravity in any place.

Actual force, using latitude as free variable would be:

Effect of being spherical, anyways, would be rather strange, because ground would seem to be on an incline pointing towards equator.

Your God must be working hard to keep all water in oceans from "going down" toward Equator.

Maximum distance between composed gravity and perpendicular to ground would be at $\pi/4 = 45°$.

I've been thinking that if the structure is kept as spherical despite the fast rotation, then all liquid water in the oceans will flow towards the equator. If the planet is allowed to become oblate and balance the forces, this will not happen. People standing somewhere between the pole and the equator, would feel, under your set of conditions, that they stand on a slope and would incline themselves towards the pole. The reason :

If the planet was held into a sphere no matter what, gravity would feel the same everywhere. Gravity will always point to the center of the planet. On the other hand, centrifugal force points away from the axis of rotation and is parallel to the equatorial plane, not the planet's surface. It is strongest at the equator and zero at the pole. Adding-up gravity and centrifuge will give inhabitants a weak gravity at the equator: gravity and centrifuge are opposed. Standing at the pole makes you feel heaviest as centrifugal force is zero. Between the two, the centrifugal force points away from the axis of rotation. This compares to standing on a carouselle, and you must lean towards its center to balance.

I'm going to let Michael answer you, at least partially. I've linked the video to a precise moment but the whole video is worth watching, really.

To sum up what is said in the video, the gravity (as a force) would not be affected by a faster rotation. To be more precise :

• The centripetal force (generated by gravity) that pull you towards the Earth is constant.

• The rotation of the Earth gives you a velocity, and this force is always tangential to the surface of earth (if there was no gravity you'd be thrown in space because of that force).

Interesting numbers of the video :

• If Earth spun 17 times more faster, the sum of the two forces would be 0, meaning we would be floating around.

Edit : Apparently the link does not redirect where i wanted to in the video. It's @4"11 seconds

Other answers on this thread are far more mathematical - this one might be useful for someone looking up for approximations or basic principle.

Incredible speed isn't so incredible if it's not fast enough to modify the mass of your planet. As others have pointed out, if your planet rotates fast enough, it might get pulled apart by centrifugal forces. But, if God made your planet, he surely must have thought of this.

So, let it spin so fast, that it's equator moves close to the speed of light. Not only will your planet be seen by observers as a massive celestial body, but if its mass and speed were large enough, it could radiate detectable gravitational waves (I think).

Edit: for the low velocity case in which the objects at the equator experience half of the acceleration compared to the ones at the poles: $a=g-\omega^2R=g/2 $, meaning $\omega=\sqrt{\frac{Gm}{2R^3}}$, with $G$ the gravitational constant. There always will be a centrifugal acceleration $g\cos \theta/2$ perpendicular to the axis of the planet. $\theta$ is the latitude. The Coriolis acceleration would be $-2\omega \times \bf v$. Plugging in some numbers, for an Earth like planet, you would see a rotation period a little under 2 hours. The Coriolis forces should be one order of magnitude larger on your planet.

Not the answer you're looking for? Browse other questions tagged physics gravity .

5
What would a world with uneven gravity look like?
11
How fast would a planet have to be spinning for the centrifugal/centripetal force to cancel out the force of gravity near the equator?
9
How could we create a pressure bubble on Mars without walls?
31
A planet rotating twice per second; what mass is needed to hold it together, and how oblate would it be?
110
Would planets be cubic in my "cuboverse"?
8
Life on giant planet | Can centrifugal force reduce gravity?
3
Ultimate fate of someone falling out of a skyscraper in warped gravity
1
Why would gravity/falling only affect certain ‘blocks’?
8
Preventing black hole formation in a water-filled universe