Properties of an Argon based gas giant

I am writing a novel where a habitable moon orbits a purple gas giant. In looking here and elsewhere I'm finding it incredibly hard to get a sense of the elements-breakdown of elements that would be present in a purple gas giant. This planet does NOT have to be habitable/have breathable atmosphere.

It's my understanding that with electrical charge that Argon appears purple. So my thought is to have a planet with Argon as dominant element. Ideal conditions would include the capacity for electrical storms/lightning that would make the planet glow purple(s).

So questions attached to this are: *Whether planet would likely have a solid core (if so what of)? *What other elements might need to be present to charge the atmosphere?

Another approach might negate the need for the planet to be a "gas" giant. Recent research posits that purple single-celled organisms ma have once dominated Earth's surface.

"There are a few variations of the Purple Earth hypothesis among scientists. DasSarma's research has focused on halophiles, microorganisms that still exist today in environments with a high concentration of salt, such as the Great Salt Lake and the Dead Sea. They use their strong purple retinal pigment -- the same visual pigment in the eyes of humans -- to absorb light and generate growth, and he says it's likely that they've been present on Earth for millions, if not billions, of years."

So - could this alternate planet be one with big salty ocean full of purple dominant organisms and/or purple bacteria?

I'd be skeptical with the way non-sci journals reports about sci subjects, do some fact-checking before.

Purple coloured organism are purple because they reflect the purple colour (replace purple with any colour and the statement remains true). With a purple life form, you'd like an energy source which radiates in the complement of purple. I don't know perhaps yellow/green? Like our Sun, maybe?

Case at point: purple bacteria use Bacteriochlorophyll a and b. The absorption spectra for the two show maximum absorption in IR, red and UV (plot posted inline below). Feeding them blue and purple would starve the bacteria of energy.

If you do want a purple light energy source, the best colour to choose for the organisms using that energy is in the red/orange/yellow (perhaps maybe green too) part of the spectrum. 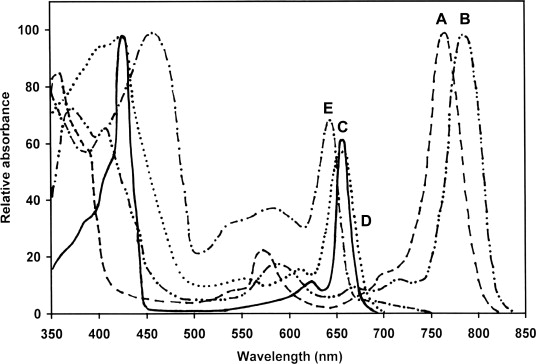 25
Can a gas giant have its own habitable zone?
5
Could this work? How to? Terraformed gas-giant
16
To make a gas giant flammable
14
What kind of Gas Giant has a "safe zone" between the radiation from a star and the radiation from a gas giant planet?
1
Explaining Planet Colors/Compositions
10
How could a breathable ultra-high pressure atmosphere form?
2
Could a habitable gas giant with an electropshere exist?
2
How plausible is my alien world? Effects of acidification
4
Is my gas giant possible?